“Being a volunteer and supporter of the event for thirty-one years, it’s an honor and a privilege to be included in the 100th event as Grand Marshals,” commented Jim Humphrey, who started volunteering at the Greeley Stampede when he was fifteen years old.  It all started when Jim would help cook and serve food for the night shows. Jim remembers, “the road crews would always look forward to coming to Greeley because they knew they would be getting some home cooking.” The family tradition continued with Kirsten joining the team and later their children. Kirsten fondly recalled memories of their kids and family being in the kitchen together and spending time at the event including a winning Mutton Bustin’ ride by their daughter when she was 6. 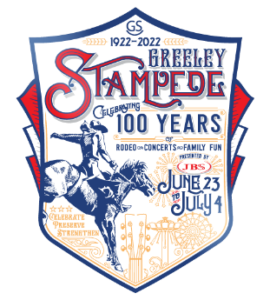 As time went on and their business, Power Services Company grew, Jim and Kirsten transitioned into becoming sponsors of the concert series at the Greeley Stampede for over 10 years. Jim explains their passion for the Stampede and their continued involvement as, “we’re not only sponsors, we’re supporters. This is a community event and I believe in it.” Jim and Kirsten’s involvement with the Stampede has made them more than just a sponsor, they are seen as part of the family.

Being Grand Marshals expands outside of the Greeley Stampede. Individuals, couples, or groups that are chosen also have dedicated their time and efforts to supporting the Northern Colorado community. Jim and Kirsten are pillar examples of this as they are involved in a wide range of non-profit groups including the American Cancer Society, the Weld Food Bank, and local school districts. They are always involved in some project and doing everything they can to raise money to support the community.

It is apparent that Jim and Kirsten are passionate about the Greeley Stampede as well as our community and we are lucky to have such enthusiastic supporters. It is these qualities that have earned them the right to be the 100th Greeley Stampede Grand Marshals.