CENTENNIAL, Colo. — The end of the school year comes with a lot of pride for students; they’ve made it through another year with a lot of accomplishments and learning under their belts. But few students have tangible examples of their hard work from throughout the year.

“Being able to bring people to see our work is just, like, the most satisfying thing ever,” said 16-year-old Zayla Macias, a sophomore at Smoky Hill High School.

Macias is also part of hands-on construction classes at Cherry Creek Innovation Campus (CCIC). This campus is part of the Cherry Creek School District and acts as a real-world training ground, providing Career Technical Education classes for all sorts of careers including construction. For Macias taking classes here was a dream come true.

At an event on the morning of Tuesday, April 19, Macias proudly posed in front of one of the five “tiny homes” that she helped build over the last eight months. She smiled for the camera, then showed off the aspects of the large workshop and tiny homes to her dad and stepmother.

These five tiny homes not only fill Macias and her 35 to 40 classmates up with a sense of accomplishment, but this project also connects with them on a human level.

“That’s probably one of the main reasons why I signed up for this class because it’s such a good cause. And I just like knowing that these homes are going to help, like, so many people,” said Macias.

These five tiny homes are going to the nonprofit Colorado Village Collaborative. The organization works to build a bridge between “the streets and stable housing by creating and operating transformational housing communities” with people experiencing homelessness. The Colorado Village Collaborative does this by creating tiny home villages, including the first one created called the Beloved Community Village. The Beloved Community Village currently has 19 tiny homes and will receive these five new tiny homes built by the students and teachers at CCIC at its new location, which later this month.

“We’re also trying to push things upstream and push larger social change, and that happens through education,” said Cole Chandler, the executive director of Colorado Village Collaborative. “So, kids having the opportunity to learn about this housing crisis while they’re in their education program and getting to actually get hands on and do something about it, we think is really valuable.”

Chandler was among the dozens of people who joined the “sendoff party” for the tiny homes Tuesday morning. All parents, teachers and industry partners were there to see the impressive build from these students — a fulfilled mission in the eyes of Mike Degitis.

“I said, ‘I’m going to teach kids the things that matter, you know, things that are going make them successful in their career,’” Degitis said about his transition from “typical” math teacher to the applied math teacher and tiny home project coordinator at CCIC.

“We’re all neighbors and we’re all part of the same community,” said Chandler about the current rise in people without stable housing. “Really trying to solve this crisis requires all of us taking action steps. That means putting down housing projects in our neighborhoods and welcoming our neighbors as such.”

For several of the students who helped build these homes, that mission is exactly what aligns with their personal views, like 18-year-old Jayden Stella, a senior at Eaglecrest High School.

“I’ve always been part of a very strong Christian community, which is all about serving,” said Stella. “I took it to heart because I’ve done service projects pretty much every year, and this is probably the biggest one I’ve ever done, and it hit me straight in the heart. I loved it.”

Stella’s career passions have been confirmed through this project and has a job offer to do residential electrical work after graduation. And he’s not alone. Macias, a sophomore, plans to return for the higher level building class at CCIC as one of the handful of girls currently in the program.

“I liked the construction unit because it was kind of just something different … And there wasn’t a lot of girls here, so just thought I should step in,” said Macias. “Like, our teachers and everyone just … want women in construction and they want more of us because, I mean, we’re pretty cool.”

As Macias, Stella and Degitis posed along with their fellow teachers and classmates in front of a finished tiny home, dozens of people took out their phones and cameras to capture the moment — a moment when a group of young adults helped make a difference in people’s lives.

“To know that we can … provide dignified housing, security, warmth and shelter to Denver’s residents that are most in need,” said Degitis “is something that just hits home for us.” 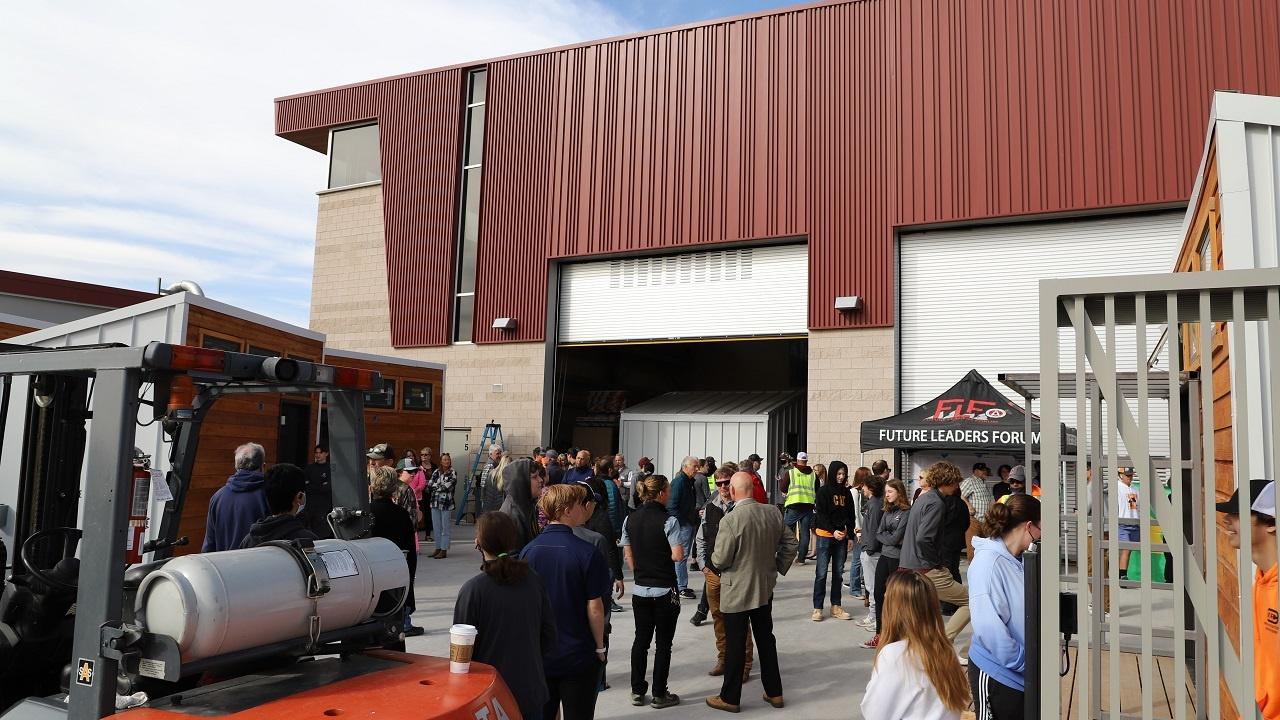 Many people from the community came to view the finished tiny homes.