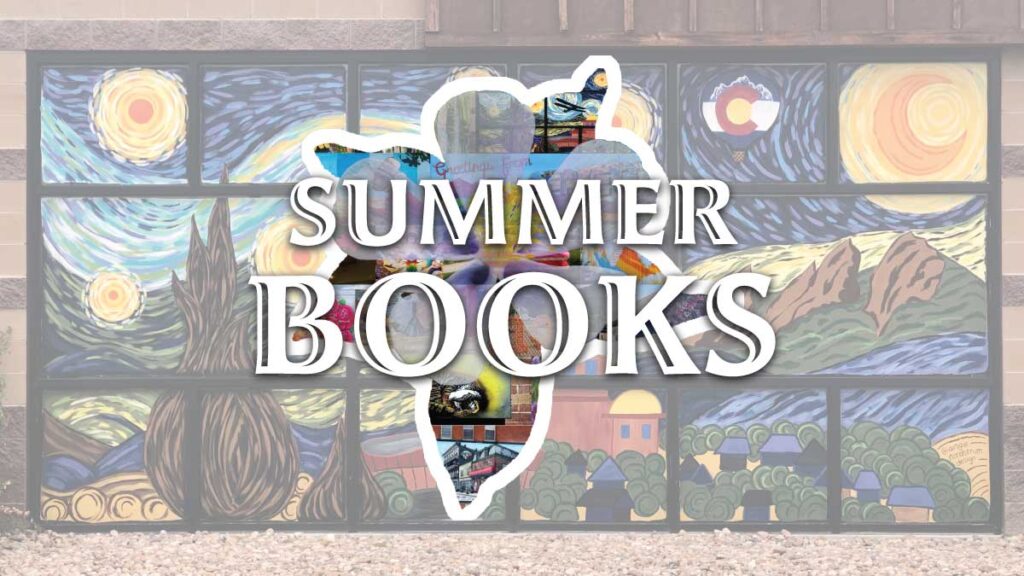 Good poetry leaps from the page, wraps itself around you, and holds you tight, keeping you warm when life gets cold. There is nothing quite like seeing it performed in person. The subtle breaks in the poet’s voice, tears peeking out the corners of their eyes, small shakes when reading about something particularly heavy, self-deprecating jokes, and the fire that radiates from deep within that warms the room. All of these things tie the audience to the performer, letting you know that you can face the world because there will always be poetry and the rooms it’s performed in. As summer rolls in and the temperature rises, here are some of the best places you can catch live poetry and feel the warmth within. 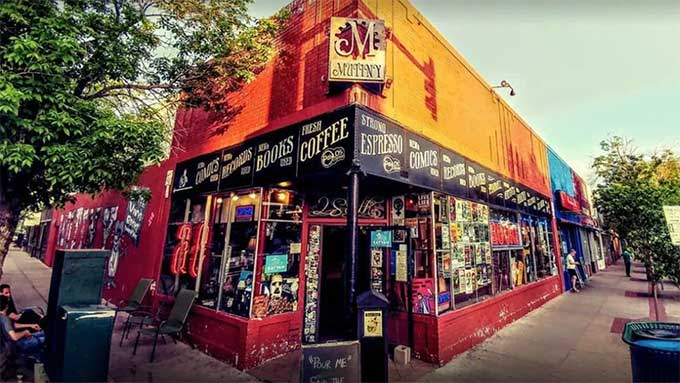 Mutiny Information Cafe feels like it came from some other era—the kind of place that doesn’t exist anymore, a punk rock monolith where everyone is welcome so long as you’re not an asshole. It is simultaneously a coffee shop, a comic store, a record store, a new and used bookstore, and a venue. On the second Wednesday of every month, it is home to Punketry, hosted by South Broadway Press featuring the band Black Market Translation. The band plays improvisational punk music while poets recite their work. While this can be jarring, that is the point as poet and musician work toward a kind of symbiosis. It’s a beautiful thing once achieved as the passion of the band combines with that of the poet and rises like fire, filling the room and the hearts of those within with hope, resolve, and a whole lot of attitude. 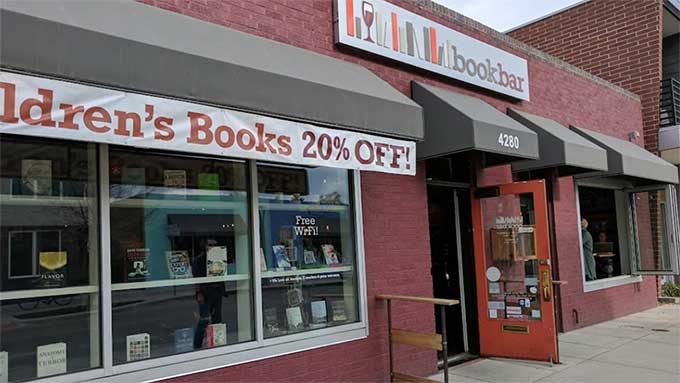 BookBar is exactly what it sounds like: a bookstore that doubles as a wine bar. While it is relatively new on the scene, it has grown to be quite the popular destination due to its concept as well as its dedication to integrity and sustainability. In addition to having a wide variety of genres to choose from, BookBar also hosts poetry readings, book clubs, storytimes, happy hours, and is working to put its own slam together. 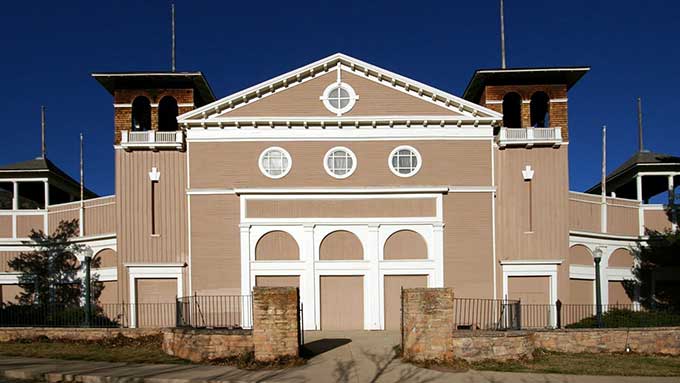 The historic Chautauqua Auditorium lies at the base of the Flatirons. Originally built in 1898, it has evolved with the times and now hosts a summer concert series on behalf of Z2 Entertainment, which features mostly musicians but will also feature Andrea Gibson, one of the most renowned performance poets working today. She’ll be accompanied by Zoë Keating, a cellist known for her innovation and sonically delving into human emotion by melding acoustic performances with technology through live looping. 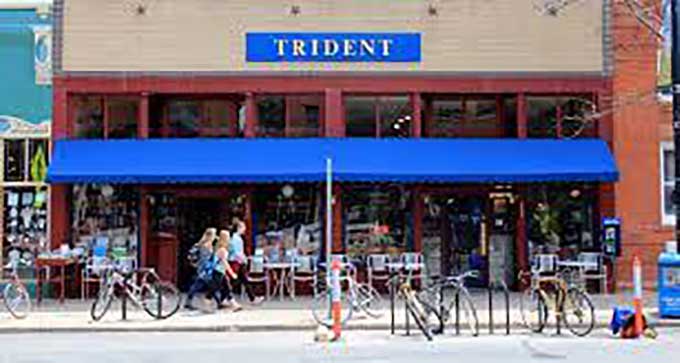 Opened in 1980, Trident is an employee-owned bookstore located in downtown Boulder. By day, it serves as a bookstore, coffee shop, tea shop, and art exhibit. When night falls, magic descends upon it. It hosts a different event almost every night. These include performance poetry, book readings, music ranging from jazz to punk to indie, comedy, language exchange nights, film series, and a writing circle with rotating themes. 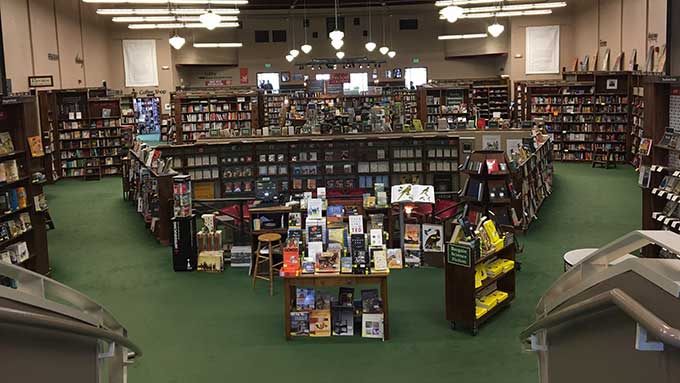 Tattered Cover on Colfax Ave. can be overwhelming due to its sheer size. The place is huge and filled to the brim with every kind of book imaginable. It’s the kind of place a book enthusiast can get lost if they’re not careful. Established in 1971 and boasting seven locations, Tattered Cover is the largest indie bookstore chain in Colorado. It is renowned for holding steadfast to its core values and hosts many conversations between intellectuals, author meet-and-greets, and poetry readings from some of the best working today. 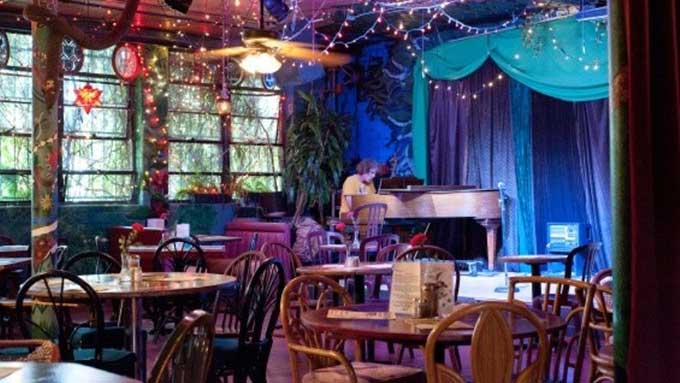 Mercury Cafe feels like a secret, a myth, a place that exists outside of space and time. Surrounded by plants and covered in art and lights, it sits in the heart of Denver like an oasis, as if it were ripped from some story and placed at its California St. location, where it has stood since 1990. In the 32 years that have passed, Mercury’s legend has grown, largely due to Denverites spreading the word about its 100% organic food, ballroom dance classes, wide variety of events, and its atmosphere. It’s a haven for political action groups, musicians, artists, and, of course, poets. Every Sunday at 8 p.m., it hosts Poetry Slam (RESPONSE!), which features poets both long-established and up-and-coming. The slam is followed by an open mic for those just starting out, more seasoned folks who wish to try out new material (new shit!), and/or those who want to bare their souls in front of other people. 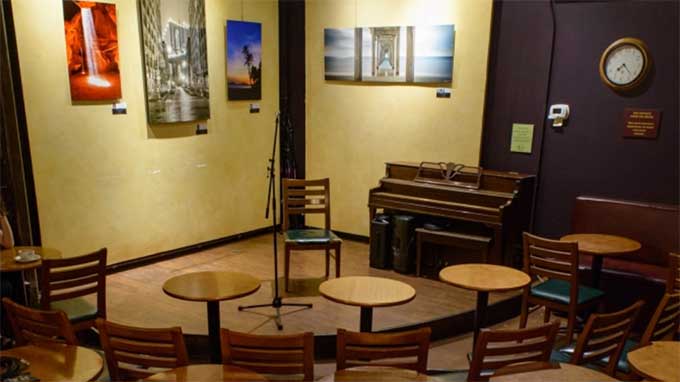 Boulder’s Laughing Goat can be found on the more peaceful East End of Pearl St. It’s the perfect location as this is a place for quiet coffees, slow sips of beer, the hum of keyboards tapping in unison. It also has a stage. On the third Wednesday of the month, it becomes host to Jazzetry. Similar to Mutiny’s Punketry, it features an improvisational jazz band playing while a poet recites over the music. This is a more chill affair, however—still just as passionate but in a much less blood-boiling kind of way. 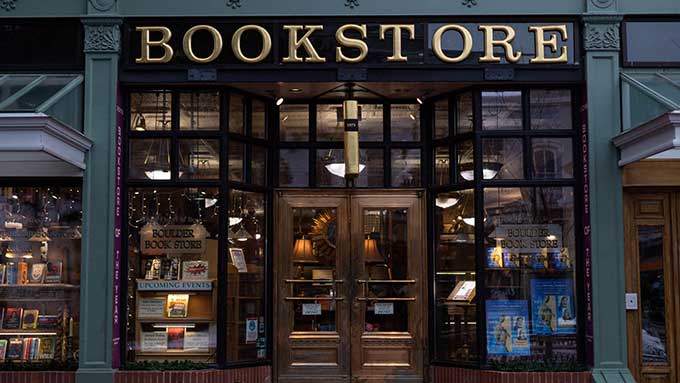 Boulder Bookstore is a town staple. Since 1973, it’s been ingrained in the town’s fiber, a proud and important part of the community. In addition to simply being a great bookstore with three floors and a massive selection, it supports educators by offering discounts on school materials, educational texts, and much more, and that’s just by day. At night, the third floor becomes a place to gather and listen to the words of some of the greatest writers of our time. It has been graced by the likes of Joyce Carol Oates, Gloria Steinem, and Neil Gaiman, among many others. The store hosts 200 author appearances a year and has earned the accolades it has achieved over the years.