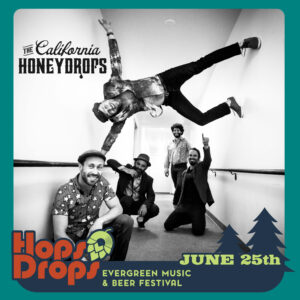 Just us in Buchanan Park – 32003 Ellingwood Trail – Evergreen, CO 80439 from 12:00 pm – 9:00 pm MT for a never-seen-before experience. Rooted in Evergreen’s long history of supporting the arts, Hops Drops is a non-profit organization and 10% of its proceeds will benefit the Rocky Mountain Academy of Evergreen. Hops Drops was previously known as Evergreen Music Festival, which celebrated its first year in 1966. The festival started with the intent to bring classical music to the mountains and thirty-two years later, Logan and Riley Boone, along with Maruc Durante, Bobby Everett, and Colin Kerr have joined forces to create a refreshed and modernized look for the Colorado music & entertainment scene. General Admission + Beer Tasting tickets are now on sale for $55 at Hops Drops Tickets.

All ticket options include:

–  Entry into the festival

– Entry into the festival

-Entry into the festival + Beer Fest

-A photo booth and gifts from our partners