World War II Symposium – At The Broomfield Auditorium – July 16: Honoring Those Who Served, Passed, And Changed The Course Of U.S. History

Broomfield, CO – On Saturday, July 16, from 10 a.m. – 12 p.m., the Broomfield Veterans Museum will be hosting a free World War II Symposium at the Broomfield Auditorium; the event meant to honor Colorado’s veterans, and dive deep into the heritage, and visceral meaning of World War II.—The morning inside and out of the 6,800 Square foot auditorium will be jam-packed with people, some of which will be wearing World War II-era green uniforms fit with M1 Garands and green steel helmets: 1940-style military vehicles will be rolling in outside holding armaments and all the essential things folks used during World War II—everyone filled with great joy to commemorate this incredible scene. Meanwhile, there will be a multitude of historians and well know authors to attend: including Flint Whitlock, Gail Beaton, and David Barrett.  Some of the scheduled keynote speakers consist of Guyleen Castriotta, Mayor of Broomfield, and the United States Representative of Congress, Joe Neguse. Followed by a very special performance by “Rosie The Riveter” and “Mrs. Mamie Eisenhower” (women in World War II). 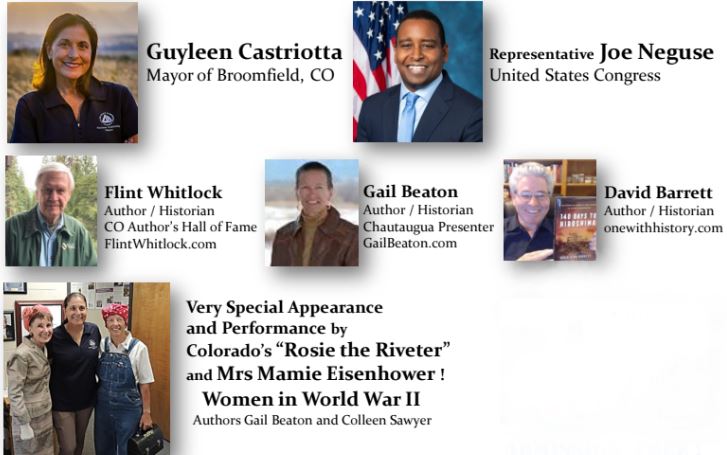 For any additional information about this event please reach out to Fred Martin—Direct: 303 548 7248—www.FredTMartin.com