The STYLE Issue: Fabulous: A Look Into the Colorado Drag Scene 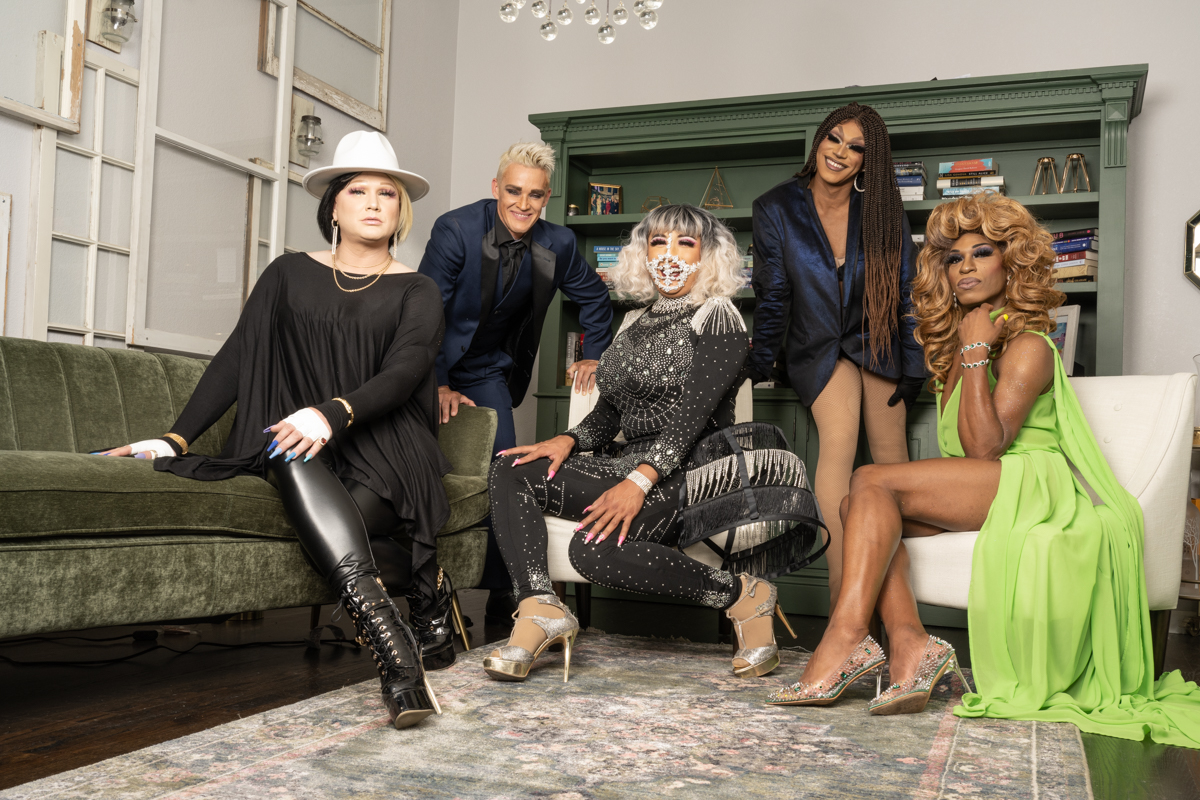 For Yellow Scene’s Style issue, we are highlighting drag and the glamor and beauty that is inherent in the art form. First, we must talk about the nature of beauty.

There are so many beautiful things in this world. A cool breeze on a hot day. Barefeet moving through gentle grass. The sun setting behind the mountains and turning the world gold for just a moment. The first brush of a new lover’s hair against your neck. Your favorite song. Late nights with those who know you best. Love. There are so many beautiful things all around us all the time we sometimes forget to find beauty within ourselves. But it is there in each of us. It radiates out through our smiles, dances through streets in our laughter, falls slowly to the ground with our tears. It is who we are in our hearts, the very fiber of our beings. What we care about. What makes us laugh and cry, and what pisses us off. It is our identity. This inner beauty is what drag celebrates. It is an attempt to pull beauty from within and wrap it around the exterior, to wear it proudly like fabulous armor.

I got to see the donning of this armor firsthand at YS’ photoshoot, which was held at a gorgeous home in Erie, Colorado. We worked with four queens—Kendra D. Crase, Khloe Katz, Miss Zarah Misdemeanor, and Anyah Dixx—and one king, Trey Suits. As they each arrived and dressed and the White Claw flowed and laughter and music filled the rooms and before any photos were taken, I noticed a confidence shared between each of them, an enviable self-assuredness that many spend their lives seeking. It was one of the most comfortable and accepting environments I’ve been in, and it prompted thoughts about purity of self, standing true to who you are no matter what, and knowing that you deserve love and acceptance. 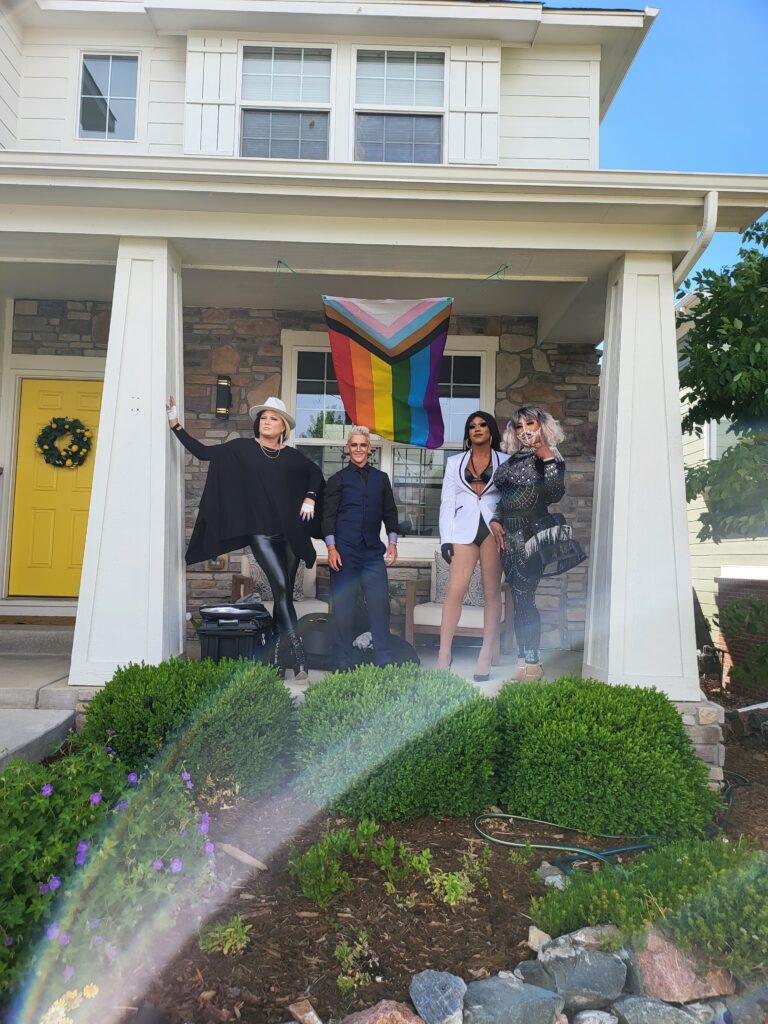 It also made me think about the importance of community. The shoot came out incredibly well and that is only because of the combined efforts of a lot of hardworking, caring, badass people who came together to make something beautiful. It felt like a big group hug and made me realize that no matter where you are in life, who you are, you are not alone. There is a place for you somewhere. There are open arms out there in this world just waiting for you to run into. Before, during, and after the shoot, each person talked to me about these concepts, as well as the nature of drag, and—because this is the Style issue—beauty advice for those just starting their drag journeys. 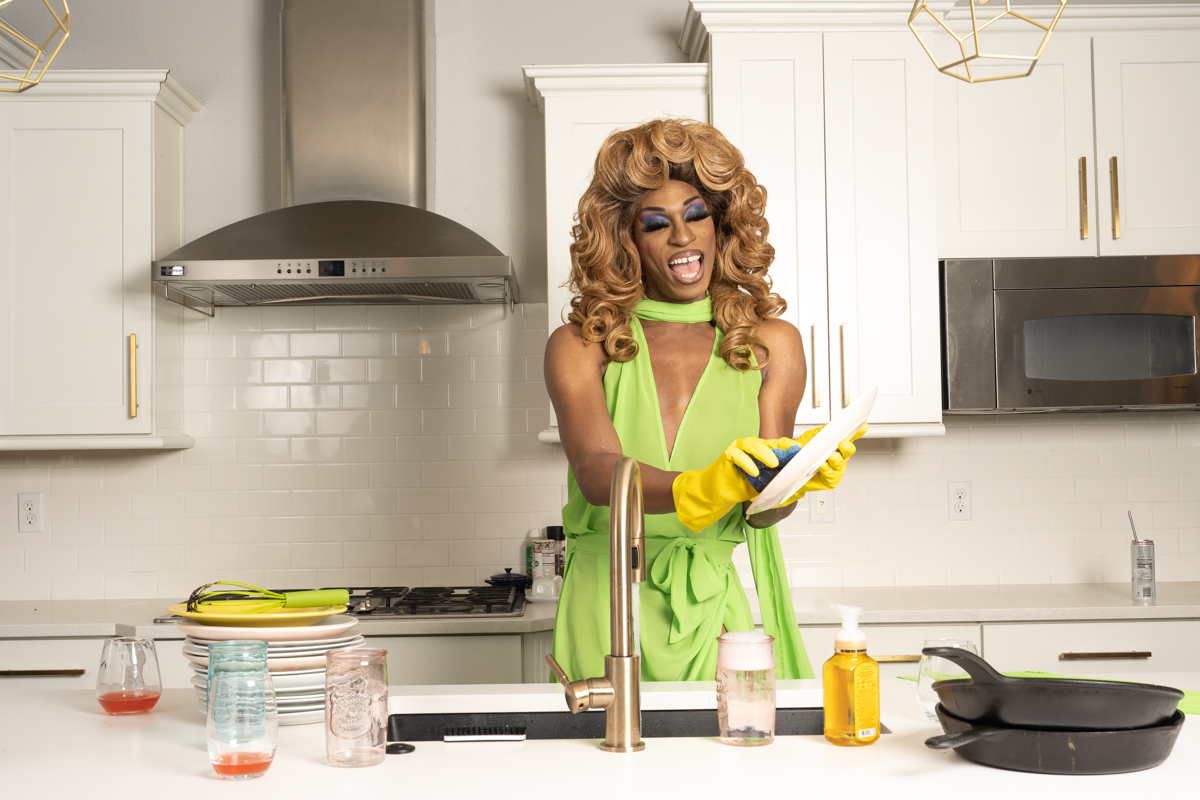 Each person we worked with is a performer through and through. Every single one of them told me about being drawn to the stage from a young age. Before drag, this manifested in the form of school plays, musical theater, open mics, and the like. Since they’ve been doing drag, they have all created carefully crafted performances that have made each of them quite popular in the Colorado drag scene. 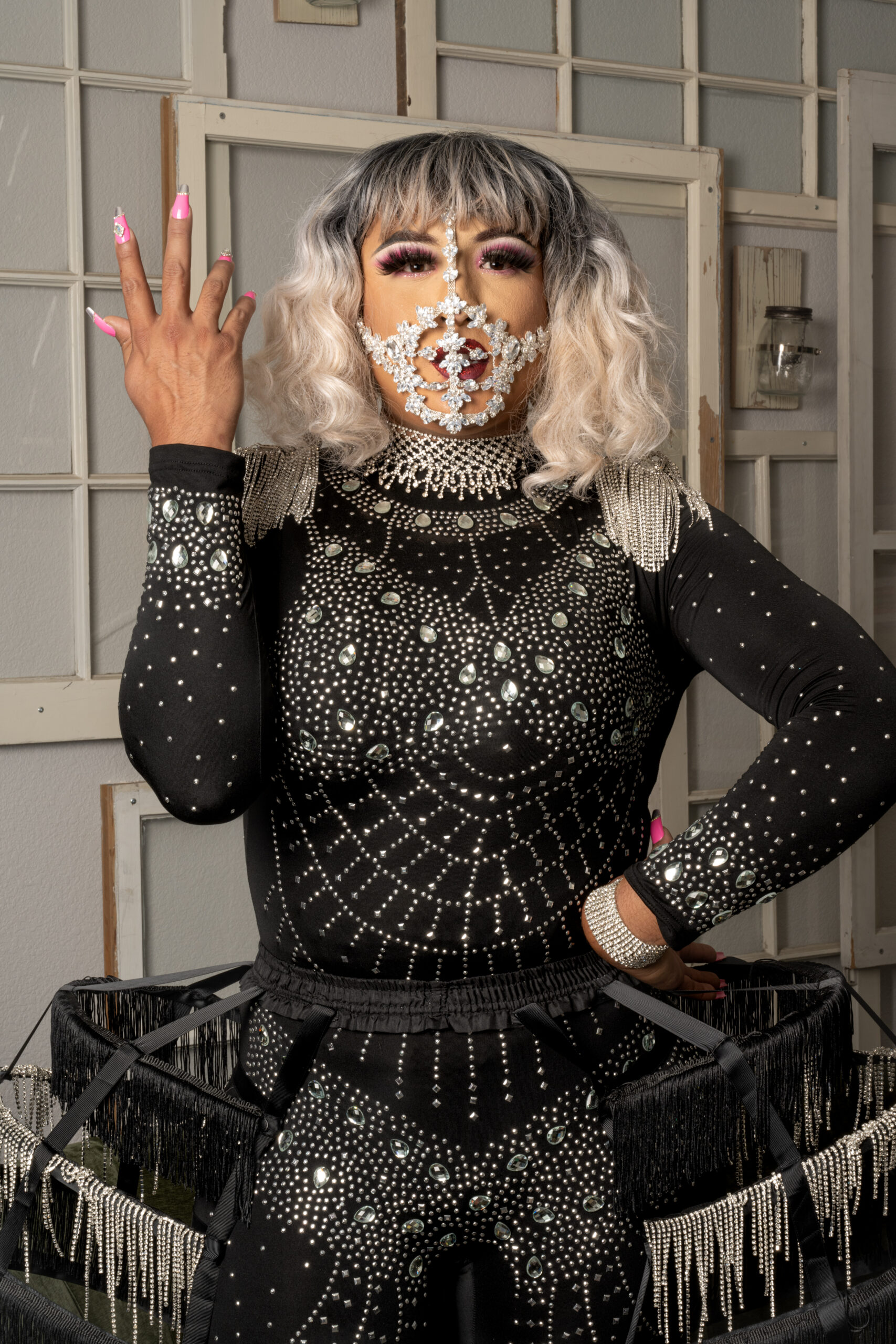 For Anyah Dixx, it’s about joy and sharing the music and humor that she loves. She told me, “It’s about seeing people happy, man. The world is so turbulent right now. The world needs a little bit of joy. That’s what brings me my joy, to then continue giving more joy.” 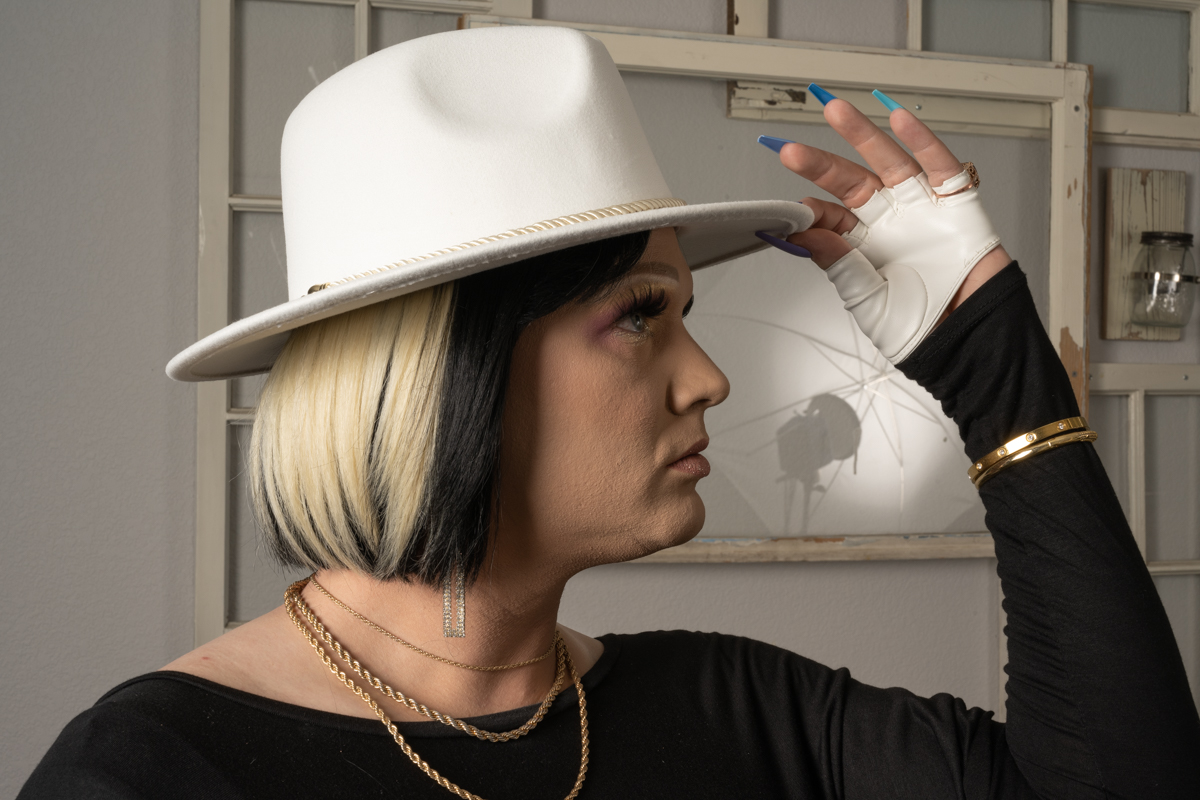 Khloe Katz, a self-described “control freak,” produces every aspect of her shows. With a background in debate, she told me she was “blessed with some skills on a microphone,” melding music and improvisational comedy into each of her performances resulting in no two shows ever being exactly the same. 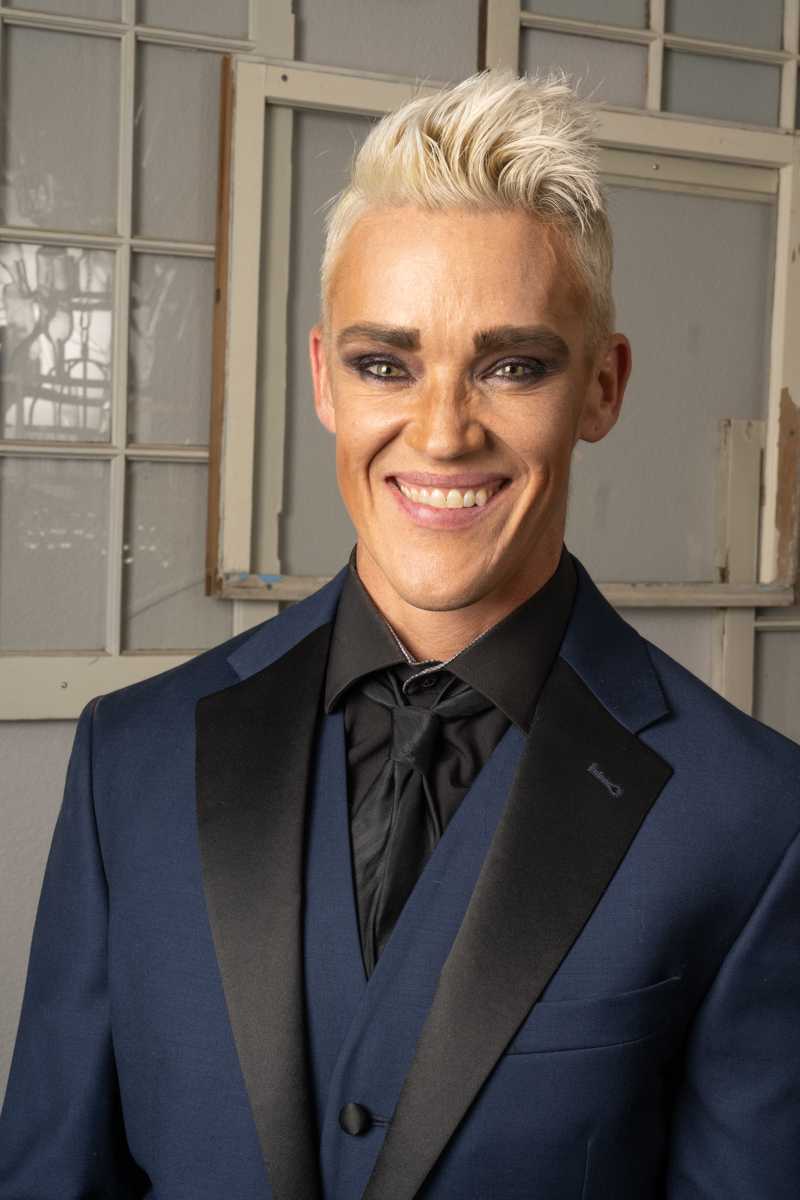 Trey Suits hits the stage with an unbelievable amount of swagger and easy confidence. He describes his performance style as “high energy storytelling,” rooted in authenticity, performing lip-synced covers of some of his favorite songs and also has a YouTube channel that mixes his striking style with elaborate face paint. 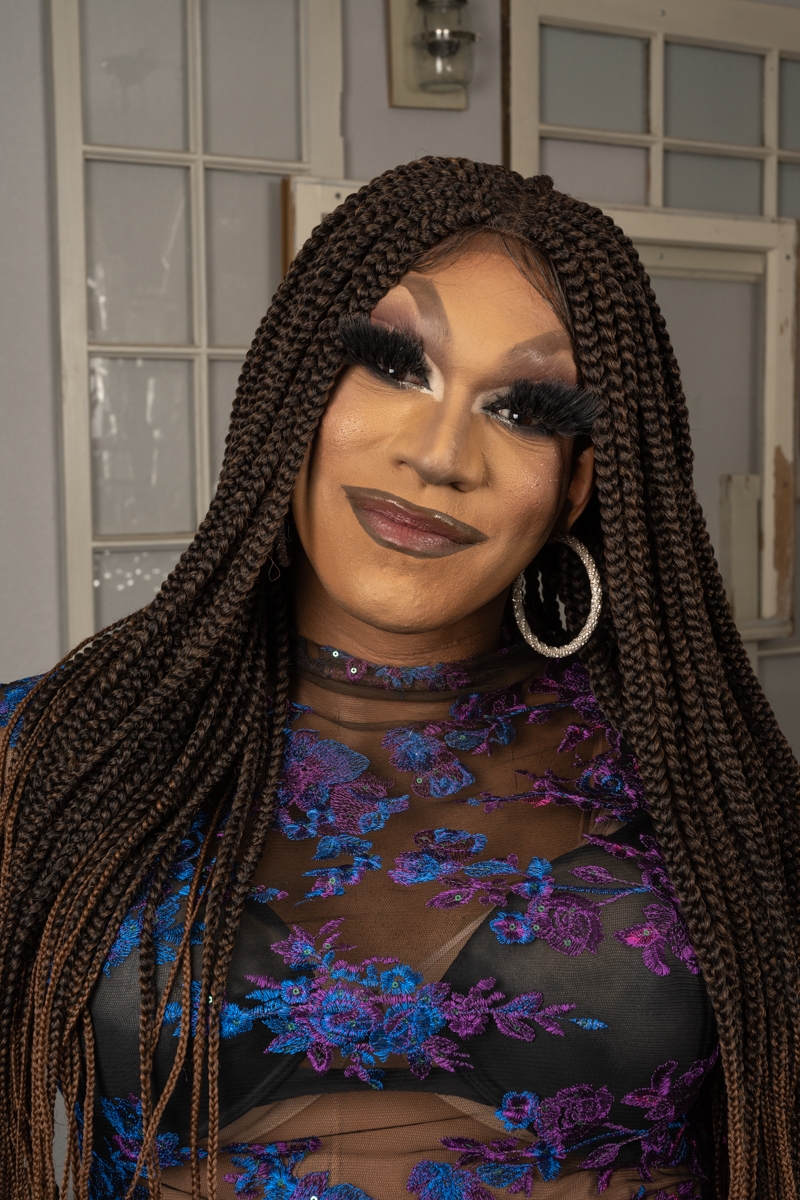 Kendra D. Crase’s shows come from her “idea of what a strong woman of color would be, someone who knows where they stand, and is the biggest thing in the room.” She places a lot of emphasis on crowd interaction and creating a sense of community. She said, “I like community. I love to do twerk-offs at my shows. I mix a little comedy with my emceeing and interacting with the crowd.” 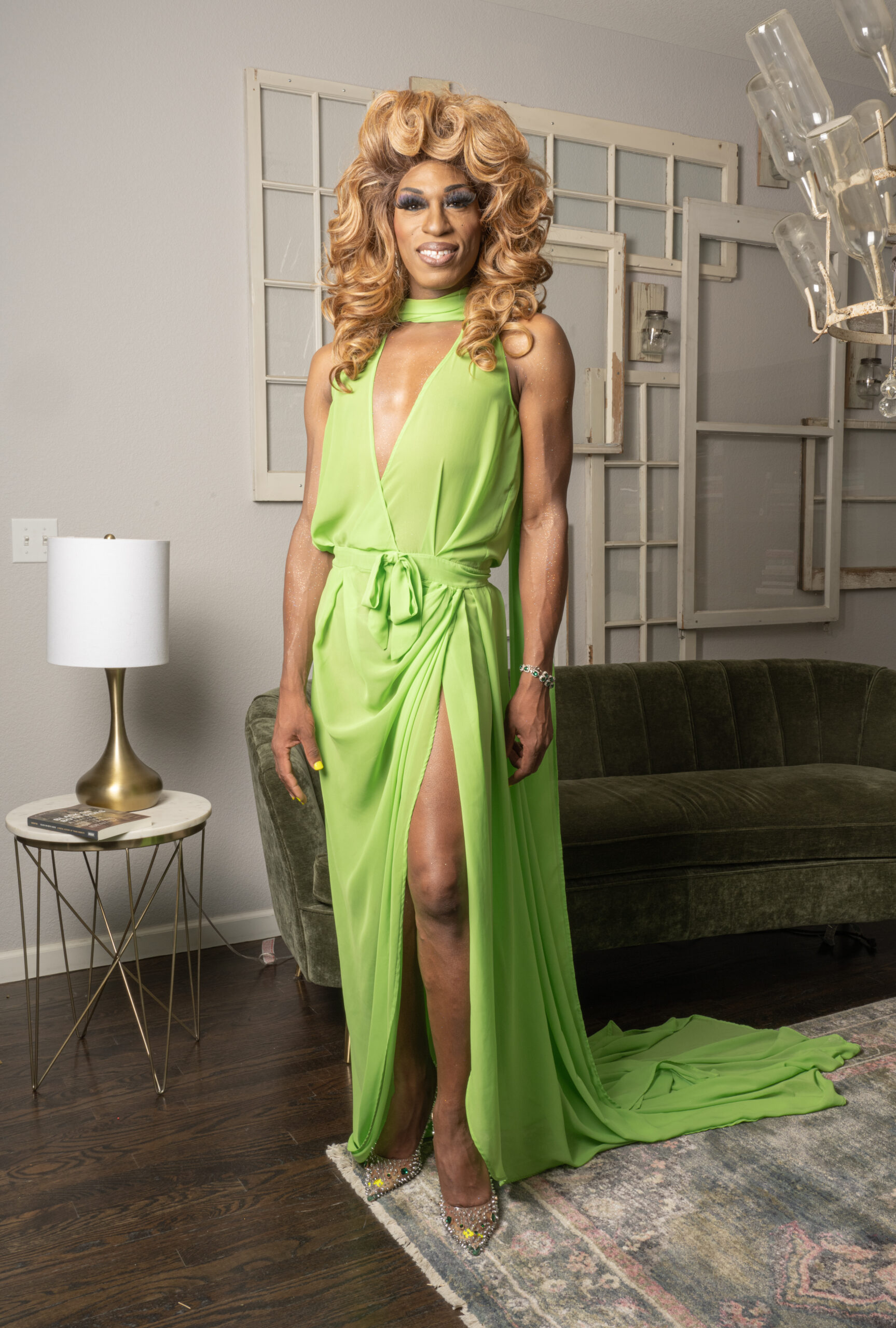 Miss Zarah Misdemeanor seeks to do more than entertain in her performances. She told me, “Yes, it’s about performance. It’s about entertainment. But it’s about community work. Being a community leader. I feel like doing drag is a great way for me to reach my community. When I first got started, I thought it was just going to be entertainment purposes only. But as I really dived into it and started doing it more and more, I realized how I’m a community leader because of drag. So I tried to use it as a platform to really help and serve my community. It was about helping to raise money for you know, friends that were sick, that were dying with the AIDS epidemic, and stuff like that.” 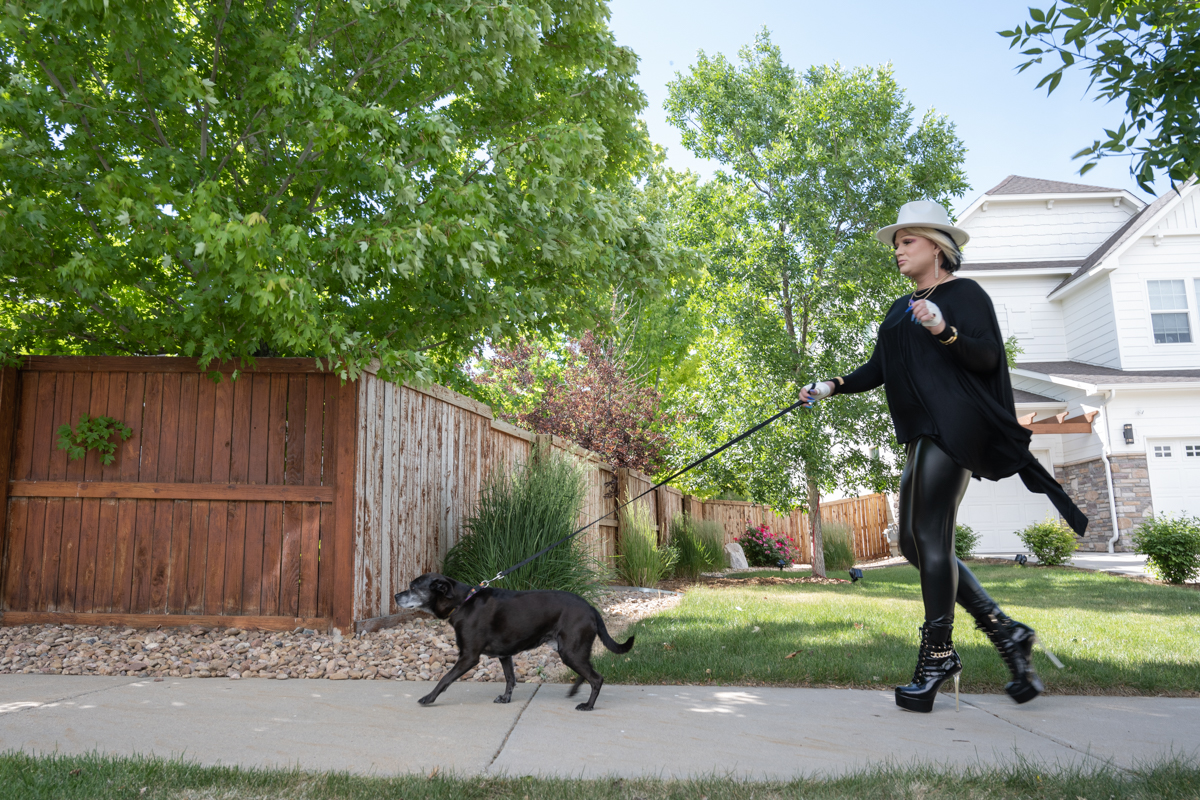 During the shoot, we got to talking about what drag means to society as a whole. Drag is a statement, an art form that uses the body as a canvas and the best art should make you confront your biases and assumptions, change your way of thinking. Khloe Katz said, “You have to do the thing that’s uncomfortable to recondition and rewire all of your biases, all your conditioning, to what we’re taught of what’s normal.”

Kendra D. Crase elaborated on this, saying, “No queer person is trying to make anyone uncomfortable. Queer people are just trying to live their authentic selves. They want to wear bright pink that day. That’s what they want to wear. If you walk in and you’re like, ‘Why are you wearing that?’ That’s weird. It’s weird to you. So why wouldn’t you say what made you wear that color today? It’s about changing the conversation.”

This idea of being true to yourself and taking care of yourself was a recurring theme in our conversations. There exists an undeniable duality within each of these performers. There is the larger-than-life personality, shining in the stage lights, and there is the person beneath, the one who goes home and rubs their feet and washes the makeup off. Each performer stressed the importance of not losing that person in favor of the glamor and the excitement. When asked what the biggest piece of advice she’d give to a younger drag performer or someone just starting out in drag, Miss Zarah Misdemeanor told me, “I would tell folks not to lose themselves. I think it’s really easy for drag entertainers to lose who they are through this drag persona. Without the person I am out of drag, there would be no Zarah. I take care of myself in all aspects and don’t get lost in this character and persona that I’ve created.” 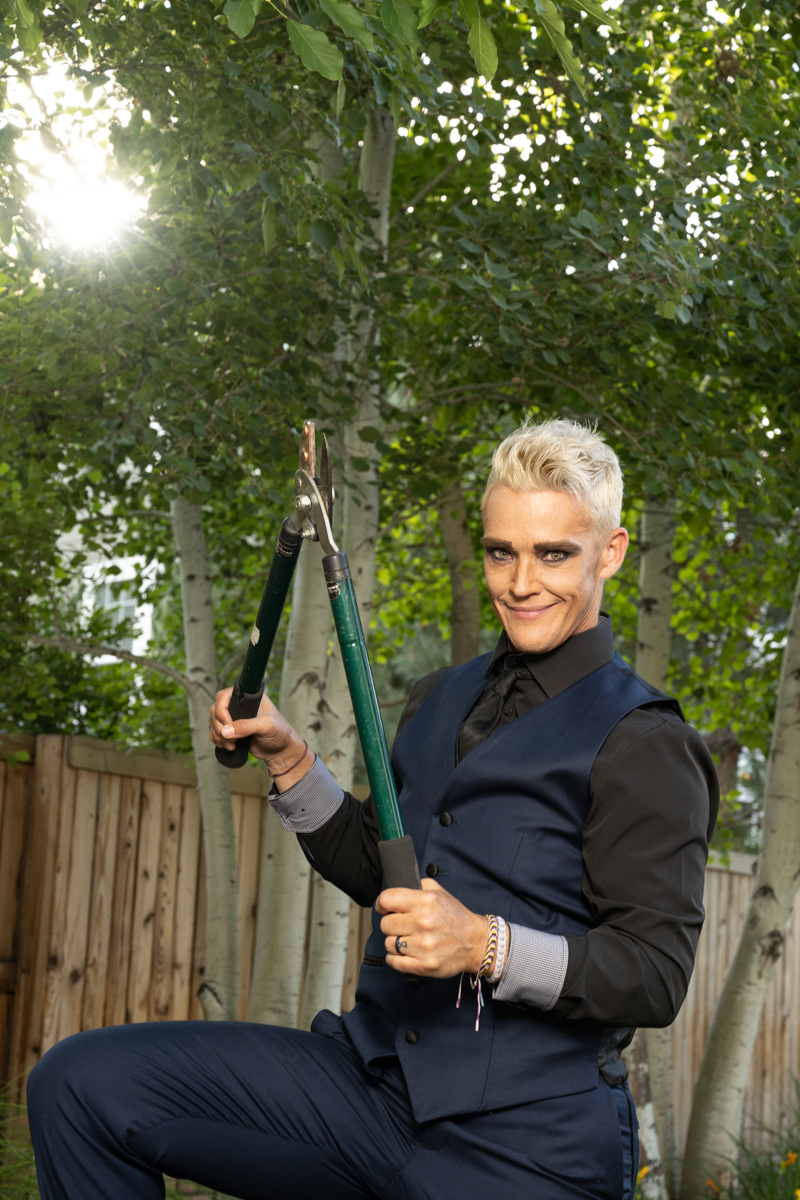 For Trey Suits, drag has been an especially important part of helping them define their identity. They told me, “Trey was always an extension of myself that I didn’t allow to come out in my life. When I first started performing drag, I realized I ended up creating safe space for myself on stage. It was the only place that I could really just let out whatever was happening inside of me when I didn’t even understand it. Trey was like, ‘Hey, I’m gonna, I’m going to hold your hand until you can figure this out.’” 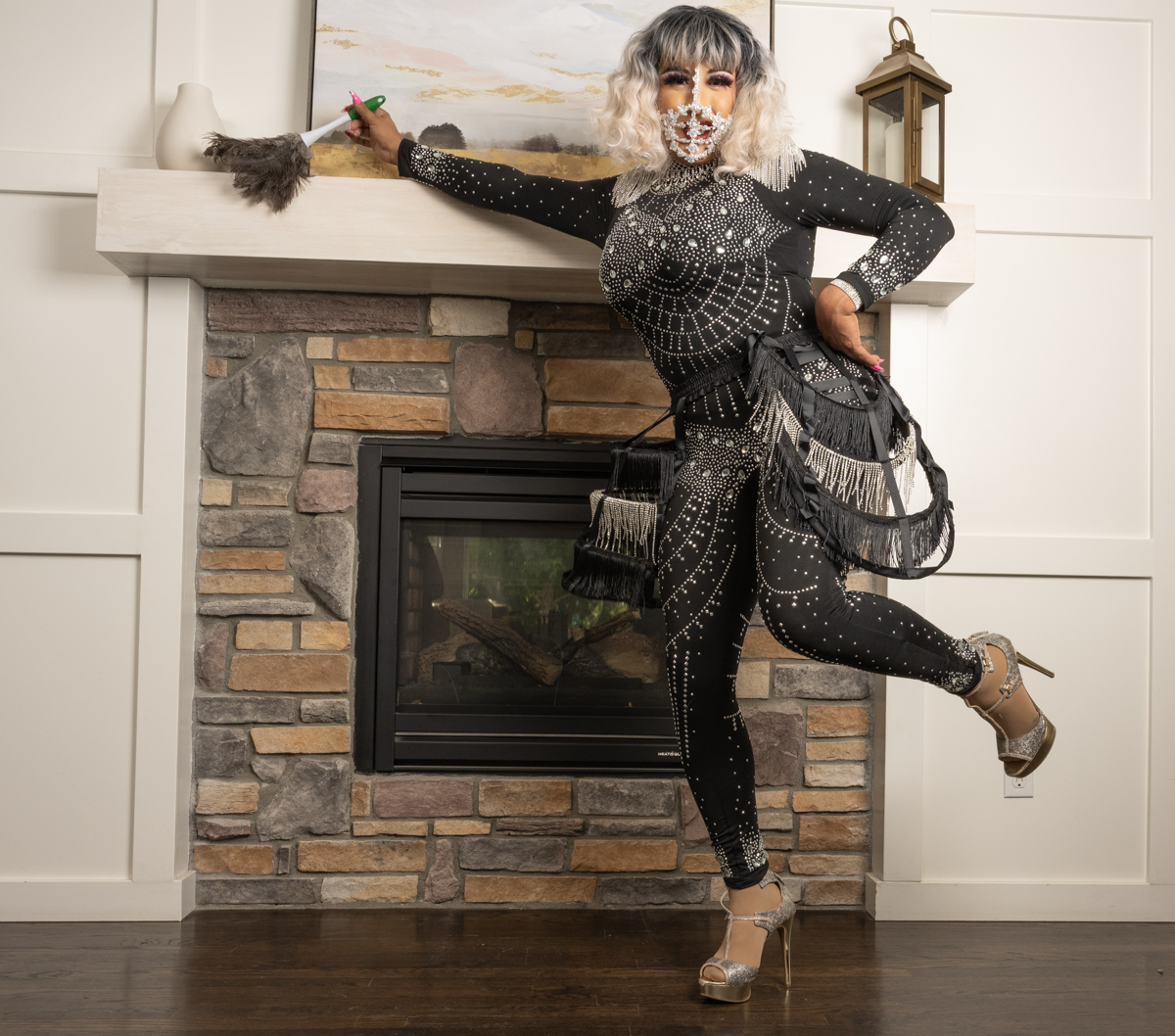 Anyah Dixx also spoke to the importance of drag in regard to confirming identity and also creating very visible safe spaces where people can be their authentic selves, something which then allows people to know that they are not alone and that there is a place for them in the world where they will be truly accepted. She told me, “A lot of people are just too scared of themselves or too scared of the world around them to be 100% them. So just the fact that we have these areas, it’s just fantastic.”

In addition to insights about the nature of drag and the importance of identity, each performer shared their beauty advice. Each of them mentioned the “canvas” at some point. This term refers to their skin and how important it is to take care of it. Anyah Dixx said, “Be nice to your skin. This is a very, very traumatizing thing for your skin if you’re not doing it well and taking care of it afterwards. This whole message is to be nice and to love yourself. Part of that is about loving your skin.” Kendra D. Crase echoed this, saying, “It’s only gonna look as good as your skin does.”

Something people unfamiliar with drag might not understand is the sheer amount of time, thought, and effort it takes to get into drag. Khloe Katz said, “A lot of women at shows ask, ‘Oh my God, can you do my makeup?’ I’m like, do you want to sit in a chair for two hours and put on massive amounts of makeup? No, you probably don’t.” She went on to say, “Our job is to make the illusion happen. And then make it exaggerated because you’re going to be on stage, the person in the back of the bar or the back of the theater needs to be able to see your features enough to believe it. Then also it’s got to be beautiful.” 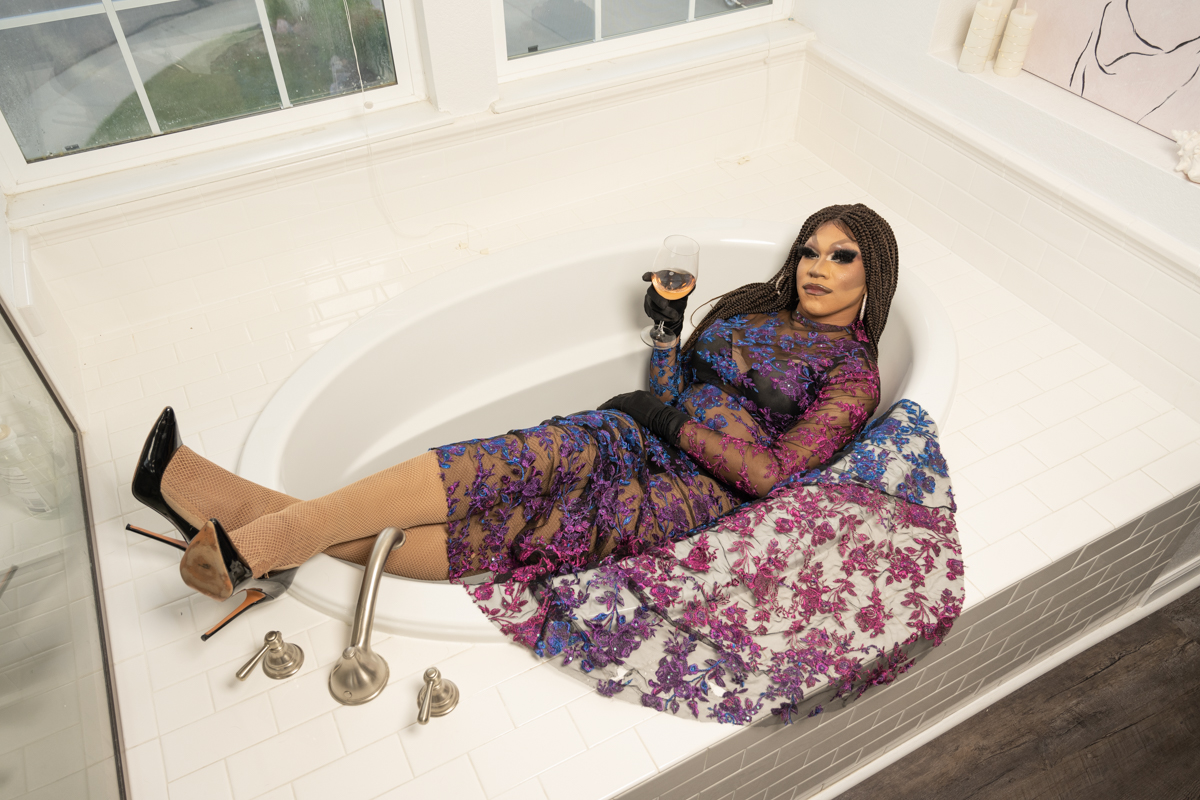 As for final messages, each of these incredible, passionate, kind, royal individuals left me with something poignant and thought-provoking. Anyah Dixx said, “For anybody that has a preconception of stepping into your own self, whether you’re gay or whatnot, step forward with courage. It’s a whole new world. People are different now and as many terrible people that are out there, there are some amazing people along that journey as well, to just have courage.”

Khloe Katz told me, “I just think right now, the LGBTQIA+ community is a little bit under attack. There is a little bit of division from the GOP or right-leaning people. I just think it’s really important, more than ever, that representation and visibility matters across all spectrums and diversity, because somebody is a part of our community.”

Miss Zarah Misdemeanor said, “Just be true and love yourself. If you can do that, then you’ll be respectful to other people, but definitely that self-love. I’m all about that stuff. I feel like if we learn to love ourselves, it’s just that much easier to love other people.”

Kendra D. Crase kept it short, “Find happiness from within.” Finally, Trey Suits left me with this: “The process of living is coming home, coming back to yourself.”