By Sara Gregory | The Post and Courier (via AP Storyshare)

The kids are not alright.

Even before the pandemic began, more than 1 in 3 high school students reported persistent feelings of sadness or hopelessness. In many communities, those numbers have skyrocketed. But in some places, educators and others are experimenting with new ways to address students’ mental health needs — or reinvent old strategies. In this reporting collaborative, the Education Labs at AL.com, The Dallas Morning News, The Fresno Bee, The Post and Courier and The Seattle Times partnered with The Christian Science Monitor, The Hechinger Report and Solutions Journalism Network to produce this series of solutions-oriented stories.

Christina Cody has a tireless, we-can-make-it-work attitude.
No matter the problem, she’s the kind of person who will offer up ideas one after another until she finds one that works.

Cody is a health and wellness specialist for Cherokee County Schools, a small, rural school district in the northwestern part of South Carolina. Over the past few years, she has been confronted with the growing youth mental health crisis at every turn. The reports from her colleagues filled her with worry. They would despair week after week as more students threatened to hurt themselves or others.

Some students were stabbing themselves with pencils or scissors. Others tore apart pencil sharpeners to get the blades and cut themselves. When the last school year started, there were seven mental health therapist positions to serve the district’s 8,000 students. None were filled. Without them, educators did the best they could to help in a job they weren’t trained to do.

Students’ mental health needs were increasing well before the COVID-19 pandemic began. The needs have only grown since. More than a third of high school students nationally experienced poor mental health during the pandemic, with half feeling persistently sad or hopeless, according to a Centers for Disease Control Disease Control and Prevention study. In South Carolina, children’s emergency room visits for mental health needs are up nearly a third since March 2020, state officials have said. Suicide attempts also increased, particularly among teenage girls.

Cody, ever the problem solver, started thinking of ways to fill the vacant positions.

South Carolina schools were some of the first in the nation to put mental health therapists in schools. More than two decades later, they’re seen as critical positions — but less than half of all schools in the state have one. The jobs start at $36,000 and require a master’s degree. The persistently low pay makes these positions hard to fill in both urban and rural areas like Cherokee.

The struggles in South Carolina mirror a national problem: Over half of schools surveyed by the U.S. Department of Education report having inadequate access to licensed mental health providers.

Over the next few years, state officials want to dramatically increase the number of school therapists. Paying more is part of the plan — starting salaries could nearly double. But one of their suggestions is to do exactly what Cody ended up pushing for: Turn to private providers.

In the right place

Cody has spent almost her whole life in this rural area. As a teenager, she couldn’t wait to get out. She went to college three hours away in Charleston and might have stayed there for good except her high school sweetheart got a job back home. Cody followed and took a job teaching in the district.

She feels like she ended up in the right place. She finds her work both fulfilling and varied, ranging recently from driving meals to students during the pandemic to serving as a friendly ear. 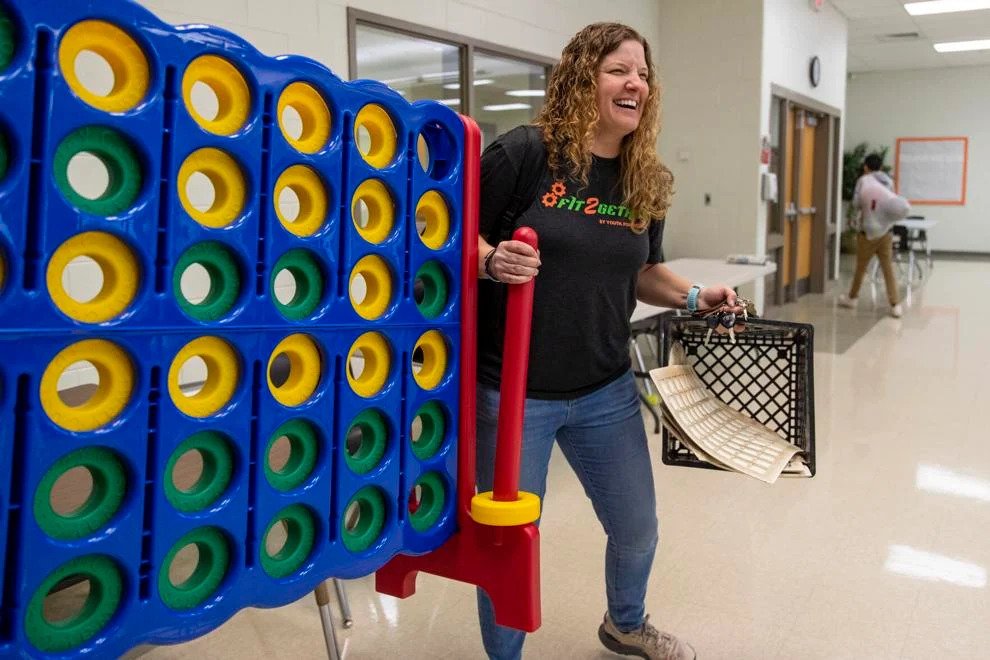 Christina Cody, a health and wellness specialist for Cherokee County schools, brings out the giant Connect Four game at Copeland Academy, an alternative middle and high school in Gaffney, on Friday, May 13, 2022. Andrew J. Whitaker/Staff. awhitaker@postandcourier.com

She is most animated when she’s in front of a classroom or talking with students. Her face lights up when they get excited, and she grins and nods in agreement. She talks with them, not to them.
For nearly a decade she taught biology at Gaffney High, where she tried to make her lessons relevant to students. She paid close attention to topics that excited them. One day she found herself in the middle of an animated discussion between students about health outcomes.

On every measure, there were broad disparities. She recalled one student asking, “So you mean to tell me that because I’m Black, I can’t be as healthy as a White person?”

“Everybody felt the weight of that comment,” she said.

They talked about how the problems were systemic and her students kept saying they needed to do something to fix that. The conversation stuck with her. She felt a gnawing sense of urgency to do more to address the physical and mental health issues she saw her students and their families struggling with daily. Cody left the classroom in 2014, but stayed with the district and moved into the job she has now focused on student health and wellness.

Her work looks a little different from school to school because she has made a point to listen to and elevate students’ ideas and solutions. At one school, they told her they needed more equipment for recess. At another, students asked for healthier snacks. Cody works to find grants to do each of the projects.

She focused more on physical health at the start. But mental health has become a bigger priority over the years. The only positive she sees is that people have become more comfortable talking about mental health. Before the pandemic hit, there was a lot of stigma attached to it.

That’s changing. When she brought together a group of 10 middle and high school students during the 2020-21 school year to talk about the problems facing teens, mental health was the top issue they flagged.

Students had lost classmates to suicide but still felt like many adults were scared to talk about it. Cortez Dawkins, a senior at Gaffney High, said it makes a lot of students feel like they have to deal with their mental health problems alone. Ellyson Tate, a freshman at the school, said students often feel like they have no one to turn to. Tate and a lot of her classmates often fly under the radar because they aren’t in immediate crisis.

Tate feels pressure to put on a happy face even when she doesn’t feel that way because she doesn’t want to disappoint people. She said adults “don’t ask how you are until you look depressed or sad.” But even when asked, she doesn’t always want to open up for fear of worrying someone. All that pretending takes a toll.
“It’s like I don’t know what’s the real me,” she said.

The group held a panel discussion to raise awareness that was broadcast live at each of the district’s middle and high schools in spring 2021. Afterwards, teachers and parents told Cody it was the first time they realized the depth of what students were experiencing. They knew things were hard before the pandemic and they saw how life had gotten harder, but they hadn’t grasped exactly how bad the situation was. They hadn’t realized how many students were teetering on the edge, not in crisis, but not doing well, either.

As concerned as the adults were, many believed the needs would lessen once students returned to a more normal schedule. They didn’t anticipate the delta and omicron COVID variants would disrupt schools once again.

They also didn’t predict that all seven mental health therapist jobs in the district would be vacant last August.

They were in for a rude awakening.

They are in pain

Before the pandemic, the entire district might have one student make a threat to harm themselves or others each week.

Far more Cherokee students were diagnosed with depression or anxiety during the last school year than usual, Westmoreland said. They also saw it diagnosed more in younger students.

But at the same time, schools saw greater needs, they faced their greatest struggle filling positions to help students. Cherokee County has historically worked with the state Department of Mental Health, which fills the majority of school therapist positions around South Carolina. Low pay has led to many vacancies.

That’s the case now in Cherokee. Before the pandemic, they had seven school therapists staffed by the mental health agency. None were filled last August, and only two were eventually filled by the agency over the course of the school year. Cherokee is in the same boat as a lot of schools nationwide, 56 percent of which reported in April that they didn’t have adequate access to licensed mental health providers.

School-based mental health therapists are seen as a particularly effective way of getting help to students who need professional support. Since children are already at school, parents don’t have to take off work to get them to appointments. They miss less class because the commute to a therapist’s office is only a walk down the hall.
In-school therapists can also help overcome the stigma of going to a mental health clinic, said Regan Stewart, the director of the Medical University of South Carolina’s telehealth mental health care program. Their school is a familiar place where students are comfortable.

Those benefits, however, rely on filling school-based counselor positions.

Westmoreland initially didn’t want outside vendors. She worried about using people she didn’t manage, but she became convinced they had no other option. 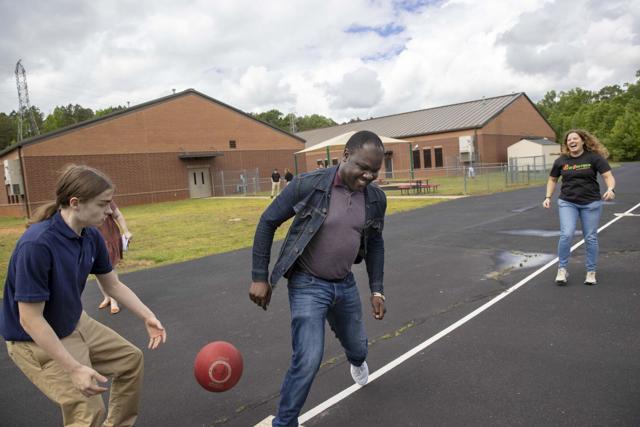 The first outside counselor was placed at Copeland Academy, the district’s alternative middle and high school. She is there four days a week. At the end of the school year, they added a counselor at Ewing Middle School once a week. That brought the total therapists in Cherokee up to four — still less than the district wanted or had before the pandemic, but better than zero.

Gavin Fisher, Ewing’s principal, was elated when he heard his school would be getting a therapist.

This was his first year at Ewing, but Fisher is a veteran educator and principal. Fisher has never seen a school year like this one. Middle school is a notoriously hard time for tweens and teens going through puberty, even absent a pandemic. He believes all 600 students at his school would benefit from seeing a therapist. Mental health needs have trumped every other need in the building. Focusing on academics has been impossible.

“None of that stuff matters to our kids when they’re hurting themselves,” he said. “They are in pain.”

Cody sees the private counselors as one piece of the puzzle. The district will keep trying to fill the positions it has always had. If they fill them, the contractors will be additional support. If positions remain vacant, the contractors can help fill in those gaps.

At Ewing, Fisher feels optimistic about the next school year. He is under no illusion that one counselor one day a week will fix everything. But they had to start somewhere, and one at a time is better than nothing.