Meet the Texas professor on the cutting edge of astrophysics 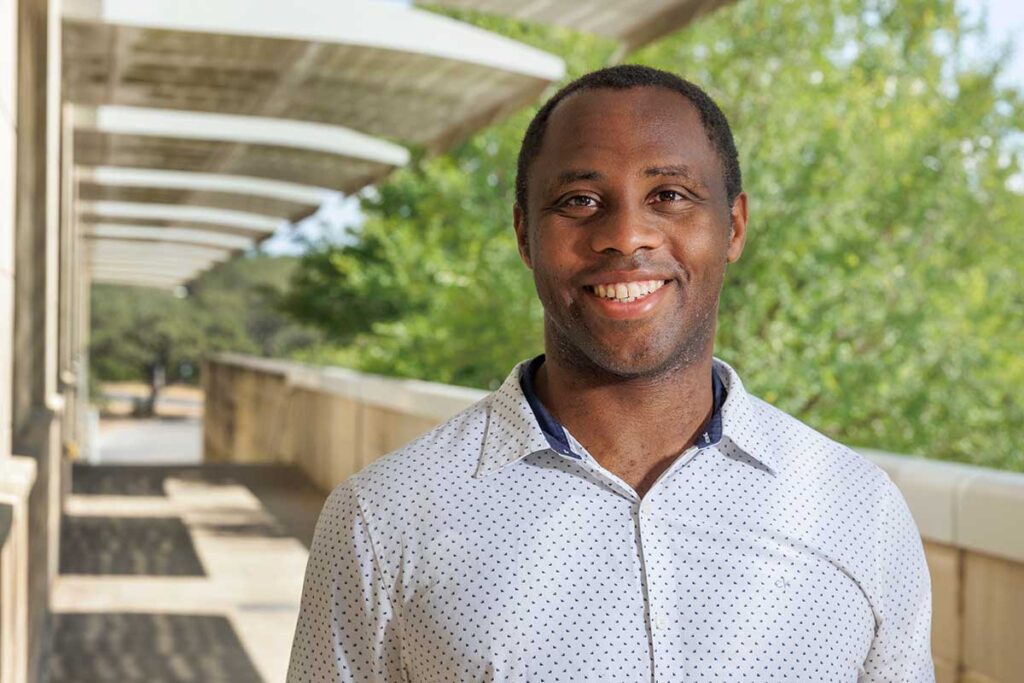 Richard Anantua is an assistant professor in the University of Texas at San Antonio’s Department of Physics and Astronomy. (Sam Owens/San Antonio Express-News)

SAN ANTONIO — Black holes are celestial bodies that suck everything around them into their depths like some sort of cosmic whirlpool.

They’ve also managed to attract Richard Anantua, 34, a New York City native and an assistant professor in the University of Texas at San Antonio’s College of Sciences.

One of the smallest known supermassive specimens, Sagittarius A*, or Sgr A*, is around 4 million times the mass of the sun and around 14.6 million miles in diameter. Still, so little is known about black holes that scientists aren’t even sure what their immediate environments contain.

The lack of information offers bountiful opportunities for discovery. In a milestone achievement, Anantua was on a team that recently made a major breakthrough: capturing the first image of Sgr A*, pronounced “sadge-ay-star.” It was published in May to international acclaim.

“It’s a very interesting and foundational, revolutionary time to actually be at the point where we’re taking the first of these images,” Anantua said, likening himself to an early Spanish explorer arriving in the Americas.

Some of Anantua’s findings were published along with the image of Sgr A* itself in May, half a decade after the initial data had been collected and five months after Anantua was hired by UTSA in January.

He first came to the university’s attention shortly before the pandemic began, but budget cuts imposed by Gov. Greg Abbott afterward forced the administration to delay extending an offer.

“We were really excited about him, not only because he was an excellent scientist, but (also because) he had real affinity (with) and real experience in working on student success issues, especially in communities of people who are traditionally underrepresented in the sciences,” said David Silva, dean of the UTSA College of Sciences and an astronomer himself.

Anantua is one of just 2 percent of astronomers and physicists who identified as Black in a 2012 survey by the American Institute of Physics.

“If we just look at astronomy and physics from a historical perspective, it’s been a very heavily European male-dominated enterprise for 150 years, if not longer, despite the fact that there were actually strong contributions to astronomy from other cultures over the last several thousand years all over the world,” Silva said.

The American Institute of Physics even appointed a national task force to investigate the root causes of African American underrepresentation in 2017. When the task force’s 186-page report was published in 2020, it suggested African American students studying for a bachelor’s degree in astronomy or physics faced significant systemic barriers to success, including a lack of departmental support.

While the odds were stacked against him, Anantua defied them.

Born to Haitian immigrants in 1988, Anantua, who was raised in the Brooklyn projects, has always been intellectually curious. He sought to tease out the inner workings of the natural world from an early age, often choosing to read encyclopedias or watch popular shows such as “Bill Nye the Science Guy” in his spare time. Even before reaching adolescence, he developed a particular fondness for physics.

With plentiful scholarships, Anantua was able to study the subject in college and graduate school. His CV reads like a who’s-who of the most prestigious institutions in the U.S.: New York’s Hunter College and Stuyvesant High Schools, Yale, Stanford, Harvard, Stanford again, U.C. Berkeley, the Flatiron Institute’s Center for Computational Astrophysics and the Harvard-Smithsonian Center for Astrophysics.

“The financial aid made it possible to take advantage of opportunities. I’m quite grateful for that fact,” he said. “There are very few instances where you could really come from a relatively impoverished background and then be regularly in the presence (of) and live in the same environment as some of the world’s experts or world-class scholars and great educators for four years.”

While serving as a postdoctoral fellow at Harvard-Smithsonian in 2020, Anantua became the first Black male member of the Event Horizon Telescope Collaboration, an international coalition of more than 300 researchers working to capture images of black holes. Hypothesized as far back as the 1700s, black holes exert such a strong gravitational pull that nothing, not even light, can escape them after crossing the event horizon — a boundary that marks the point of no return. While they remain mysterious in many respects, organizations such as the collaboration have begun to chip away at some of their innermost secrets.

Their efforts could help answer what is arguably the most pressing set of existential questions ever posed: How did our planet, our species, and, in turn, our humanity come to be?

“Fundamentally understanding the properties of supermassive black holes provides a new window into the formation and evolution of galaxies across cosmic time, which means over the last 10, 11 or 12 billion years,” Silva said.

Produced by data collected from a network of eight telescopes around the world in April 2017, the first image of a black hole was released, courtesy of the collaboration, in 2019. It depicted M87*, a black hole around 1,500 times more massive than Sgr A* named for the galaxy in which it resides, Messier 87.

To a casual observer, the image wouldn’t appear to depict anything especially noteworthy: a dark depression surrounded by a luminous orange ring of material. But to those in the know, it represented a pioneering feat with implications for the behavior of forces that influence life on Earth and far, far beyond it.

Most significantly, the image provided further evidence for Einstein’s general theory of relativity, which states that gravity results from the curvature of space and time. Developed over several years in the early 20th century, the theory has been a linchpin of physics since its publication in 1915, but it has recently been called into question.

Relying on a similar methodology, researchers in the collaboration eventually captured an image of Sgr A* as well. The black hole was of particular interest because it sits squarely in the middle of our own galaxy, the Milky Way. Located a mere (in cosmic terms) 26,000 light years from Earth, it is one of the few close enough that the flow of matter nearby is actually apparent, according to NASA.

While Sgr A* was smaller and dimmer than M87*, the resemblance as portrayed in the image was still striking: a depression surrounded by a luminous ring. However, Sgr A*’s ring, like M87*’s, wasn’t perfectly even all the way around. Some portions were darker or thinner than others. One of Anantua’s objectives was to explain why.

“Achieving the image is a technological triumph. But what does the image actually mean?” Silva said. “That actually requires very complex computation with very sophisticated theoretical foundations. And that’s what Richard does.”

Working with other researchers, Anantua helped show not only that the ring was brighter in portions where the gas pressure was higher than the magnetic pressure, but also that the activity of particles known as positrons influenced the orientation of the polarized light waves emitted. In so doing, he shed light on some of the factors that affect the external appearance of black holes, making a significant contribution to his field. 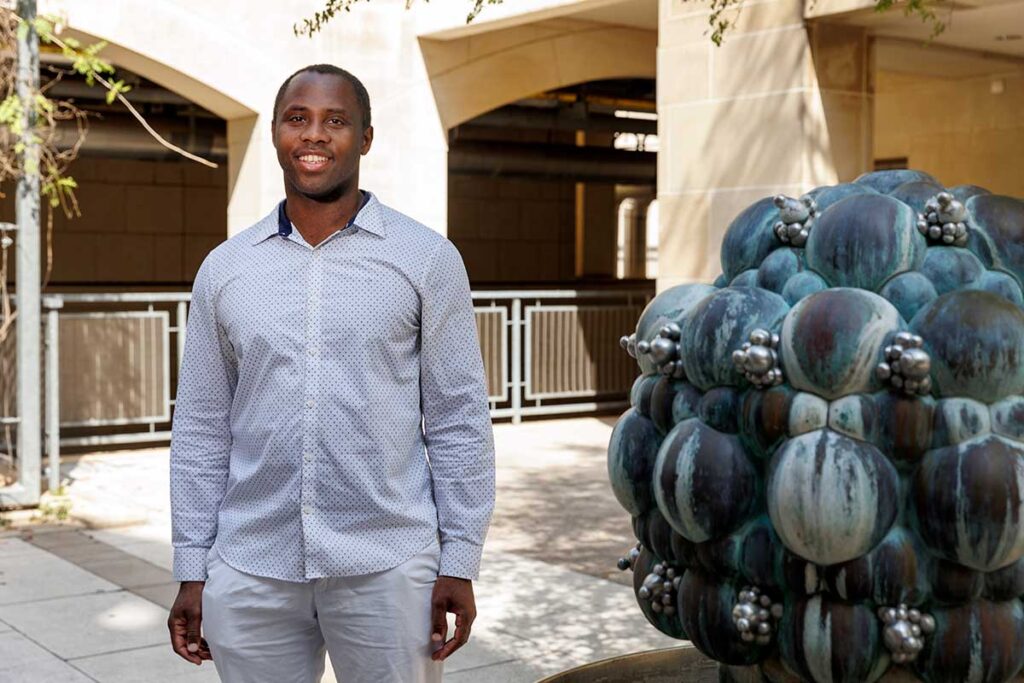 “It’s a very interesting and foundational, revolutionary time to actually be at the point where we’re taking the first of these images,” UTSA professor Richard Anantua says. (Sam Owens/San Antonio Express-News)

Because of his background, Anantua is heavily involved with a number of organizations and initiatives that aim to increase diversity in astrophysics. He has been made to feel keenly aware of his status as a rarity at some points in his education and career. Still, while he believes structural inequalities play a role in the underrepresentation of Black people in STEM, Anantua also contends they’re not wholly responsible for the phenomenon. Cultural differences between minorities with regard to academic expectations and achievement interfere as well.

“It’s hard to deny that America’s legacy of institutional racism and differential policies have had an effect to this day. It’s quite clear from data,” Anantua said. “But it’s also quite clear from data that there are significant differences in the current-day approaches to education.”

Regardless of the reason or reasons for racial minority underrepresentation in STEM, Anantua is invested in reducing it. While at Harvard-Smithsonian and U.C. Berkeley, respectively, he founded a campus organization for postdocs of color and served on the American Astronomical Society’s Task Force on Diversity and Inclusion in Astronomy Graduate Education, eventually contributing to the task force’s 2018 final report.

Since joining the collaboration, Anantua has only continued to demonstrate his commitment to broadening the breadth and depth of identities on display in the sciences. He serves as the lead of the collaboration’s Outreach Group for the Americas, which connects the collaboration with organizations such as the National Society of Black Physicists and is founding a new chapter of the collaboration in Texas along with fellow Black astrophysicist Brandon Curd.

In both roles, Anantua focuses on increasing training, research and publication opportunities for minority students — opportunities he describes as “the most important thing.” Thus far, he has established a paid summer internship in black hole astrophysics at the Smithsonian Astronomical Observatory for undergraduate and graduate students affiliated with the National Society of Black Physicists.

Rather than an assignment with a set due date, it is a project that could spool out far beyond the span of an individual human life, including Anantua’s own.