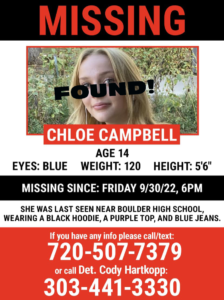 On September 30th, 2022, Boulder 14-year-old Chloe Campbell was reported missing by her mother, Dr. Jessica Knape. Since the report, the investigation into the teenager’s disappearance has been mired in conspiracy theories and false narratives.

Among these are fake obituaries published by uncredible websites that are riddled with malware and designed to look like real news sites; theories on social media that the family intentionally had her go missing in order to obtain some kind of media attention or monetary gains; false tweets that she has been found and recovered; and unverified reports sent to Yellow Scene Magazine’s office of a fake GoFundMe started by a third party. In addition, a number of bizarre, conspiratorial YouTube videos have been made by channels that seemingly have no connection to Boulder County or the family.

YS spoke to Knape as well as Boulder Police Department Public Information Officer Dionne Waugh in order to gain a clearer understanding of the situation.

Knape told YS that she has no knowledge of any kind of GoFundMe or any other fundraising service being started in her daughter’s name, stating that their family is not in need of any kind of financial help. She also has received reports that her daughter has been sighted alive and potentially in the company of an adult male from Longmont, presumed to be around 19 or 20 years old with a history of drug use and criminal activity. She believes that, due to her daughter’s mental and physical illnesses and the potential impairment of drugs and/or alcohol, her daughter may not currently be in her right state of mind and therefore is in serious danger. The family has been working with police to find their daughter, however, Campbell is currently listed as a “runaway” which means she is not considered a missing person and that the case is not under criminal investigation. Knape stated that her daughter has no history of running away and that doing so is not in her nature.

Boulder PD stated they do not believe there to be any foul play in Campbell’s disappearance and they do not believe her to be in any immediate danger. This is in direct contrast to the feelings of Knape and the rest of Campbell’s family. The family has hired a private investigator in response. The family has also sought to elevate the case beyond the investigating officer, Detective Cody Hartkopp, by reaching out to his superiors and Boulder Chief of Police Maris Herold to little avail. 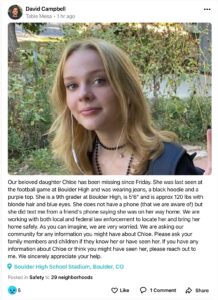 There is a reddit thread regarding Campbell’s disappearance in which a user designated extra-Ad-1612 states the following: “Her friend has texted several people that she is ok and doesn’t want to go home.” Investigation into this user shows that their profile is named “Hookedonphonics,” their handle has only existed for a month, the user is an adult, and the user regularly engages in paid advertising on the site. This is just one example of outside parties posing as individuals close to Campbell and/or her family to spread misinformation about Campbell’s disappearance. The reasoning for this is unknown to YS at this time.

While YS cannot comment as to the exact nature of Campbell’s disappearance, two things are known to be true: a teenager, a child, is missing and her family wants her home.

14-year-old missing for more than a week could be in danger, Boulder Police say

Missing Colorado teen Chloe Campbell found alive, police don’t believe she was held against her will