On Wednesday, October 7th, upon the urging of a friend who works with Dr. Knape, our publisher re-shared Dr. Knape’s post about her missing daughter, Chloe Campbell, on social media.

By Thursday we had begun receiving messages to our office regarding conspiracies surrounding her disappearance. The internet was abuzz with false information.

On the afternoon of Thursday, October 6th, Yellow Scene Magazine Staff  Writer, Thomas Rutherford reached out to Chloe Campbell’s mother, Dr. Jessica Knape, to clarify the facts behind the conspiracy theories circulating on fake websites and social media, as well as to understand what was happening with the Boulder Police Department on this case.

From there we called the Boulder Police and spoke with Public Information Officer Dionne Waugh, who stated Boulder PD did not believe there to be any foul play in Campbell’s disappearance and they did not believe her to be in any immediate danger.  We asked if they had spoken to Chloe and were told that was confidential information.

We called Dr. Knape back to ask her stance on the Boulder PD position, and she stated the family did not feel the Boulder Police had escalated Chloe’s disappearance to the level it needed.

As the only publication as of Friday, to have reported on Chloes status, we could not understand why there was zero reporting being done, beyond fake websites circulating false narratives, especially in light of the James Wendall case earlier this year.

YS posted the article, Missing Boulder Teen’s Disappearance Mired in Conspiracy and Falsehoods Thursday night at 8:57 pm, and by 10:30 pm had experienced over 1000 views. By the end of the day Friday, YS’s website had reached over 10,000 views for that article alone. Still, no word from other media, and the only follow-up we received from Boulder Police Department was a comment on our social media page reiterating there was no evidence of foul-play. 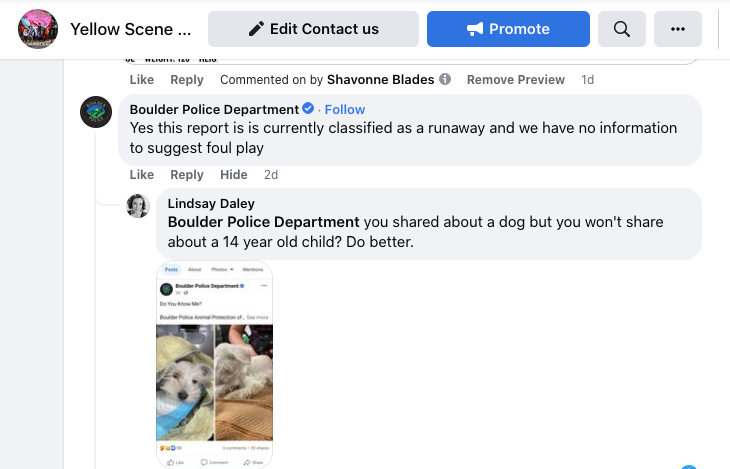 On Friday, JonBenet Ramsey’s brother reshared our tweet and then continued to make pleas with the Boulder Police to increase their investigation into finding Chloe and bringing her home.

By Saturday, October 8th at 11 am, (over a week after she went missing) most major news stations were now reporting on Chloe Campbell’s disappearance due to a Press Statement the Boulder Police Department issued on social media and on their website on October 8th, 2022. Avoiding delays is critical in cases of missing persons.

Boulder police are seeking the community’s assistance in locating a missing 14-year-old girl who is believed to be a runaway but could be in danger.

Chloe Campbell has been missing since Friday, Sept. 30. She was last seen at the Boulder High football game.

Investigators have received some information from friends who appear to have been in contact with Chloe, and there have been a few reported sightings of her in and around the Boulder area. However, no one in her family has spoken with Chloe since Sept. 30. Friends have received messages that they believe could be from Chloe saying she is safe with a “family” in Arizona and does not want to return home, but family and police have been unable to confirm if these messages are, in fact, from Chloe or true.

This case presently does not meet the criteria for the issuance of an Amber Alert, but investigators are growing increasingly concerned about the teen’s safety as it is believed that she has no access to money or her medication. She may be with an adult male.

Chloe’s loved ones have posted fliers around town, and police are hoping that amplifying this message will help in reuniting the child with her family. Chloe’s family wants Chloe to know that they just want her home safe and that she is not in trouble.

Police do not have any additional information to share with the public at this time, and as such, will not be doing any media interviews. Chloe’s family has indicated they would be willing to speak with reporters.

“Boulder Police said friends of Chloe’s have reported getting text messages that they believe are from her, but Police have not been able to confirm if the messages are actually from Chloe.

The messages say that she is safe with a family in Arizona and does not want to return home. Police also don’t know if this is true.

Because Chloe does not have access to money or her medication, Boulder Police said they are getting increasingly worried about her safety.”

It is now the ninth day that Chloe was last seen by her family. Early response to these situations by authorities is critical in locating missing persons. Reports that Chloe may have been taken to Arizona are now being tracked down. Along with working with the Boulder Police Department, the family has hired a private investigator. They are keeping the public informed through an online Google Doc they have shared as well as through social media. 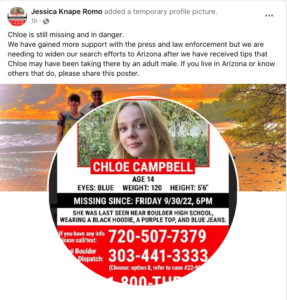 Chloe’s family wants to thank you all for the outpouring of support and outreach as we continue to look for her now 9 days after her disappearance. As of the time of this writing, Chloe is still not safe. Her whereabouts are still unknown to authorities or her family and we believe her to be critically at-risk due to a number of factors:

How can you help?

Missing Colorado teen Chloe Campbell found alive, police don’t believe she was held against her will

Anyone with information on Chloe Campbell’s whereabouts is asked to call or text 720-507-7379. You can also leave an anonymous tip at 1-800-THE-LOST. 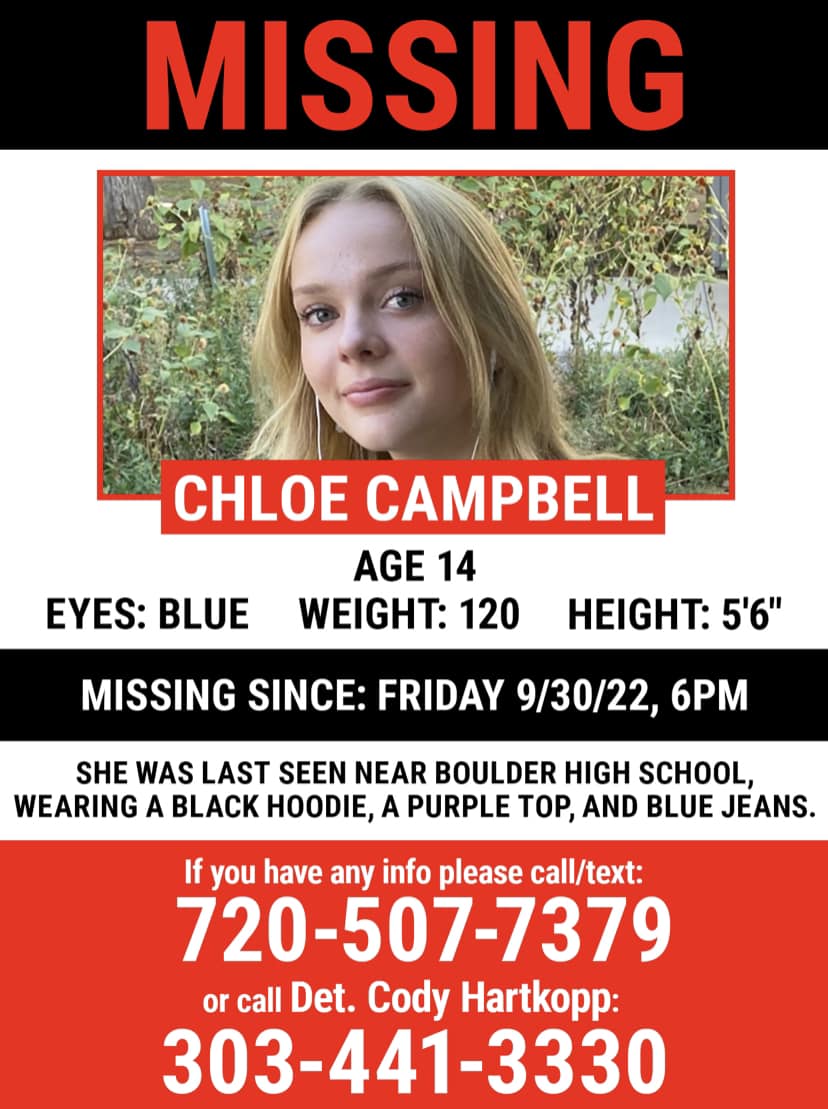