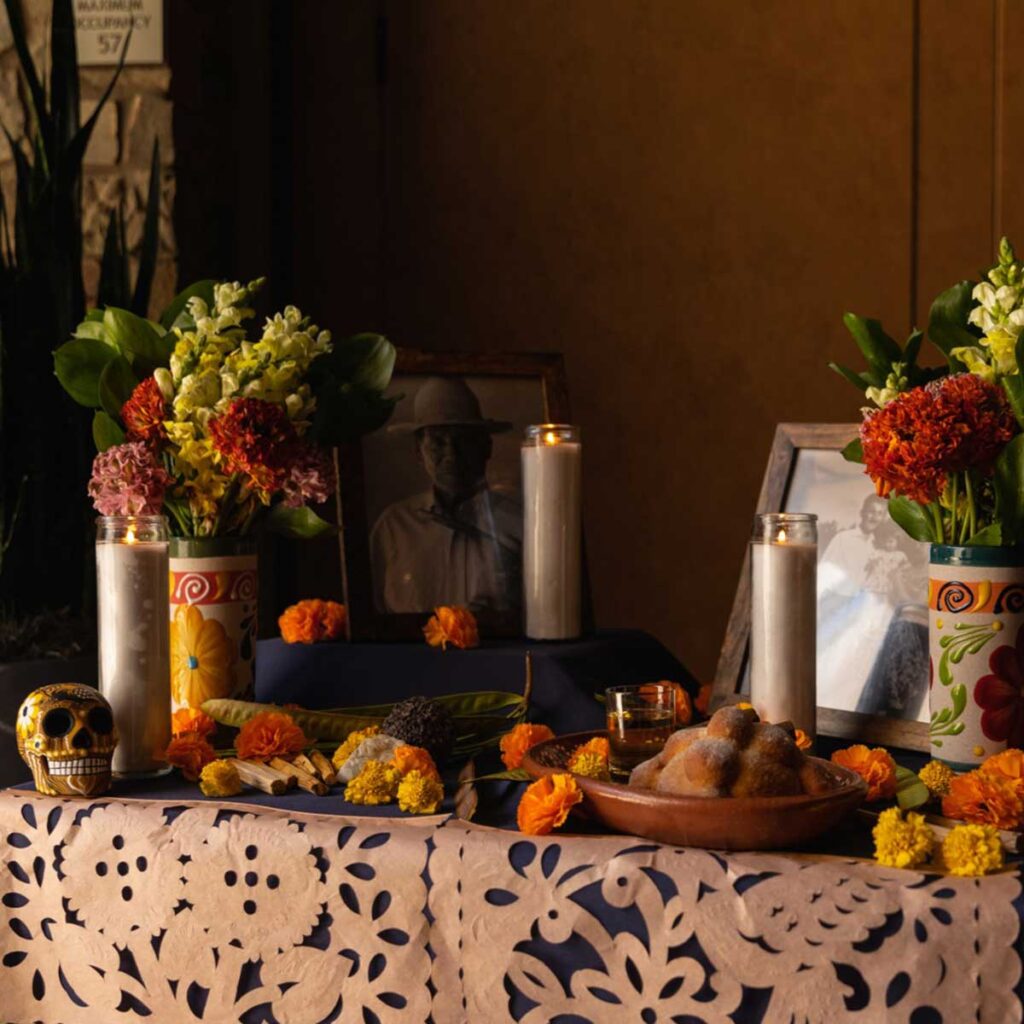 The menu is available now until November 6

As guests approach the entrance of Toro, the Pan Latin American Restaurant in Cherry Creek, they’re welcomed by a generous and colorful altar, or ofrenda. Positioned at the side of the door and extending parallel to the bar, it serves as a warm invitation to step into the restaurant and its culture.

The ofrenda was built by Toro’s Executive Chef Oscar Padilla in just six hours as part of an annual celebration. His quick work was the result of years of practice. Though he was born in Los Angeles, he spent his youth in Mexico living with his grandmother and learning the tradition from her.

Now settled in Colorado, Padilla looks forward to putting his Dia de Los Muertos celebration together for customers. “One of the purposes for me working in Toro with Richard Sandoval and making these events is that I get the opportunity to share with guests and neighbors what’s behind these amazing traditions. It’s something I love and that I want to share with everybody.”

As we talk, there are a few things Padilla communicates particularly eloquently. One of them is clarifying the focus of the celebration. “People think we are celebrating the dead when it’s totally different. We are celebrating life and remembering all our family after they pass away. It’s a celebration, a party to remember what they love and still give it to them when they’re on the other side.”

He also wanted to clarify that, in Mexico, celebrants use the term “Dia de Muertos,” dropping the “los” that’s become common in the U.S. He shared that celebrants can still honor deceased individuals from the past, even when those individuals’ families aren’t around.

Toro’s chef is at his most passionate when sharing his culture from in front of a stove or over a tortilla press. His three-course specialty meal at the restaurant proves this point. It begins with Tortilla Talavera, fresh tortillas featuring edible flowers to mirror Talavera tequila bottles.  It also includes green pipian, white mole, panela cheese, mushrooms, and the condiment al ajillo.

He serves the tortillas family style, explaining that “People think that a taco is a dish, but it’s not a dish, it’s a style of how people eat. People use a tortilla as a plate, a spoon, even as a napkin. In Mexico, there’s a tradition where people buy a lot of different things and people can add what they want to it as they go along.”

Padilla also talked to us about the other elements of his holiday celebration including the structure of his ofrenda.

Toro’s features prominent Mexican entertainers including the actors Cantinflas and Sara Garcia as well as the iconic wrestler El Santo.

The ofrenda also features a prominent photo of Padilla’s grandfather who traveled widely making his living as a mountain climber. Padilla shared that it was an occupation that led him to his wife. “My grandfather was in a climbing club and my grandmother was in a different club. One day, they met on the peak of a mountain in Mexico (the volcano Popocatepetl) and fell in love. The rest is history.” Now, the entire family, including Padilla’s aunts,uncles, wife and kids, climbs. However, Padilla himself eventually let climbing fall by the wayside in favor of cooking.

When she wasn’t climbing, Padilla’s grandmother not only taught him about Dia de Muertos and other traditions, she was also his first culinary teacher. “There were just a few of us, 15 or 20, and she made food for 40. Then she reached out to all the neighbors. She showed me that dinner isn’t only for food, it’s to share with everyone. That’s something I want to share here at Toro.”

Padilla’s grandmother still lives in Mexico but remains a cherished part of his life. She is currently in the middle of extended travel in the U.S. Her itinerary is full of adventurous experiences such as camping at Yosemite with family; spending time in Las Vegas casinos; and visiting area 51 in New Mexico.

At the end of the trip, she’ll visit with Padilla and when she returns to Mexico, he’ll accompany her. They’ll celebrate Dia de Muertos together and with family, at home. The same way he’d done years ago.

As he describes it. “It’s one of the more beautiful celebrations and traditions that Mexico has to share with everyone. People celebrate at home and in the cemetery too. It becomes a kind of party. It is beautiful.”