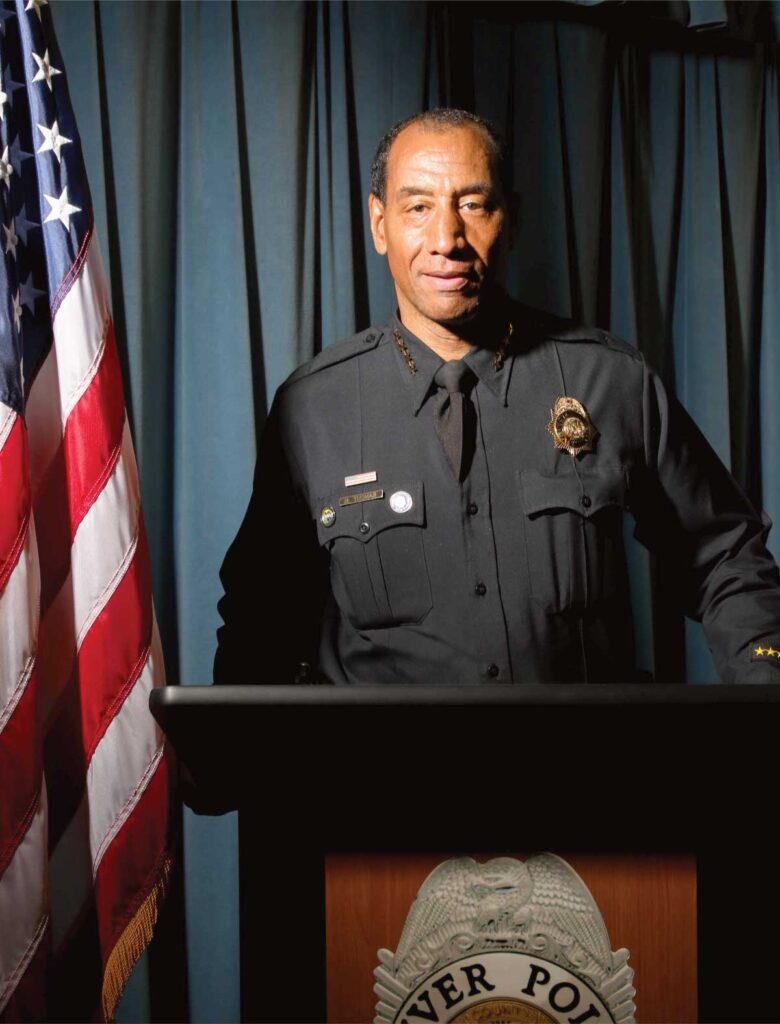 Despite the countless stories published nationwide about the misuse of jurisdiction and force in handling citizen encounters in Denver, Colorado, a new feeling of hope accompanies the swearing in of Ron Thomas as the new Denver police chief. The event took place on October 18, one day after the Denver City Council consented to Mayor Michael Hancock’s nomination.

Thomas replaces former Denver Police Chief Paul Pazen, whose retirement was effective Oct. 15 after a 28-year career with the department.

Thomas hopes to change the narrative of what it means to be a police officer and public servant for the community.

The longtime Denver resident has served 33 years with the Denver Police Department (DPD), starting his academy training in 1989. He was inspired by his parents to continue their legacy of being public servants. With a mother working in social services and a father as a mail carrier, he wished to one day find his unique path to support his community. The inspiration led to his remarkable success and contribution to protecting the Denver metro area with the DPD.

Thomas was fortunate enough to intern with the DPD as a public safety cadet during his time at the University of Colorado Denver where he majored in criminal justice while minoring in sociology and psychology.

He shares, “That opportunity really brought me closer to seeing what police officers actually do and the impact that police officers can have on their community and individuals that they engage with on a day-to-day basis, and that narrowed my focus to wanting to use the police department which is where I wanted to provide service to the community.”

The new chief hopes to emphasize just what it means to be a public servant after multiple backlash protests against the department’s misuse of force when dealing with specific calls.

“I believe right now that there are some communities out there who don’t believe that the DPD works for them, and that’s not true, but I know that we need to do a better job of making sure that everyone understands that,” he explains.

Thomas hopes to focus on many issues in the community involving the re-establishment of trust within various Denver communities, lowering the crime rate overall, and engaging with more community partners limiting police-citizen contact for low-level incidents.

“There are a number of issues that I want to focus on; one is crime is significantly higher than it has been in years past, so I really want to lower that. I know that there are several hotspots where the majority of crimes (specifically violent crimes) occur, so focusing specifically on those hotspots using a variety of tactics and partnering with community organizations and other city partners to address the infrastructure and other social correlates that relate to crimes in those communities,” says Thomas.

He goes on to say, “Second thing is taking a look at all of our calls and seeing which of the calls don’t necessarily need an officer to respond and address that call. There are a lot of calls for service that can be handled over the phone or online so working with our partners of Denver 9-1-1 to educate folks when they’re contacting them on the phone that there are additional options that they have for reporting crime rather than having officers show up at their door.”

“It’s a group of mental health clinicians and paramedics that appear in a van and respond to calls that don’t have any violent component. It’s usually someone that’s having some kind of drug addiction or mental health challenge. There are no officers involved in that,” says Thomas, who underscores that by applying the experts to those particular issues, police are allowed to more keenly focus on violent crime.

On the note of reestablishing trust within the community, Thomas recognizes that he has provided a response to the 112 recommendations that came from the Reimagining Public Safety Committee that is committed to working with the police department as members of society expressing the needs and requests within the community for advancing public safety.

“That’s a committee that got together and talked about how they really wanted to see public safety in a form that was more responsive to community needs, particularly disadvantaged community needs, so we’ve already implemented probably 74% of those recommendations. There are very few recommendations that we have not yet adopted or are planning to adopt.

“The handful that we have elected not to adopt, there’s really more of a legal component to it, or it’s really outside of our scope in order to really make a change there, but I’m hoping that that’s going to be helpful in getting folks to understand that we really do work for them because this is a community-led task force that provided recommendations that we largely support.”

Most recommendations from the committee focus on community-based policing, where officers are less involved in physical interactions with citizens. Thomas hopes to prioritize the optimization of technology, including speedometers and cameras as well as community crash report technicians, to enforce the law while limiting the amount of police-individual interaction in response to some of the 112 requests by the committee.

“The committee suggested we remove police officers from making contact with citizens for traffic and other justifications. In response, we have hired 36 crash report technicians. These are civilians that go out and respond to traffic accidents and take the reports, so there’s no police involvement in that at all,” says Thomas. “We also deploy photo radar vans so they can issue tickets to people that are speeding, and no police intervention there. There are also red-light cameras and things like that, so we are providing safety without having to introduce a uniform police officer. There are ways to enforce some laws without having to introduce a uniform police officer.”

The DPD veteran also addresses the efforts made in sensitivity training for Denver Police officers, stating, “Every one of our officers has gone through what we call ABLE training – Active Bystandership for Law Enforcement, and really it’s an early intervention program, so it teaches officers how to kind of step in when a situation seems to be going in the wrong direction.”

He describes it as “a national best practice de-escalation concept that teaches how to use tactical placement as well as continual assessment of a situation and unique communication skills to resolve things without having to utilize force. It’s just a better de-escalation concept that has proven in areas where it’s been deployed across the country to have significant reductions in physical usage of force by officers and injuries to members of the community.”

As Thomas enters the role of the new Denver police chief, he says, “I plan to do more collaborations. There were a lot of innovations that Chief Pazen initiated, and I want to continue with those things that were positive, and I want to be an even greater collaborator with the community than he was.”.