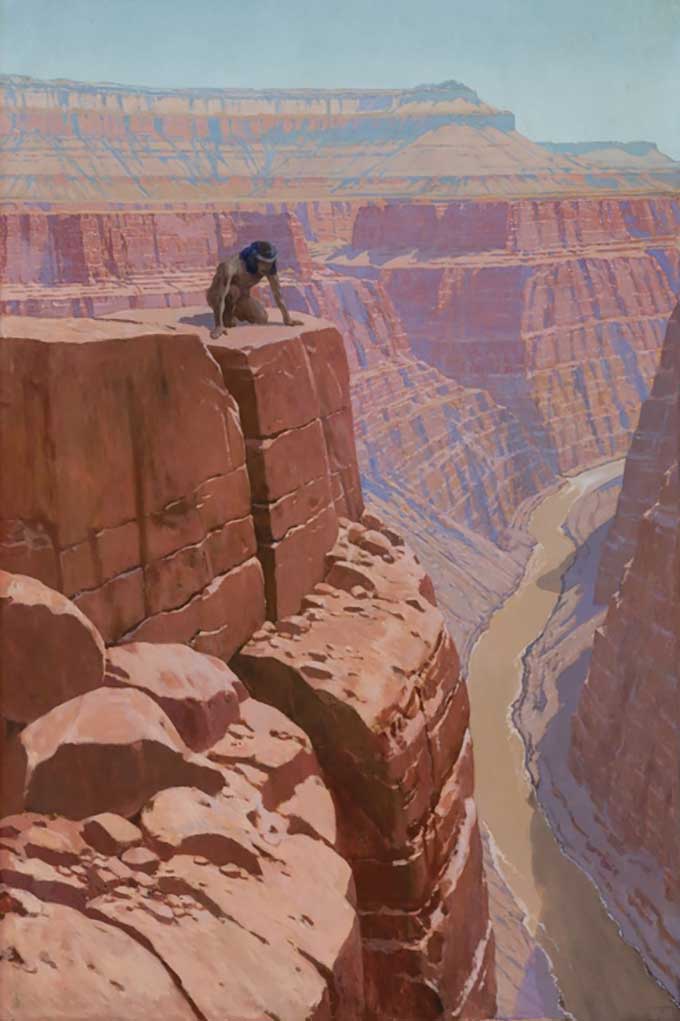 Denver — November 15, 2022 — The Denver Art Museum (DAM) today announced the debut of Near East to Far West: Fictions of French and American Colonialism. This exhibition opens March 5, 2023 and is on view through May 28, 2023, in the Anschutz Gallery on level 2 of the museum’s Hamilton Building. Near East to Far West will be included in general admission, which is free for everyone 18 and under as well as for museum members.

Organized and curated by the DAM’s Director of the Petrie Institute of Western American Art, Jennifer R. (JR) Henneman, Ph.D., the exhibition features more than 80 artworks, includingpaintings, sculptures, works on paper, and decorative arts, and explores the many ways that the style and substance of French Orientalism directly influenced American artists and their representations of the American West in art and popular culture during this period.

French Orientalism refers to artworks produced by French artists during the 1800s inspired by North Africa and the greater Islamic world. Their creation paralleled French colonial expansion into Algeria beginning in the 1830s and, as the United States expanded westward, presented a template for how American artists depicted landscapes and people of the American West. As a result, the styles, motifs, and meanings of both French Orientalism and western American art reflect fears, desires, and curiosities about “unknown” lands during the process of colonization. In Near East to Far West, visitors will be encouraged to compare the visual and historical aspects of French Orientalism and artworks of the American West and reflect on the impact of these representations into the present.

Presented for the first time in Denver, this exhibition proposes that western American artworks of this period can be viewed through the lens of French Orientalism, showcasing a blend of fact and fantasy that combines exceptional technique with creative license. 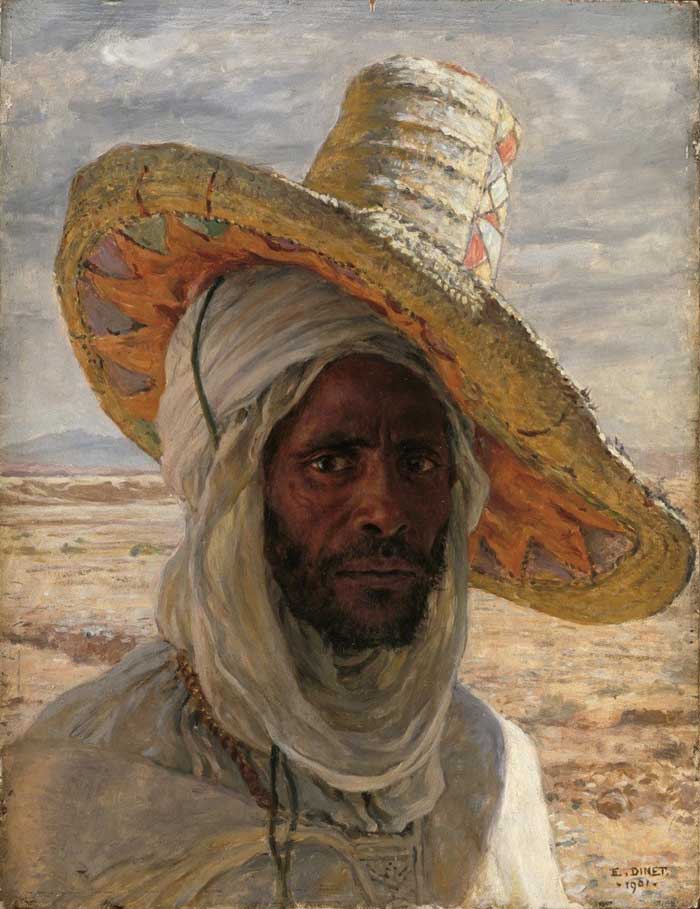 “In the 19th and early 20th centuries, regions of the American West were as foreign and unfamiliar to many Americans as places like Morocco and Algeria were to Parisians. Through the exquisite paintings in Near East to Far West, this show begins to tease apart the facts and fictions presented in the art of the time,” said Christoph Heinrich, the Frederick and Jan Mayer Director of the DAM. “Our collaborations with community groups and scholarly consultants focused on gathering insights into how best to provide the context around stereotypes and tropes present in the works. Near East to Far West offers visitors the opportunity to experience the beauty of the artworks while also learning more about the historical context in which they were created.”

Near East to Far West opens by introducing historical context and the styles and motifs of French Orientalism through paintings by Eugène Fromentin, Nasreddine (Alphonse-Étienne) Dinet, Jean-Joseph Benjamin-Constant, and Alexandre-Gabriel Decamps, as well as a selection of work by American Orientalists including Fredric Arthur Bridgman and Elizabeth Nourse.

“Visitors will be transported by the beauty of the artworks on display. Additionally, we hope they will consider what lies beyond the frame and engage with the bigger contextual picture,” said JR Henneman. “Near East to Far West aims to acknowledge complex colonial histories, celebrate artistic achievement, and question ongoing stereotypes. The exhibition offers a gateway into a historical period of colonial expansion, but also prompts us to consider what we as viewers now bring to these artworks. How have their meanings changed over time, if at all? What expectations or biases might we have inherited, and how might considering this important art historical story change or modify what we think we know about the world… or what we think an artwork can tell us about it?”

As the gallery interpretation makes clear, some artworks present biased representations of people and places of North Africa and the American West through an “Orientalizing” lens that enhances their perceived exoticism. Rather than factual representations, these artworks are composite fictions that reflect curiosity, racial and political biases, thirst for physical and aesthetic challenges, and hopes to succeed in competitive art markets. Paintings by Eugène Delacroix, Jean-Léon Gérôme, Jean-Joseph Benjamin-Constant, Alfred Jacob Miller, George de Forest Brush, select members of the Taos Society of Artists, and many others, accompanied, but rarely acknowledged, the devastating consequences of colonial expansion on Indigenous peoples, landscapes, and wildlife in North Africa and the American West. 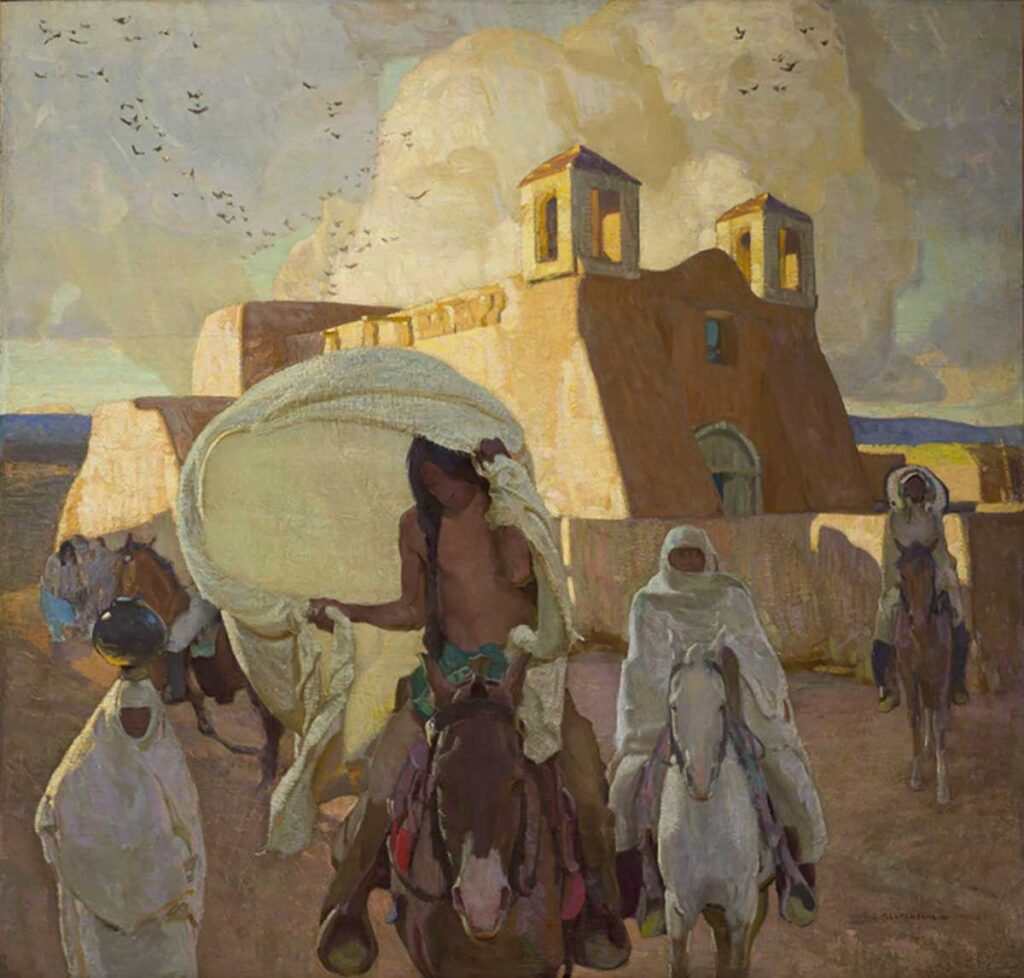 Gallery themes explore these works by making artist-to-artist comparisons, including Eugène Delacroix’s influence on American artist Alfred Jacob Miller; the influence of popular literature – especially Arabian Nights and the Bible –  on representations of desert regions by artists including Fernand Lungren, Eugène Fromentin, Henry Farny, and Gustave Guillaumet; and also the impact of westward expansion on the environment and animal kingdom of the west’s so-called “untamed lands.”

The 1893 World’s Columbian Exposition in Chicago is closely examined in “The Wild East,” exploring the crucial role of world’s fairs in disseminating Orientalized ideas about global Indigenous cultures. Work by Charles Marion Russell and Frederic Remington underscore the fact that an artist did not need to travel to North Africa to be influenced by its imagery.

A final section, “Lands of Light,” articulates the French roots of select members of the Taos Society of Artists, including Joseph Henry Sharp, Bert G. Phillips, Ernest Blumenschein, Eanger Irving Couse and Julius Rolshoven, who absorbed lessons from their teachers Jean-Joseph Benjamin-Constant and William-Adolphe Bouguereau. Their interest in the geography and cultures of the Taos area echo the fascination of their French teachers with elements of North Africa, namely the clear air and brilliant colors of the high desert, expansive landscapes, adobe architecture and Indigenous people, rendering both North Africa and the American Southwest important places of artistic pilgrimage.

The museum thanks its community collaborators for their input and assistance in creating both content and context for the gallery experience. Stakeholders in the Indigenous, Arab American and Muslim-American communities contributed feedback in focus groups, insights in “Community Voices” labels on the works, and thought-provoking questions throughout the gallery. The exhibition’s NEH Advisory Committee provided scholarly input for the presentation.

Near East to Far West: Fictions of French and American Colonialism is organized by the Denver Art Museum. It has been made possible in part by a major grant from the National Endowment for the Humanities: Democracy demands wisdom. Research for this exhibition was supported by the Terra Foundation for American Art. It is presented with generous support from Keith and Kathie Finger, the Gladys Krieble Delmas Foundation, Sotheby’s, the donors to the Annual Fund Leadership Campaign, and the residents who support the Scientific and Cultural Facilities District (SCFD). Promotional support is provided by 5280 Magazine and CBS4.

Planning Your Visit
The most up-to-date information on planning a visit to the Denver Art Museum can be found online under the?Plan Your Visit tab. Use this page to find details on ticket pricing, public transit options and access information. General admission for museum members is free every day. Youth aged 18 and under, regardless of residency, receive free general admission everyday thanks to the museum’s Free for Kids program. Free for Kids also underwrites free admission for school and youth group visits.

COVID-19 Protocols
The safety of visitors and staff remains a top priority, and the museum is continually updating its COVID-19 safety and security protocols based on advice from the CDC and federal and local guidelines. Current protocols can be found in the “Visit” section of the museum’s website.  denverartmuseum.org/visit

About the Denver Art Museum
The Denver Art Museum is an educational, nonprofit resource that sparks creative thinking and expression through transformative experiences with art. Its mission is to enrich lives by sparking creative thinking and expression. Its holdings reflect the city and region—and provide invaluable ways for the community to learn about cultures from around the world. Metro residents support the Scientific and Cultural Facilities District (SCFD), a unique funding source serving hundreds of metro Denver arts, culture and scientific organizations.