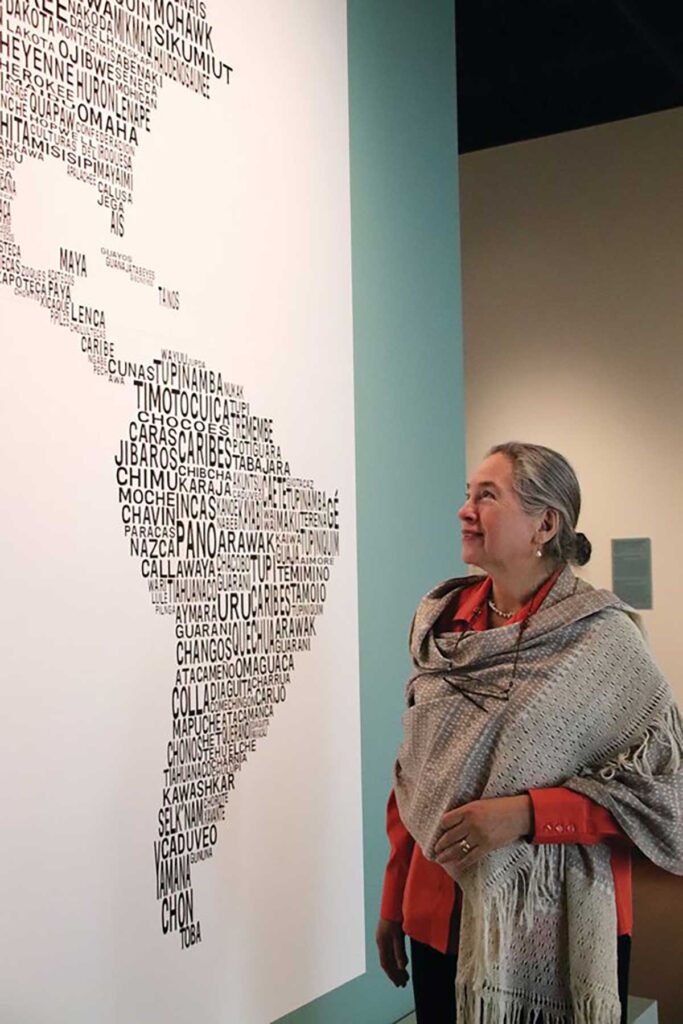 Clara Ricciardi, the Denver Art Museum’s senior Spanish language and community engagement liaison, will be honored at the museum’s 40th Collectors’ Choice Fundraiser Gala for her efforts that have made the museum more diverse and inclusive. Courtesy of Colorado Community Media

DENVER – Walking through the Denver Art Museum with Clara Ricciardi is like traveling back in time to Mesoamerica and experiencing it firsthand.

She’ll tell the story behind a ttipqui pin used by the Inca to pin clothing, or point out an intricate detail — and why it’s there — in a Spanish colonial era painting.

The museum’s Art of the Ancient Americas and Latin American Art collections are here to “empower (people) to learn more,” Ricciardi said.

She’s worked toward that goal with the museum for three decades. On Nov. 18, the museum will honor Ricciardi’s efforts at its 40th Collectors’ Choice fundraiser gala. Collectors Craig Ponzio and John and Sandy Fox will also receive accolades for their visionary contributions to the museum.

Ricciardi, who has a background in law studies, is originally from Mexico City and at age 21 came to California to work for the Consulate General of Mexico. While there, she met Geno Ricciardi, whose family has a century-long connection to Colorado. On their first date, Geno brought Clara to Colorado and, more specifically, the DAM.

“It was a nice treat to see the objects (that are) part of my culture,” she said.

The Ricciardis moved to Denver in 1988. Clara began to feel homesick for her Mexico City, a place she describes as an open-air museum where “you are surrounded by art.”

So, in 1992, when a friend told her about a volunteer opportunity with a traveling exhibit coming to the DAM called “Chicano Art: Resistance and Affirmation,” she jumped at it.

And thus, Ricciardi found her place to connect with community and art.

One such item is a metate, which roughly translates to a grinder. It dates back thousands of years in Mesoamerica, but is still found in some households today. Seeing a metate in the museum, people would sometimes comment that they remember one in their grandmother’s home, Ricciardi said.

“They see themselves here, like I did,” Ricciardi said. “They’re seeing their culture reflected in a place that represents art.”

When Ricciardi began, the museum did not offer bilingual tours. So she led efforts to get them going. She also forged relationships with school districts across the metro area to engage children of every level as well as their families.

“Clara knows the power of language to connect,” said Heather Nielsen, chief learning and engagement officer at the DAM. “She brings an infectious energy and a caring hand to every interaction she has. Clara never tires of making the DAM feel just like home to so many visitors, warmly welcoming them through the doors in Spanish and always with the brightest of smiles.”

Another highlight of Ricciardi’s tenure is the annual Día del Niño. It marked its 20th year this year. Día del Niño, which translates to Children’s Day, is a tradition in Mexico which has been brought to the United States.

Ricciardi “has planned every detail of the amazing Día del Niño event, as thoroughly as she has overseen the implementation of Spanish language in our galleries of Ancient American and Latin Art, and in all our special exhibitions and galleries,” said Christoph Heinrich, director of the DAM’s Frederick and Jan Mayer galleries. “Without her gentle but tenacious push, the DAM wouldn’t be what it is today.”

All of these efforts are shining examples of Ricciardi’s pride for the DAM.

“The museum is a little treasure in the city,” Ricciardi said. “It’s a way of connecting to the rest of the world and the art inside is not just three-dimensional. It is alive.”