As ageism in the workplace persists, major demographic shifts will force employers to rethink the value of an older workforce that isn’t ready to hang it up. 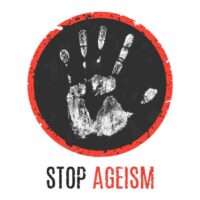 Pulitzer and Nobel prize winning author Pearl S. Buck once said that “to find joy in work is to discover the fountain of youth.” Another great writer by the name of Mark Twain is credited with saying that “age is an issue of mind over matter. If you don’t mind, it doesn’t matter.”

The latter half of our lives is said to be a time of getting things right. We spend our youth figuring out how to live so that we can spend our seasoned years enjoying life. And many people believe that a big part of enjoying life is finding purpose and knowing that you’re doing something valuable.

Purpose later in life, of course, looks different for everyone. But that’s the blessing of aging. By the time we are nearing a traditional retirement age, many of us are fully discovering what is truly important to us and what brings us joy and fulfillment. With a little luck we find ourselves in a position to pursue these things, perhaps even as a second career.

For many older people, that pursuit of purpose involves some form of employment. Retirement isn’t what it used to be. Many people are staying healthier for longer. When we are in our 60s and still going strong, there’s no reason to stop chasing dreams and finding a purpose for decades to come.

This also might be the perfect time for a new chapter. The kids are grown up and on their own, financial options are often more accessible, and we’ve had the time to think about what we really want to do with the rest of our lives. For many older Americans, the thought of spending the golden years in a rocking chair just doesn’t cut it. We still want to be in the arena, not watching from the booth.

Lisa Jensen, program manager at Workforce Boulder County, confirms this. “Older adults want to be engaged in the world in a meaningful way,” she says. “And a lot of older people are very enthusiastic about it.”

However, getting back into the job market at 65+ can be intimidating. Things have changed dramatically in the internet age, and older job seekers can feel overwhelmed by this. It can seem easier for someone of the younger generations to navigate today’s job seeking landscape because they have come of age in the current technological environment. For someone who may not have submitted a resume in 20 or 30 years, it can seem like a whole new world out there. Add to that the reality that age discrimination is real. At 65 or older, how does one convince an employer that they are right for a job that might typically go to someone in their 20s or 30s at half the salary? 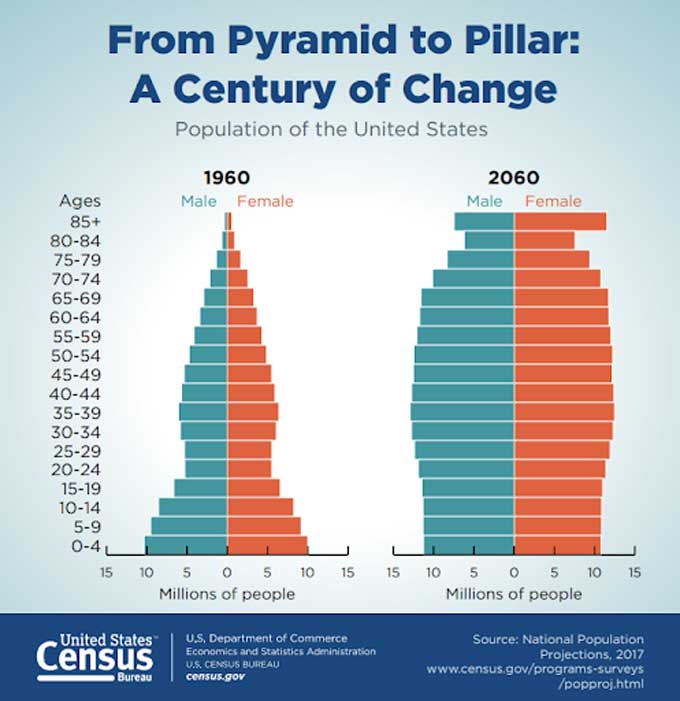 Workforce Boulder County is there to help with this. Jensen advises that the situation is a two-way street. While employers should consider the unique benefits and value that an older employee can bring to the table, older job seekers should also go about it with the right mindset.

Many older job seekers can legitimately claim a wealth of knowledge and skill. While it is important to highlight that, Jensen advises that older job seekers and employees should also be willing and eager to learn with an open mind from their younger colleagues. If you are an older job applicant, chances are that the person interviewing you for a job will be younger, possibly significantly so. A good approach to ease any age concerns is to subtly convey an eagerness to learn from others while offering the balance of more experienced insight. Jensen believes this can be a killer strategy.

Updating hard skills is also a great idea, and this is easier to do now than ever once we know where to look. To help with that, Workforce Boulder offers extensive skills training options funded by ten grants for retraining programs. Their offices also offer free on-site access to LinkedIn training courses. Many of these courses come with valuable credentials that can be displayed on LinkedIn profiles and resumes. These don’t have to be time-consuming undertakings as many LinkedIn courses and other similar options are surprisingly efficient.

When it comes time to apply for a position, as we all know, we must have that polished resume in hand. Workforce Boulder can help here as well. Jensen recommends that older job hunters put some thought into how to target their resume for the desired position. A laundry list of all the jobs you’ve had in 35 years is probably less effective than a one- to two-page narrative that tells your unique story and highlights why you are perfect for the job.

Janine Vanderburg is the director of Changing the Narrative Colorado, an anti-ageism advocacy and awareness organization. Her team digs deep into the issue of ageism in America, and Vanderburg has personally led 42 workshops on this subject across the state since 2018. Vanderburg and her team are convinced that many employers are missing a major opportunity by undervaluing older workers and applicants.

“We need to educate employers on what they are missing out on,” said Vanderburg. To that end, her team created a presentation called “A Business Case for Older Employees.” The idea is to focus less on the legal issues and more on the business opportunity. Vanderburg said this is an easy sell once she is in the door. “When we educate employers about the business case, most of them get it.” Nevertheless, the preference for “younger” talent persists. “In the workplace there is a belief that younger is better,” said Vanderburg.

These biases permeate through our working culture in more ways than one. Ageism in the workplace can be overt, but more often it is subtle. Vanderburg explained to me three categories of ageism: institutional, interpersonal, and internalized.

The institutional aspect involves specific policies or actions that result in ageist decision making. One example is the practice of expecting job applicants to state the date of college graduation which circumvents laws that prohibit employers from asking for a birth date. Changing the Narrative Colorado is lobbying to update the law to prohibit requiring a graduation date.

Interpersonal ageism is more subtle and could be found in the exclusion of older employees from meetings or comments that allude to someone approaching retirement regardless of whether said employee wants to retire. These put-downs are often unintentional but damaging nevertheless. 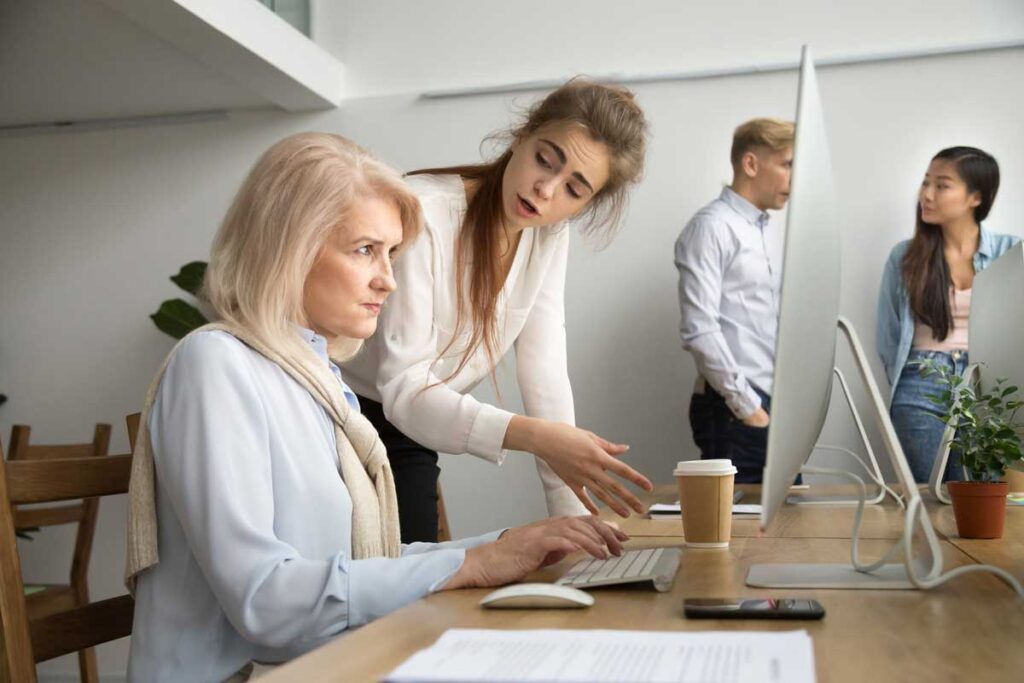 The third category, internalized, is found in self-deprecating discussion about one’s own age. It seems older employees sometimes feel the need to play along with subtle allusions to their age in a no-harm-done kind of water cooler banter. This should sound familiar to most people who work in an office environment where it is common to hear older employees making light of their own advanced age. These comments may seem disarming, but they can contribute to reinforcing the institutional and interpersonal ageism that can result in real discriminatory consequences.

These nuances are part of the education that Vanderburg and her team at Changing the Narrative Colorado seek to convey during their presentations. But Vanderburg also believes that the younger-is-better mindset is not sustainable in our current and future economy because of demographic changes. Birth rates are low, and people are living healthier for longer than ever before. At the same time the Baby Boom generation is now reaching peak retirement age. This is all contributing to a labor shortage that is likely to persist and intensify.

In 1960 the United States had a young population with a large cohort entering the labor market and a much smaller number of people over 65 drawing pensions and social security. The predicted demographic curve a century later, in 2060, is dramatically different. Our current wave of retiring baby boomers will not be replaced with equivalent numbers by the smaller generations following their footsteps. As a result we are heading into an era where the elders make up a large part of the population.

This has substantial implications for our society. Under current traditions where people generally retire between their mid-50s and mid-60s this demographic shift would put enormous pressure on the economy and social safety net. Essentially, fewer wage-earning and tax-paying workers would have to provide the revenue base to meet the growing needs of an enormous retired class. These demographics alone force us to re-think what it means to retire. As Vanderburg told me, “America is aging, and no one will be able to fill a talent pipeline with only younger workers.”

Despite this looming challenge that is already beginning to impact our economy, ageism in the workplace is still prevalent. A 2018 ProPublica and Urban Institute study found that half of older American workers are pushed into retirement before they are ready. This includes people who got laid off as well as those who report being nudged out the door in other ways. When these not-ready-to-retire workers then try to get back into the labor market, they are often surprised by the difficulty in finding comparable employment. These people are often at the pinnacle of a career with more skills and experience than their younger competitors. But the study showed that only one in 10 of them are able to return to their prior earning level.

A 2020 AARP study indicated that 78% of older employees say they have seen or experienced age discrimination in the workplace. Dishearteningly, this is the highest percentage since AARP began tracking this metric in 2003. When Resume Builder surveyed 800 hiring managers, four in 10 admitted to age bias when reviewing applicants.

This must change. Our economy will be unable to tolerate the continuation of age discrimination in the workplace. We will go from pushing older workers out the door to begging them to come back. The time to change the narrative and find ways to embrace older workers is now. It is a huge opportunity all around for the economy, employers, and especially for older Americans who want to stay in the arena as we live longer, healthier lives.

View all posts by Doug Geiling →
Doug is a Colorado native, a Northglenn High School graduate (class of 1993), and Colorado State University alum (class of 1997). He currently resides in Edgewater near Sloan Lake, but has previously lived in Erie and Lafayette. Doug is a backpacker, fly fisherman, traveler, writer, and business management consultant.