Updated 1/19/2023 11:31 PM to include Eric Budd’s Op-Ed in the Boulder Weekly; Boulder’s police shouldn’t pick their own oversight

The Boulder Police Oversight Panel (POP), gained national and community-wide attention for one of its members, Martha Wilson, publicly resigning in protest. The panel’s limited influence over decisions made by the Boulder Police Chief in response to policy breaches by police officers, as well as lack of fair legal representation of panel members, are the reasons for Wilson’s resignation.

Once again, the Police Oversight Panel is met with controversy as pro-police advocacy groups, including Safer Boulder and the Boulder Police Foundation, scrutinize candidates who have yet to be appointed to the panel. This pushback is an additional obstacle for the citizens and civil rights activists hoping to see significant police reform in Boulder, where the City has paid out millions of dollars in lawsuits since 2020.

The Boulder Police Foundation raises funds to support the Boulder Police Department. Safer Boulder is a citizen’s group advocating for public safety in Boulder, according to their website, but have had numerous exposes written about them by Boulder Weekly and the Boulder Beat, stemming from a Twitter account and website called Safer Boulder Leaks. Lead Now Boulder is a citizen group that aims to hold local leadership accountable, according to their Twitter, which some believe is a rebranding of Safer Boulder.

After seeing the names of potential candidates for the POP (the Police Oversight Panel), pro-police advocates began to express fears, including the “further breakdown of our criminal justice system here in Boulder,” according to emails provided via CORA request from residents and political activist Eric Budd. Budd is heavily involved in local politics by supporting candidates running for elections and running campaigns around issues of housing, policing, and social justice. He also ran for Boulder City Council in 2017.

Curiously, a CORA public records request returned emails between private individuals Leslie Chandler, Russ Chandler, and Scott Schaefer. Mr. Chandler and Scott Schaefer, both members of the Boulder Police Foundation, received an email from Ms. Chandler, an active member of Safer Boulder, on Dec.15th, 2022, the day the City Council met to consider new panelists for the POP. The email expressed the urgent need to address the potential appointment of Lisa Sweeney-Miran. Sweeny-Miran is the vice president of the Boulder Valley Board of Education and executive director of two shelters serving unhoused populations in Boulder.

Beyond breaking down the criminal justice system, Ms. Chandler also fears Chief Herold will resign if Sweeney-Miran is appointed to the Boulder Oversight Panel. The fears stem from Sweeny-Miran’s left-aligned politics and civil rights activism advocating for unhoused populations, which involved her in a lawsuit against Chief Herold and the City of Boulder.

Some citizens and City Council members echoed the concerns of these police advocate groups during the Dec.15th, 2022 City Council meeting, forcing a delayed decision on adding five new members to the POP.

Budd is concerned that if police advocacy groups are deciding who gets to serve on the oversight panel, the panel will not be able to effectively do its intended oversight job. This is essentially the same reason why Wilson resigned, lack of effective oversight.

“It’s inappropriate for the police to be having a significant influence on who is their oversight,” Budd said. Organizations like the Boulder Police Foundation and Safer Boulder have direct relationships with Chief Herold and the Boulder Police Department. 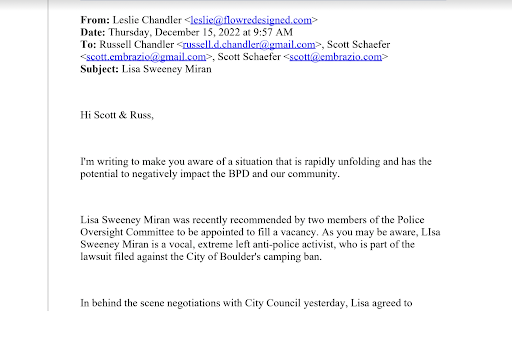 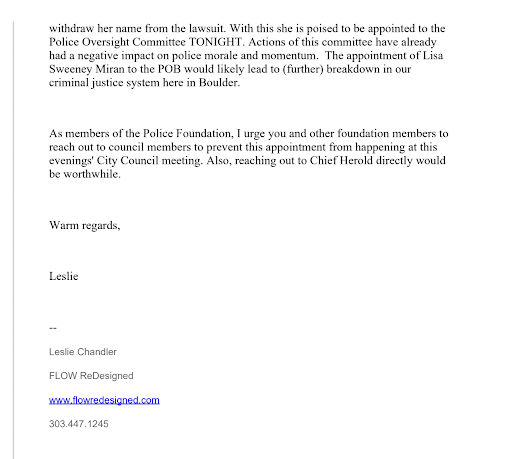 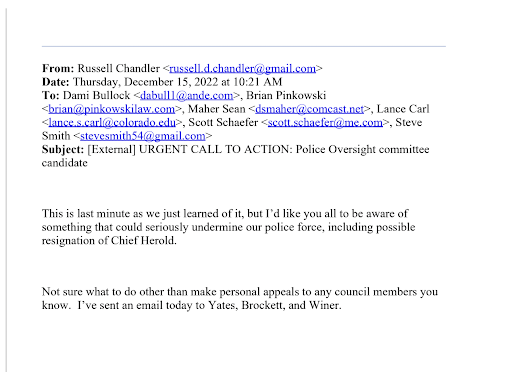 Emails from Leslie Chandler to members of the Boulder Police Foundation expressing concern over the Dec.15th, 2022, meeting in which Lisa Sweeney-Miran was being considered for an appointment to the Boulder Police Oversight Panel. This Record was obtained by Eric Budd through a public records request.

The email was included in Mr. Budd’s original CORA because the Chief Herold was BCC’d on the email. Mrs. Chandler was privy to, in her own words, “behind-the-scenes negotiations with the City Council” regarding an appointment that is supposed to be conducted in private. It is also unclear why the email between Mr. & Mrs. Chandler and Mr. Schaefer was uncovered during a public CORA request, as no government officials are visible on that email chain.

Community members like NAACP Boulder County Branch’s Criminal Justice Chair and Attorney Darren O’Connor believe that the inclusion of the public in the panel’s deliberation stage opens the door for groups closely associated with the police to influence the panel’s decision. Police Oversight Ordinance No. 8430 section 2-11-6 (5)  states, “selection panel deliberations shall be confidential.”

Lack of effective oversight is especially important with a department like Boulder Police which have paid out millions in lawsuits regarding excessive force and racial injustice.

During the Dec.15, 2022, meeting, citizens and City Council members Junie Joseph and Bob Yates referenced emails sent from community members expressing concern over Sweeney-Miran’s possible appointment. They vocalized community reservations specifically around Sweeney-Miran’s involvement with the American Civil Liberties Union of Colorado lawsuit against police Chief Herold for the city’s camping ban, which allowed the police to ticket unhoused people for using blankets or tents. Police advocacy groups have also used Sweeney-Miran’s social media posts as another potential conflict of interest to her service on the POP, however, Sweeney-Miran doesn’t think the opposition from pro-police groups are stemming from her left-aligned Twitter posts or her involvement with the lawsuit.

“Twice the Police Oversight Panel has decided which candidate it desired,” City Council member Junie Joseph wrote to YS in an email. “They know the process and have decided. Consequently, twice they have deemed Ms. Sweeney-Miran fit to serve. I do see and acknowledge that Ms. Sweeney-Miran has made comments on her Twitter page that some may have deemed inappropriate but she also has a constitutional right to express herself and contribute/lend her voice to issues in the community. Further, I think it is important to have varying voices in a community who challenges all of us. I hope that moving forward, the challenges are more constructive and seek to resolve the issues for the betterment of the community, especially on the Panel.”

YS also reached out to Bob Yates for comment regarding his individual stance on Sweeney-Miran’s appointment but has not received a response as of press time.

Sweeney-Miran is an executive director at Mother House and The Lodge Emergency Shelter Program, serving unhoused people in Boulder. Among her goals in working with this population is that everyone has shared spaces that are welcomed in the Boulder community, regardless of the money people have in their pockets.

“At my core, I believe that Boulder is a place that belongs to anybody who’s here.” Sweeney-Miran states. “It doesn’t require you to live in a $2 million home to be a part of our community. The people who have the least and who are the most vulnerable are treated with the most vitriol and hatred, and fear. I understand that some of these folks, Safer Boulder in particular, have always been upset about it.” Sweeny expands on their efforts to oppose her work, “every time there is an opportunity to challenge me publicly in any way they do. And this is their newest opportunity.”

If the City Council decides to deny candidates like Sweeney-Miran at their next meeting on Jan. 19th, 2023, Sweeney-Miran thinks this will send a clear message.

“I think that would be a clear statement that the most important voices in police oversight are the Police Foundation,” Sweeney-Miran said. “Council supports the POP. They formed the POP because of the concerns they had around the Zayd Atkinson incident. I know that this is a council that cares very deeply about social justice, so I’m counting on them”

Sweeney-Miran believes that her hopes for police reform mirror other reform efforts happening in Boulder. Programs like The Crisis Intervention Response Team, a co-response team approved by the City Council, composed of licensed behavioral health clinicians who are Housing and Human Services employees embedded in the Boulder Police Department, now handle calls to the police involving behavioral and mental health episodes.

Sweeney-Miran’s posts on Twitter echo this movement toward a shift in policing.

“What do we look at when we look at the future of policing?” Sweeney-Miran asks. “What is the best way that a healthy society can move forward so that everybody gets the help they need when they’re in a crisis situation? Sometimes that might be the police. Sometimes it might not”

Sweeney-Miran received pushback from Safer Boulder about retweeting a post about Keenan Anderson, a beloved Black English teacher who was killed by the LAPD after flagging them down for help following a car accident. The Lead Now Boulder Twitter account is run by Kate Lacroix, who is associated with Safer Boulder, according to Sweeney-Miran.

“These are pervasive concerns, not just citywide, or community-wide, but nationwide,” Sweeney-Miran said regarding the killing and brutality of Black and Brown people by police. “These are the center of the conversations most of us are having. And center the conversations we’ve been having here in Boulder.”

She points to BPD initiatives like the Reimagine Policing plan, which share the sentiment that changes need to be made in policing in the midst of local and national discussion.

“The Reimagine Policing planning process will provide a framework for the department to do a broader and more in-depth examination of community input, use data-driven strategies to review current operations in the context of changing conditions, and determine future policing goals and strategies,” according to the project overview.

Sweeney-Miran will not delete the posts on her social media showing concern for police brutality and bias or stop advocating for unhoused populations, she said. 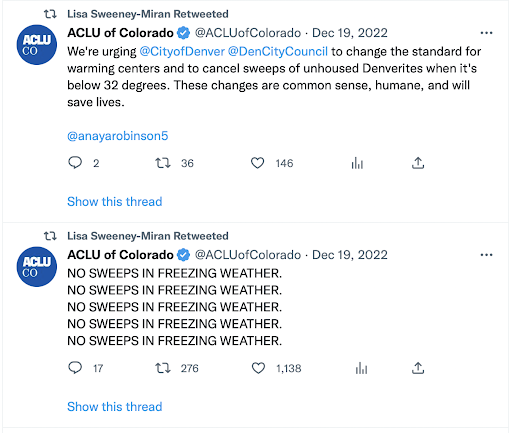 Screenshots of a tweet retweeted by Sweeny-Miran advocating for no police sweeps of unhoused populations, especially in freezing weather.

The unhoused populations Sweeney-Miran works with share with her their experiences with police. “The most heartbreaking is that there are people across this city afraid to call the cops if they’ve been the victim of a crime because they’re not sure what’s going to happen to them,” Sweeney-Miran said. “If you’re a person of color, if you’re homeless, if you’re transgender, if you’re all three, even if you’re the person who’s been victimized, if you’re the person who calls the police, you’re not sure what’s going to happen.”

Sweeney-Miran contemplates who Safer Boulder and the Boulder Police Foundation would view as perfect candidates for the oversight panel. The panelists typically devote 20 to 40 hours a week and receive financial compensation equalling about $150 to $200, Sweeney-Miran said.

“We all have opinions,” Sweeney-Miran said. “If there really is a person who has literally no opinions of any kind or no interest in policing, then they obviously wouldn’t choose to spend their time working on this panel.”

According to Sweeney-Miran, prior to the City Council meeting on Dec.15th, 2023, she was the only candidate being questioned by City Council and pro-police advocacy groups. Now another POP candidate, Sam Zhang, is receiving pushback as well. Safer Boulder sent emails sent to City Council expressing concerns around police responses to mental health crises and the possibility of reallocating funds to alternative responder programs in some situations, she said. 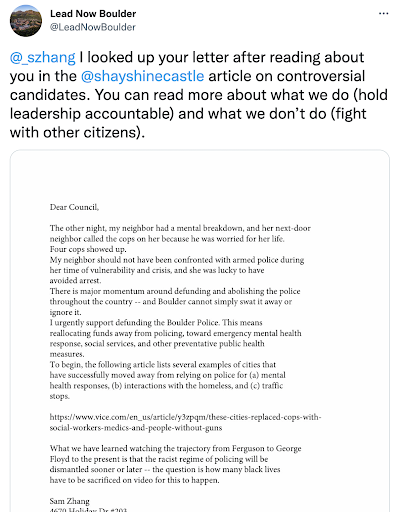 YS reached out to Safer Boulder for comment and did not receive a reply. YS was unable to reach out to the Boulder Police Foundation as their website was non-operational at the time.