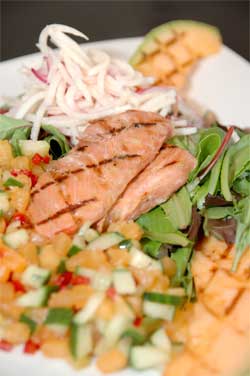 You’d be hard-pressed to find a chef having more fun these days than Liane Whelpdale. The head chef and general manager at the tony new Orchard eatery, Mexico Cantina y Cocina, has playful aspirations of being featured on a Food Network one day. So she jumped at our challenge, using this month’s ingredient, cantaloupe, to make two menu items. We returned 24 hours after surprising her with the fruit, treated to Cantaloupe Margarita Grilled Salmon Salad with a Cantaloupe Margarita at its side.

It’s likely Rocky Ford, Colorado, would be nothing more than a dusty eastern plains settlement if it weren’t for its extra fancy status cantaloupes. Those melons have certainly put the small community on the map.
There must be something in the water, or the soil for that matter, as the melons produced in the Arkansas Valley average an astounding 12 percent sugar level.

Needles to say, they are super tasty and in season right now. How one would relate to upscale Mexican cuisine remained a big unknown.

Liane Whelpdale, the zesty GM and head chef of Mexico Cantina y Cocina, seemed up for the challenge, even cracking a cheesy joke when we offered her this month’s ingredient.

“You can get married, but you Cant-A-Loupe.”

Having worked in the ever-so-creative kitchen of Boulder’s Zolo Grill (one among many stints at local restaurants), Whelpdale learned to experiment with wild flavor combinations early on in her career, which
served her well in this challenge.

Her dish starts with three large slices of cantaloupe grilled to a perfect sear.

Next comes the relish, a salsa side that includes diced cantaloupe, cucumber and Fresno peppers for bite. The salad is tossed in a cumin vinegar that serves as a stark, tangy flavor contrast to the fruit. There’s a jicama slaw served atop that, which is another flavor component that offers an interesting juxtaposition of taste from bite to bite.

It’s topped with the salmon, a flakey grilled version of the fish with a twist—its marinade is the Cantaloupe Margarita. This gives the salmon a subtle sweetness, and kicks any fishy flavor to the curb. Before you knock a margarita marinade, taste it.

The margarita itself is a take-off on the restaurant’s recipe. No sweet and sour, just lime, agave nectar, triple sec and tequila, mixed with crushed cantaloupe chunks. It’s a refreshing take on the Mexican classic.
Which is a common theme on the menu, this new item notwithstanding.