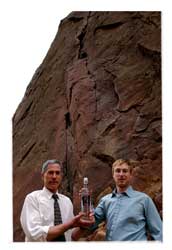 Matthew Baris is to the hard stuff what Charlie Papazian is to beer. When President Jimmy Carter made brewing beer at home legal in 1978, it opened the creative and entrepreneurial floodgates for the astounding variety and quality of craft brewed beer that many take for granted.

But as commercial and homebrewers alike hit their stride, it was inevitable that the do-it-yourself crowd would begin cooking—distilling—their homemade products. But homebrewers, meadmakers and moonshiners beware, making your own hooch at home is still illegal.

That’s why startups like Boulder’s Altitude Spirits, producers of Vodka 14, are a novelty. But for those who take the plunge, as the father-son team of Mitch and Matthew Baris did with Altitude, the results can be satisfying and enlightening.

Encouraged by the growing number of specialty distillers in Colorado producing everything from bourbon and brandy to gin and grappa, Matthew Baris decided to get in the game with vodka.

“I wanted to make something special, something that stood out,” Baris says.
That something was Vodka 14. Made with pure Rocky Mountain water and certified organic grain, Vodka 14 is named for the towering 14,000-foot peaks that make Colorado special.

Using top-shelf organic ingredients—with a “USDA Organic” certification on the bottle—isn’t just about wearing a badge of quality. It reflects the philosophy of the business, its local roots, and the Baris’ desire to be good stewards of the environment and community. Portions of the company’s profits are donated to a laundry list of charitable organizations ranging from the American Red Cross to the Boulder Shelter for the Homeless.

“To the extent we are successful, we want to share that success with the community,” Baris says.

But using impeccable ingredients was only the beginning. Baris kicked his liquor up a notch by using a continuous distillation method that involves heating the mash continuously and letting the alcohol condense and then vaporize again. And again and again. When the alcohol has put considerable distance between itself and the mash, it is then filtered and bottled.

At present, Baris is focusing on serving the local market of the metro area and select Colorado resort towns. With production running about 150 cases a month, give or take a couple of dozen, don’t look for a nationwide distribution anytime soon.

The idea of starting a distillery seemed to come out of nowhere, but after telling his dad about it, he realized it might
be genetic.

“My great-great-grandfather made vodka for friends and family in Russia,” Baris says. “Not a lot, just small batches.”

Producing the modern version is a family affair with Matthew’s dad, Mitch, handling production and quality control and mom, a CPA, handling the books. But unlike the national brands that produce millions of cases annually and have marketing budgets to match, Baris says he’s content with letting people discover the crisp, clean, pure flavor for themselves. To be sure, the silver medals in 2006 and 2007 at the San Francisco World Spirits Competition don’t hurt. And neither do the head-to-head taste tests in which judges unanimously preferred Vodka 14 over Ketel One.

But just as you can get a great India Pale Ale distributed by a national craft brewer but pick the version on tap at your local brew pub, Baris is counting on locals choosing a hometown product.

“We think it’s one of the best, but there’s so much more to it,” Baris says. “We are rooted in the community. When you choose Vodka 14, you’re not just choosing quality, you’re also choosing to support local organizations and a local company that reflects local values.”

[Vodka 14] For information on where to buy and a few great drink recipes, visit its website.