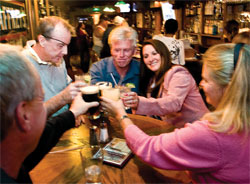 One of my most prized possessions is a framed Norman Douglas quote done by my mom in simple needlepoint. It hangs in the kitchen and reads: “Many a man who thinks to have found a home discovers that he has merely opened a tavern for his friends.”

In the case of the Niwot Tavern, the reverse is true.

Taverns, by their nature, are places filled with personality and comfort; like a good pair of shoes that keep getting better every time you put them on. The same is true of the Niwot Tavern.

First time visitors are greeted as such with the usual questions of “where’re you from?” and “what do you do?” and “what’ll you have?” But keep coming back, and in addition to calling you by name, they’re as likely to ask about the movie you talked about going to see last time you were in.

The one usually doing the asking is the frenetically friendly bartender, Jay. The longtime Snowmass denizen is good for a chat, but only when he’s not busy making drinks or pulling draughts, which he does with crisp promptness. Work comes first, which is a good thing for we, the thirsty.

Also, a proper tavern isn’t too big, has classics on tap (served up on a handsome hardwood bar) and offers hearty fare. Bass, Harp and Guinness—in addition to a handful of seasonal offerings—more than cover the tap beer, not to mention some fine Single Malt Scotches for that industrial strength bone-warming.

Put a dozen people in the bar of the Tavern—which runs along the dining room—and it’s nearly full. You can squeeze maybe  two dozen before it’s packed. Weather permitting there is plenty of overflow space on the small patio out front, but the primary social action is indoors. That’s where you can watch local sports teams battle it out on one of the three plasmas or check scores on your laptop thanks to free wifi. But don’t mistake this for a sports bar. You’re just as likely to find a Niwotian like Jim at the bar tucking into a salad, a beer and a book as you are a Red Sox fan clutching a Black and Tan, praying fervently for the miracles to continue.

And while the booze and people are all top shelf, as Beth and Lisa confirmed after letting me interrupt their conversation about maybe moving up to Breckenridge to ski, it’s all about the food.

“When in doubt, get the special,” Beth says. “It’s always good. But so is everything else on the menu.”

And that’s not an exaggeration. With Culinary Institute of America grad David Gray manning the pans, this is one tavern whose food will give mom’s best home cooking a run for its money.

As pubs go, the Niwot Tavern truly sets the standard with its great food, comfy atmosphere and friendly people. And I’m kind of glad I don’t live within walking distance, or that it doesn’t have a fireplace and an overstuffed couch.