Yes, I Can Hear You Now 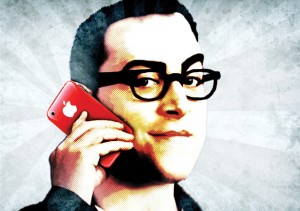 This old adage should be embossed in steel and mounted on the offices of every major corporation in the world, and none sooner than the walls of AT&T.

On Jan. 11, Verizon announced it will begin carrying the ubiquitous iPhone on its network by the time you read this column. The ripple effect of this announcement may be one of the largest such events in cellular telecommunications history.

That may sound like an unreasonable charge, but mark my words, the shakeup will be huge, and, in good capitalistic tradition, should benefit the consumer.

AT&T has had a stranglehold on the biggest game-changing device in mobile communications and computing in history since the iPhone launched in 2007. True to Apple’s form, the company clung to a locked-down, one-network approach as long as it could, but in 2010, Android phones edged past iPhones for the first time in gross sales.

Apple’s draconian, share-nothing-with-anyone product management has long been a marketplace weakness it could overcome by being, well, really, really good at design. Ironically, the Achilles heel in this approach appears to have turned out to be the one time it truly partners externally, and AT&T’s subpar voice network and lackluster 3G data speeds forced Apple to admit it was time to open the gates to a new player.

Enter Verizon. As an iPhone user, I’ve bemoaned the dropped call issues of AT&T network, and stayed only because I’m so in love with the device and not keen on unlocking or jailbreaking and voiding my warranty.

Verizon’s entry into the arena signals a slew of changes on the wind:
Pricing: Competition breeds better prices, and while the cost of the iPhones themselves may not budge much, associated usage and data charges will. Both companies will have to adjust to stay competitive, perhaps with huge breaks for longer contract terms.

Networks: Although no one knows how the iPhone will perform on Verizon’s network, anecdotally, the situation looks good. The Verizon customers I know never complain about dropped calls. If that trend continues, AT&T is gonna have to look at infrastructure. And it may be too late for that.

Other competition: As long as AT&T remained the only carrier with the iPhone, all other, smaller companies such as Sprint and T-Mobile survived on an equal playing field. But a lot of customers have been sitting on those networks, simply waiting for the iPhone to move to someone “other” than AT&T, such was their disdain for the goliath carrier. With the iPhone now on another network, a large, if not mass, exodus from these tertiary carriers is not unlikely.

Android killer?: There’s a strong segment of the Android market who use Android phones because they couldn’t (or rather, wouldn’t) get their hands on an iPhone while it was on AT&T. Now that it’s on Verizon, this may be the knockout punch Apple wanted to deal to Google’s open-sourced phone.

As with anything, time will tell. It’ll be another year and a half before we know the impact; the iPhone 4 was released in June of 2010, which means AT&T’s contracts will start expiring in the summer of 2012. Who knows? By then, AT&T may have figured out how to resolve connectivity and press issues. Because even when it’s bad news…