Love is on Tap in February 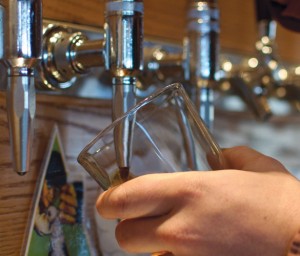 As local beer events go, you can’t do much better than Mountain Sun’s 18th Annual Stout Month. I like my dark beers year round, but some find the robust flavor and hearty strength of a stout especially appealing while caught in the icy clutches of winter.

Well, February is for you, stout lovers. The Mountain Sun and Southern Sun brew pubs—and Vine Street Pub in Denver, too, this year—are loading their taps with black gold and you will not be disappointed. Back again are perennial favorites Yonder Mountain, Thunder Head and Cherry Dip stouts (the latter made with a prodigious helping of sweet cherry puree). Head brewer Brian Hutchinson also concocted four imperial stouts (with alcohol by volume contents in the 8 to 11 percent range): Usurper, Addiction Coffee and two versions of the deliciously viscous Nihilist—classic (at 9 percent ABV) and a bourbon barrel-aged version.

But be sure to check in at Mountain Sun’s website for the day and time so you can be on hand for the tapping of the various vintages of Avery Brewing’s Czar Imperial Stout. Mountain Sun Proprietor Kevin Daly has several kegs of this potent potion from vintages that go back years stashed in cold storage just waiting for their annual tasting. The event only lasts one night, so don’t miss it.

Ted Palmer, owner of Roundhouse Spirits, tucked in a warehouse northwest of Arapahoe Avenue and 55th Street in Boulder, will soon own a 20-barrel brewing system. With it, he will be able to make his own wash (fermented wort from corn) that will get distilled in his 130-gallon hand-hammered copper still from Hoga Company. This beautiful piece of art cranks out an ever-growing number of cases of his award-winning flagship gin; a spicy mix of juniper, star anise, licorice and a handful of distinct yet subtle spices. “My grandpa made moonshine in a copper still, so I’m following in his footsteps,” said the Siebel Brewing Academy graduate. “We’re anticipating 200 percent growth in 2011 and, hopefully, for the next three, four or five years.” In addition to gin and a delicious Corretto coffee liqueur (made with Unseen Bean coffee), Palmer will add an organic Blue Agave spirit (don’t call it tequila unless it’s made in or near Tequila, Jalisco) to his offerings.

If flavored vodka doesn’t measure up, roll over to Steve Viezbicke’s 303 Vodka man cave, 2500 47th St. in Boulder. This tasting room offers a lot more than vodka. Among the delectables the Viezbickes (the operation is a family affair) soak in their spirits are peppermint sticks, vanilla beans, coconut, horseradish, blackberries/cucumbers, pineapple/jalapeno peppers and pickles. Yes, pickles. If you’ve never tasted a “Pickletini,” you haven’t lived. “(Our infusions) are from the heart; it’s not fake,” said wife and CEO Terri Viezbicke. “We just do what tastes good.”