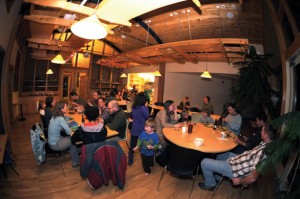 If it takes a village to raise a child, it takes a neighborhood to nurture an adult.

As the heart of the Holiday neighborhood in north Boulder, the Wild Sage common house kitchen and dining area feeds any number of its 34 families and their neighbors about three times a week and brings residents together to celebrate events, support one another and manage their neighborhood.

Linda Tate moved to Wild Sage, one of Boulder’s four cohousing communities, in 2006, and married Jim Rebman in the Wild Sage common house in 2007.

“The common house is a sacred space for me because we got married here,” said Linda Tate, a writer for corporate and non-profit communications and marketing. “Then we had the dinner and reception in the common house, spilling out onto the green. It’s hard to put into words what’s it’s like to every day walk past the spot where you got married.”

She said the Wild Sage community came together as “team hitch” to hold the wedding and theirs was the first announcement on the Holiday sign since the theater closed.

“It was a real community event,” she said.

Around 2000, Holiday began its transformation from the former home of a drive-in theater to a site of roughly 330 Habitat for Humanity, Boulder Housing Partners, Affordable Housing Alliance and market-rate homes. Now, the bulk of the units have been sold, and the neighborhood is raising its family around common houses with well-used community kitchens, dining rooms, craft areas, living rooms, spare bedrooms, a hot tub and even yoga rooms.

Architect Bryan Bowen, owner of Bryan Bowen Architects, designed and built the Wild Sage common house for Jim Logan Architects. The idea of an intentional, shared community engaged people from the beginning, building momentum for the overall Holiday project, which is finished with the exception of two lots that will be Habitat homes, Bowen said.

“We’re eating here at the common house between two and three times a week right now and one of those meals is typically cooked in the common house,” he said. “There’s a high level of casual usage. People are using the wood shop or hot tub or the exercise yoga room, or they’re coming in to do guitar night in the family room downstairs or watch a movie on the big screen, all kinds of little things.”

“So when your mom comes to visit, she can stay there, which gives you a comfortable amount of elbow room,” Bowen said.

This is especially true for those community members who live in the neighborhood’s economically sized, densely placed housing units, including Bowen. Boulder Housing Partners received a density bonus for building an average of 20 dwelling units per acre, after the roads are taken from the calculation. Forty percent of the homes are considered affordable through sweat equity, reduced rate, subsidies by the City of Boulder, or Habitat home programs.

“Sharing resources is hard to quantify, but a very big piece of sustainability,” he said.

This makes the neighborhood more sustainable over time, he said, as does proximity to public transportation and its accessibility to bikes.

“(BHP) took each block and they gave it to a local developer who they felt was a good, trustable partner,” Bowen said. “Everything was based on this new sort of new urbanist street scape and having a lot of mixed use, and they wanted to have a lot of local, community things happening here.”

Willa Johnson, a project manager with Boulder Housing Partners for the Holiday neighborhood from 2001 to 2005, said the plans were for a mixed use neighborhood, with attention to details such as the neighborhood park, revamping the old Holiday sign, and designing Holiday Drive around the old theater speaker system.

“(Holiday) was a 27-acre site that was kind of in an anvil shape,” Johnson said. “We purchased the land and took it through a master planning process and made commitments around how much affordable housing we were going to provide and designed guidelines on what kind of community we wanted to create.”

Following the initial planning stage, BHP hired developers to prepare lots, and individual contractors to develop their own portions of Holiday.

“When you walk through the neighborhood, there’s sort of a lot of variety because it’s a lot of different architects, different developers,” Johnson said. “Frankly, a busy level of variety.”

Then BHP bought 50 units for affordable rental housing, which are scattered throughout the neighborhood, she said.

She said Holiday includes 10 units that serve people who were formerly homeless, which are deeply service enriched with caseworkers and rent control. The lowest income population is served through the rental program.

“Then (it’s) all the way up to the single-family houses that are half a million or more,” Johnson said.

In that rainbow of housing options, roughly 100 units are affordable-home ownership, followed by market-rate condos and then market-rate, single-family homes, she said.

The Affordable Housing Alliance uses sweat equity to bring affordable homes to the area. Within Wild Sage, there are four Habitat homes in a multi-family building that were built in concurrence with the surrounding homes with the assistance of the general contractor, Bowen said.

Tate praised the community for being an intentional form of communal living, for initiating and managing any changes to its community’s lifestyle. As active community members, Tate and Rebman, one of the first home owners in Wild Sage and a member of the HOA board, organize, do computer work and write for community events, members and organizations.

“I think of it as a condo association meets a commune,” she said. “You have an HOA, but it’s an intentional community, so everybody is working together. There is no property management company. There is no ‘them’ doing the work of running the community. We run the community.”

She said cohousing is a perfect fit for she and her husband, who work from home. Cohousing is intimate and familial, an environment she thrives in, she said. Her husband, a blind software tester, lived and worked out of his home in Wild Sage before Tate came to live with him.

“You get married in this place,” Tate said. “We’ve had home births. (Bowen’s) second child was a home birth. We haven’t had any residents pass away yet, but that’s inevitable. There have been people with great illnesses, and it’s intimate. We’re in each other’s homes. We take care of each other. It wouldn’t be for everybody to have an extended family of 34 households.”

The cohousing planners and early buyers were the first in, with a vision of the community and a commitment to living in the area, Johnson said. They continue to actively participate in the community, volunteering on boards, committees and associations to maintain the site.

“We created a homeowner’s association that governs the entire neighborhood and they do Eco Passes for the neighborhood, they do movies in the park, they maintain elements of the sight that are held in common,” Johnson said. “The cohousing folks have been really gracious to lead those initiatives and volunteer on the board to be particularly engaged and set a great example.”

The Holiday community took roughly 10 to 15 years to complete, from idea to construction. The Holiday cohousing communities were planned around the common houses and the idea of the third place, Bowen said.

“It was going to be where people gathered,” he said. “Everyone has a home and their work, and the third place has to be something that satisfies you in other ways aside from those first two places. It could be a church or a neighborhood bar or your yoga studio, but now a lot of people have the common house as their third place.”

Tate described the common house as exactly that.

“Ninety-nine percent of my social life is this community,” she said. “I never get tired of my neighbors.”