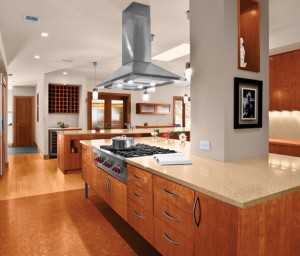 In their stop and go life of globetrotting, raising children and business successes, a natural flow shaped the space around two north Boulder homeowners.

The bulk of their remodel revolved around the kitchen and entryway, which are adjacent to the courtyard tucked into the U-shaped curve of the house, making the area a central location for the couple’s visitors. Their artwork, however, wanted for a more understated design before Barrett Studio Architects cleaned house.

“They found this house,” said project manager Callan Childs. “They fell in love with the location and the property…but the house felt very chopped up.”

“As large as the spaces were, they weren’t very functional and they felt very closed off and there wasn’t a lot of connection between rooms,” Childs said. “What they wanted was to be able to have this visual connection between the different spaces they would occupy. He’s got an area that’s more his realm and she’s got an area that’s more her realm, but we wanted to still open them up to each other because they wanted to still be around each other quite a bit.”

The 750-square-foot kitchen presented options because the bulk of the dividing walls and counters could be and were removed. New, consistent countertop heights created a straightforward workspace and design that could be enhanced with less disruptive architectural elements.

One of these special areas, a column that serves as a vertical centerpiece in the largely horizontal kitchen, was structural but presented a fun challenge to Barrett’s designers, who used voids to create a bookshelf and art space on opposing sides of the column.

“You turn it into something that becomes a statement piece and a practical, useful piece, too,” Childs said.

The designers used a lower countertop at the back of the kitchen to hide office-space messes from kitchen visitors, but workspace in the kitchen is level and accessible, said Maggie Flickinger, business director.

“She can have tons of papers and books and things like that on her office work surface and you can’t see that work surface from the kitchen,” Flickinger said.

This also leaves an entire back window free from being blocked by office furniture, she said.

The kitchen presented two areas, a workspace with inlaid cork and a living, food prep and entertaining space.

“To this day she tells me she uses all of the spaces,” Childs said. “It’s large, but they utilize it all, which is great.”

“We tried to work with as many sustainable materials as possible,” Childs said. “I think the fact that they’re European helped, especially with their age, bringing that green, sustainable sensibility from the client side into the project. It’s been part of their culture for so much longer.”