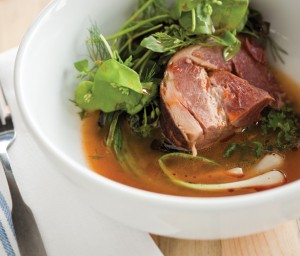 I’ve heard the food at The Pinyon in Boulder described as “casual comfort food,” but I think that undermines what chef Theo Adley is doing, in a way. Certainly, there are no white tablecloths here, but that might be because they would cover up the lovely hand-crafted tables made from Colorado beetle-kill pine.

The decorations do consist of mason jars filled with pickles and live herbs, but they are actually storage for ingredients used in the kitchen, not mere country kitsch. And while the menu certainly revolves around dishes that evoke long, lazy Sunday suppers, comfort foods our grandmothers might have made to feed a hungry after-church crowd, the plates themselves are by no means casual in execution. Every detail has been considered, every ingredient thoughtfully sourced and carefully chosen.

We started our supper with two of the evening’s specials: a fresh green salad, simply prepared and dressed, and the day’s soup, a fresh tomato basil. The tables at The Pinyon are placed close enough together that some of the two-tops must be moved for guests to reach the banquette seats, but the effect was more charming than crowded, reminding us of the way cafés in Paris squeeze as many seats into their cozy spaces as possible. We ordered the selection of house-made breads and jam with cultured Vermont butter alongside our first course and delighted in tasting each of the excellent varieties presented, which included an English muffin-type bread, a slice studded with dried fruit and nuts, and a warm sourdough.

Although greatly tempted by the night’s specials (a grilled fish and a braised pork shoulder), we decided to order off the standard menu. My companion ordered the smoked pork shoulder, served with escarole, lemon confit and fennel pollen. The meat had a glorious depth of flavor from a slow smoking and benefited from the bright contrasts of the lemon and fennel, which helped to lighten what might otherwise have been an overly heavy dish. I, of course, had to go with the fried chicken, about which many have waxed poetic (including in these very pages). To say it was delicious would be putting it mildly, but more importantly, it was expertly done. Despite being “comfort food” and a mainstay of fast-food drive-throughs, truly good fried chicken is tricky business. There’s the ratio of crust to meat to consider, the seasonings in the batter, the length of frying to produce the perfect crunch without burning; The Pinyon’s version excelled in every category. Not being a huge fan of the chicken and waffles idea, I was underwhelmed by the scallion pancake and accompanying syrup. Though appetizing, they just weren’t my cup of tea. I wanted to focus solely on the chicken, unadulterated. In the future, I might choose to order a vegetable on the side to round out the plate.

“Comfort food” has become the description du jour for many new American restaurants struggling to explain their style: taking the familiar and turning it on its ear with new preparations and fancy flavor fusions. The Pinyon doesn’t need showy preparations or exotic ingredients to impress. It eschews that trend, focusing on taking familiar dishes and perfecting them, not making them flashy or new, but finding the perfect recipes and ingredients to make their flavors soar.