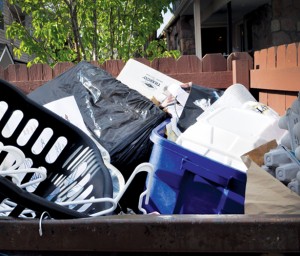 Freecycle: To recycle items found for free-generally in trash facilities, on curbs or back alleys

Freegan: Those who participate in the conventional economy on a limited basis, minimally consuming resources.

Freeganism: An anti-consumerist life-style embracing off-the-grid consumption techniques to make use of other wise wasted resources and avoid the conventional economy.

Garbologist: One who specializes in trash picking for food, clothes and other consumer products.

Rehome: Just like with pets, finding a home for unwanted items to keep them out of landfills.

When transients move out, they rarely rehome plastics and appliances, which is a real problem in communities with students and service members, whose first thoughts are moving on, not what they leave behind. Still, CU labels its trash as “landfill,” and Naropa banned plastic bottles from campus, so I wondered if the Boulder community would break the waste-filled mold during spring-cleaning season.

The problem, I discovered, isn’t at all exclusive to the end of the school year—it’s just intensified. Whether we do it to avoid inconvenience or to avoid giving away what could have brought in a profit, Boulder County’s waste is typical and problematic.

The university brings in extra mobile garbage bins at the end of the school year, so I went to town and dubbed graduation weekend my Freecycle Paloozalah (Feel free to adopt the holiday; it’s non-denominational). Admittedly, I needed a toaster and just couldn’t see the point in paying for one when I knew some Pop-Tart addict would leave me one.

More importantly, I was curious.

Without actually stepping in refuse juice—you’d really have to try to get to the bottom of most trash receptacles—I freecycled two clean, super sturdy laundry hampers, about two dozen white hangers that match my own, a pair of like-new Ugg-style boots and an unstained, odorless couch…in two hours on my first run. And someone came a few of my morals short of losing a brand new cooler full of iced-down beer. Who leaves that outside of an overflowing garbage bin?

Although I burned my armpit a little reaching inside, I didn’t break Boulder’s laws against actually standing in CU’s special trash containers. (Which, for the record, have ladders to make it easier to hang off of the outside and reach in, just wear long sleeves.)

What gives? It’s mostly laziness, but selfishness, too—if residents and companies can’t make a profit, too many people believe the product is better off in a landfill, said North Denver Garbologist’s founder Joy Kay, a teacher with a degree in microbiology. She uses trash picking to further her artwork and has gained gallery recognition for her pieces.

Co-workers told Kay she was stealing, that if she didn’t pay for this trash, it wasn’t legally hers to take. To them, supporting businesses on the front end is the only legitimate means of consuming, and digging through “trash” is for the desperately needy.

Store owners agree: If items can’t be sold, companies typically damage them before sending them out back to go to the landfill. They rip the covers off of books, spray paint furniture and destroy clothing. And they don’t like to talk about it because it makes them look like the bad guy. We know they’re in it for the money. They know it. And that’s fine…for the most part. Is it really better for everyone, though, if the labor and materials go straight from production to landfill?

And really, is there any downside to this growing community of people rescuing perfectly good items—from food to furniture to clothing—from slow, environment-destroying waste?

As much as Kay benefits from it, she said she’d prefer the problem not exist. From her very first experience freecycling, Kay said she was stirred and disturbed.

“All of the way down to my soul and my bones, I was appalled at how much waste (I found),” she said. “I thought, this is ridiculous and shameful.”

Her best finds have included five undamaged wedding dresses perfectly packaged in a dumpster behind a bridal shop; furniture, un-expired dog treats and mukluks, and two 30-gallon trash bags full of computer software she sold online for about $5,000.

“I find a lot of amazing, salvageable materials to use,” she said.

Name the stores publicly though, and they lock their trash facilities. Why? Eateries hide behind consumer safety when they waste, but wedding dresses and educational children’s software don’t really expire. (For the record, students, neither do boots, climbing helmets and hampers.)

So until the selfishness and thoughtless consumerism changes, dig in divers. There’s something to be said about taking for free what these corporations and individuals would rather put in a landfill than share.

In Denver, back alleys see a pretty steady flow of visitors, but Kay said Boulder-area refuse is relatively untapped.

“When you go toward Boulder, there is not a lot (of diving competition), especially Longmont and Lyons; out there there’s nobody diving,” Kay said. “So you’ve got a ton of resources.”

Divers save their hard-earned money to put directly into the hands of people who produce goods ethically, Kay said. It’s a movement even my weak stomach and I can get behind.

Food divers I talked to agreed: stores in the North Metro area are less likely to worry about trash pickers filling a shopping cart with discarded pineapples to push eight miles home (true story…the police laughed and told him to return the cart). I haven’t tried food, but divers swear by its safety.

“There is a lot of enthusiasm out there for what I do, but not a lot of people out there are willing to do it,” Kay said. “In this economy, they don’t care if it comes from Walmart if it’s cheap.”

And diving into an array of trash receptacles takes considerably more time than finding the right Walmart aisle. Just be cognizant that buying products eventually creates waste. The oldest purchased item I own is a stuffed animal (in storage) from my third Christmas, and nobody wants that. So don’t buy impulsively; consider where your non-food/hygiene purchases will be in a year. If the answer isn’t within you, then you probably don’t need the product.

Personally, I’m no less comfortable in a back alley full of trash containers than at a shoe store, but it took a day of digging stuff out of garbage containers to get me there.

I wore my $3,000 camera like a shield around my neck at first. Clean, oblivious students stared when I popped out of trash containers in dirty alleys cursing about perfectly good (insert expletive here) in the garbage. I became indignant. I wanted to be on the opposite end of this waste, but don’t most Coloradans?

Nobody wants to be responsible for filling landfills, but spring-cleaning purges—graduation or otherwise—take precedence. This time of year, it’s primarily those cheap, easy-to-replace plastic bins and hangers, beds, towels and recyclables—tons and tons of recyclables.

It takes a few minutes to wash, pack, find a home for or separate it, but it just doesn’t happen. Sure, we care and occasionally feel guilty, but we’re busy, broke and singular. We think our damage as individuals is minimal. We know it adds up, but really, everyone abuses his or her “trash” can from time to time. I’m not asking all of Colorado to dive, just to consider reduction, reuse and then recycling before the trash can.

Take the clothes to a drop off, use Craigslists’ free section to get rid of stuff (I’ve seen half-used bottles of organic shampoo and dirt on there) and, for the love of God, don’t buy those ugly plastic storage drawers that fall apart when you try to move them. Even writing a quick Craigslist note that you’ve left a typewriter, old Halloween costumes and a seven-year-old couch by a trash bin in an alley can lead to less waste.

And anyone who needs a recycle bin could easily find 20 outside of student-area garbage containers, especially from May to July when leases expire.

This place gives so much to so many people, it’s not too much to give it a few minutes before giving it to the trash can. There aren’t enough garbologists to account for it all.