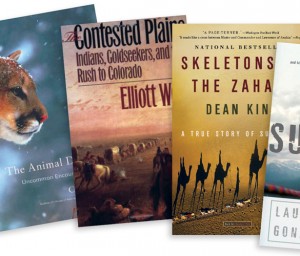 In the books below, you’ll find tales of adventure and survival, animal encounters and a history of the area we all call home. One you may want to read before heading into the wilderness; another while you’re there.

And while none of these books are new, their stories are timeless.

The Animal Dialogues: Uncommon Encounters in the Wild

From ravens and raccoons to mosquitoes and mountain lions, Childs takes you on a personal tour of wild encounters. You’ll never look at these creatures the same way again, even the seemingly familiar ones.

Childs is picnicking with friends in the Rocky Mountains.

“Never in my life had I felt such prosperity, such delightful company, when suddenly I saw a scuttling movement up my shirtsleeve,” he writes.

It’s a praying mantis. He describes how the alien-looking insects can rotate their heads 180 degrees and “tilt them side to side” almost as if they’re becoming acquainted with you. He tells you how insect brains are more complex than anyone originally thought.

Then, like a predator waiting for his prey’s complacency, Childs pounces. “The mantis is a purely anatomical killer.”

In one case, as Childs watched, the insect leaped from a flower onto a hummingbird. “It held the hummingbird with one hook as it reached out and disemboweled its victim with scissoring mandibles.”

He does admit that he was actually afraid as he and his tiny guest locked eyes. Would it lunge at him sending his wineglass flying? Childs eventually passes the bug to his wife who lets it crawl on her head, leaving a table of “recoiled” friends.

Skeletons on the Zahara

In 1815, 12 American sailors are shipwrecked off the coast of Africa. Before them: the Sahara Desert, one of the most inhuman places on earth, “dry enough to kill bacteria and mummify corpses.” With the Atlantic behind them, there is nowhere to go but inland. It’s not long before Arab nomads capture and enslave the crew forcing it on a two-month march through the desert’s dehydrated hell.

The ship’s captain, James Riley, attempts to keep his men alive, even as hostile rival tribes barter for them as commodities: “…a Christian’s worth fell somewhere between a tattered blanket and an adult camel.” Used for travel, for food, for shelter and for hydration, camels are a desert dweller’s lifeline. The desiccated sailors even favor the camel’s urine to their own.

It’s not just the sailors trying to survive. For the Arabs as well, every day in the desert is a new day, struggling for food and water, enduring suffocating sandstorms, and negotiating deadly tribal tensions. Ultimately, they are all at the mercy of the Sahara.

Riley eventually survives and writes a memoir that becomes a bestseller in its day with fans such as Abraham Lincoln, James Fenimore Cooper and Henry David Thoreau. In case you’re thinking I spoiled the ending, you’ll read about this in the preface. And anyway, this one is all about the journey.

The Contested Plains: Indians, Goldseekers, and the Rush to Colorado

After gold was discovered in Little Dry Creek in present day Englewood in 1858, folks flocked to the Front Range from all parts east. This convergence of humanity with the inhabiting Plains tribes was sure to start a fire. And it did.

In The Contested Plains, Elliott West takes readers through a social, economic, environmental and political history of the plains and Front Range from the earliest inhabitants hunting the massive Bison antiquus (think a super size Ralphie) to the American adventurers afflicted with gold fever. He shows how the introduction of horses and firearms had a profound effect on plains Indians: “Horses revolutionized warfare.” And how families endured the precarious journey overland to seek fortunes never found. And finally, how inevitably the Cheyennes, Arapahos, Comanches, Kiowas and Plains Apaches clashed with whites. West says there was “misunderstanding and paranoia” on all sides. As you walk outside of your home, you’ll look around at the land and think about the people who came before you. You’ll know Bent, Black Kettle, Left Hand and Wynkoop.

Deep Survival: Who Lives, Who Dies, and Why

How does an experienced woodsman get lost in the wilderness? Why do some people walk out of the jungle while others sit down and die? The author wants answers to these questions. So do, I think, a lot of people who venture away from the safety of our more predictable lives. In Deep Survival, Gonzales acquaints you with science, psychology and gut feeling to try to explain who lives and who dies. He guides you through an ocean of actual survival situations, some that went right and others that went deadly wrong.

In 1998, a hiker ventured backcountry in Rocky Mountain National Park. The man had survival training, was reasonably well-equipped and had brought a topo map. But after becoming separated from his partner who had the compass and who knew their route, he lost his bearings.

Gonzales says we all make mental maps of our surroundings but that the hiker’s map was for a route and destination he was not familiar with. “He did not know what was ahead of him. He could see into his past, but he had lost that vital cortical ability to perceive the world and therefore to see into his own future.”

Each literal miss-step chipped away at his confidence and reasoning ability. “The multiple stresses of weather, fatigue, altitude, dehydration, and anxiety were closing in on (his) ability to find that vital balance between useful emotion and reason.” Finally, after five days, rescuers found the man—hungry, injured and hypothermic—but alive.

In the appendix, you’re rewarded with “The Rules of Adventure,” survival advice you can use not just in the wilderness, but also at work and in relationships.