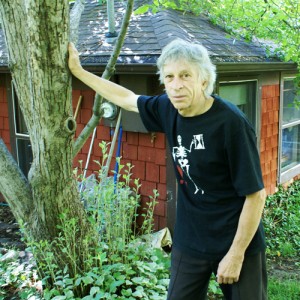 At some point in the conversation with Earl Noe, the longtime Boulderite happily describes himself as “just a ragamuffin.” That’s the way this “old hippie” is: self-deprecating yet totally content with himself and his surroundings. In his downtown home—a beautiful old thing with high ceilings and antique printing presses placed about—which he bought in the ’70s and vows to never sell or refinance, Noe lives neither in the past nor in the present. It’s his world and his timeline.

Noe is a hold out. One of the few Boulderites who came in the ’60s, who enjoyed the psychedelic drug craze and talked of revolution in The Sink, and who stayed to witness the Danish Plan, the beginning and end of traditions like the Mall Crawl, and the continued tug of war between developers, conservationists, liberals and not-as-liberal liberals. While he enjoyed almost three decades working at the post office and exploring the wild milieu nearby, Noe never sought to be much more than a contented, self-possessed Boulderite.

“I wouldn’t live anywhere else. If I’ve had a profession, it’s living in Boulder,” he said.

While Boulder has gone through some crazy shifts over the years, Noe sees it much as it was in the hippie hey-day (though, he admittedly doesn’t leave his downtown enclave very often).

A friend of Noe’s coined the term “Boulder Bozos”—meaning, the old-timers. Not the ones who have gone on to find careers, move to Erie and have 2.5 kids and a mortgage. But the ones like Noe, the ones who put down roots.

“I’ve treated it much like a refuge from the real world,” he said.

Noe’s philosophies about his Boulder lifestyle:

Noe came to Boulder in 1963, to study journalism at CU. “My grades were terrible, because it was so much fun,” he said. “Boulder seemed to be the perfect place: the setting, smoking grass, discovering the outdoors. I had all the things I needed.” So, he never left.

“There is this opportunity to get high—in the intellectual sense. When I came, I saw the outdoors as a tremendous place. A gymnasium and an art museum in one.”

On ambition: “I never did much, but I skied down a lot of things.”

On people: “Some of the most privileged people here are bitterly unhappy. I’m not sure that it was a mistake not being well-off. I’m not bitterly unhappy. It’s been that self-centric and self-involvement that helps you become content with how things are.”

On compatible development, Boulder’s house-size limits: “When they try to portray these things as ’60s, liberal wackiness, they are wrong. But in the turn of the century there were regulations on homes in Boulder.

When you live in a very desirable place, these things are inevitable. Demand is high.”

On Chief Niwot’s curse on the Boulder Valley: “I’ve always thought it was one of those Chamber of Commerce things. But personally, it’s been very true.”