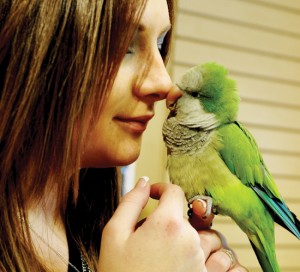 When it comes to birds, captivation is not domestication, so when parrots exhibit natural behaviors, they’re often neglected, abused or abandoned.

That’s just the tip of the iceberg for the country’s misunderstood parrots, which socialize, play and eat a surprisingly varied diet, and need regular veterinary care and groooming, said Gabriel Foundation president and founder Julie Murad.

“You wouldn’t just stick a 5-year-old kid in a cage with a ball and leave it,” she said, but bird owners are often too uneducated to know better.

Murad points to a palm-sized parrotlet and explains that providing it with veterinary care costs as much as doing so for the big, bright-eyed African gray parrot in the opposite corner. While cats and dogs are singular species, parrots world-wide occupy 353 species with hugely different needs and behaviors, she said.

Pet owners with unrealistic expectations want to pet, snuggle and touch birds, but wild parrots typically only use those behaviors in pair bonding with a mate, she said.

So Murad and her staff of 28 employees and roughly 50 volunteers work to educate the public about bird needs and behavior while rescuing and protecting the birds domestically, as well as through programs helping wild, endangered species world-wide.

“There’s no such thing as a mean bird or an antisocial bird,” said Gabriel Foundation volunteer Stephanie Losh, just those that are scared and misunderstood.

Murad and Losh marvel at how far their own educations have come, Losh’s since she came to the foundation, and Murad’s since working so hard to save her hyacinth macaw Gabriel, the only survivor from a clutch of five eggs that hatched three birds. He died at 22 months old and inspired both the Gabriel Foundation’s Denver Center and the Elizabeth Aviary and Adoption Center.

“I felt that if someone like me, who actually made it a priority, and really undertook with great passion to learn so much about the care of parrots (lost her bird), what about people who just don’t use their resources?” Murad said. “What about all of the misinformation that’s passed on to people?”

Losh said she regularly explains away misconceptions—birds can bond to anyone, not just one person; raising a baby bird does not guarantee a social, healthy bird; and parrots can’t live off of just sunflower seeds, or seeds in general—they eat fruits, beans, grains and vegetables.

Many of them spend more than just a few months at the foundation, and they talk to Losh as she walks by, some screaming excitedly and bouncing up and down, others “dancing” and saying hello and goodbye. They’re like children, vying for attention. Without a flock, space and stimulation, the birds require hours each day outside of their cages, she said.

Most captive-bred birds are only a generation or two removed from wild-caught animals from Australia, South America, Africa and Asia, even though the U.S. banned the importation of most species in 1992, Murad said. These birds are bred for coloration, not pet-like qualities the way dogs are, she said.

Tucked in a corner of the foundation’s Denver facility, a misleadingly quiet pair of salmon-pink, Moluccan cockatoos listens intently and one inclines its head when Losh talks, they were two of 42 surviving parrots rescued from cannibalizing one another in an unmaintained garage without heat or water. Cockatoos are the most commonly relinquished birds, Murad said, and the Gabriel Foundation still houses 40 of those rescued parrots among its roughly 825 birds. They often outlive their families or their family’s interest and patience, Murad said. So they land at Gabriel.

“Routine euthanasia for parrots for lack of housing and lack of places to go, like we see with cats and dogs, is not generally accepted,” she said.