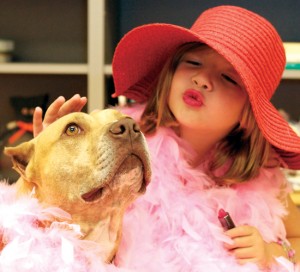 Behind the pit bulls’ sensationalistic stereotypes hide dogs like Benson, a goofy, lovable pit who greets strangers with a wet tongue and walloping tail.

“The most horrendous and Draconian breed ban in the world is in Denver,” said John Hindershot, owner and trainer at Two Bears Dog Training in Erie. “That was driven by people who were attacked by pit bulls and they blamed all pit bulls. …Political action drives breed bans, not public safety.”

Hindershot, who trains all breeds, said he believes a ban focusing solely on pit bull breeds draws attention away from the fact that any dog could attack anyone at any time.

“Every dog is a potential lethal weapon,” he said. “Every dog has the capacity to bite and will bite if the circumstances are right.”

Crystal Amarante was attacked by a pit bull—a family pet that lived with children—at a barbecue on Mother’s Day in 2004. She threw her arms around her cousin for a hug and his pit bull lunged, locking its jaws around her abdomen, she said. The dog ripped off her clothing and wouldn’t let go of her side, even with three men pulling, choking and punching it, she said. Once released, Amarante said she was in shock.

“I didn’t want to look down because it felt like my guts were spilling out,” she said.

To ensure the safety of the roughly 1,800 dogs it processes annually—and their new families—LHS gives each one, no matter the breed, a behavioral evaluation and subsequent training incorporating humans, dogs and cats, said Ott, LHS’ director of operations. After more than a decade in rescue, Ott said she disagrees with breed-specific legislation.

“Are they going to ban Labradors next because they’re biting?” Ott said. “The answer doesn’t lie in the breed ban. It’s education, it’s good pet ownership, and it’s dogs and humans training together. It’s nourishing that bond.”

Amarante said her attacker was accustomed to low-energy environments, mostly locked up in the back yard. Ott said pit bulls need constant love and attention because they become defensive and aggressive quickly when left chained up or fenced and forgotten.

Of the roughly 325 fatal dog attacks from 1982 to 2010, dogsbite.org attributes about 53 percent to pit bull breeds. The group says parents should “just say no” to combining a new situation, a “fighting dog breed” with a “hold and shake bite style,” and children.

But the Humane Society of the United States and the Centers for Disease Control, reporting the same statistics, argue no one breed is more likely to attack than another; although, it concedes pit bull and rottweiler attacks are more often fatal.

So local breed bans dating back to the 1980s force the few shelters that accept pit bulls to stay at maximum capacity.

But pit bull breeds are loyal, loving, viable pets, Ott said. She and other pit lovers ask the public to not hold every pit bull responsible for dogs that have attacked in the past.

“I can’t tell you the number of laughs I’ve gotten out of (Benson),” she said. “…Go to any shelter that has them and talk to the staff. Meet one up close and personal—just get to know one before you pass judgment.”

View all posts by Lindsay Maynard →