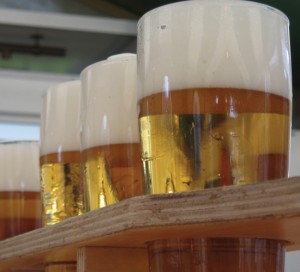 Probably the biggest beer-oriented event outside the GABF will be the Denver Oktoberfest on Larimer Street between 20th and 22nd streets Sept. 16–18 and 23–25. Craft beer icon Jim Koch, founder of Sam Adams, will kick the fest off Sept. 16, and there will be live music, food and, of course, beer from Sam Adams and cocktails from Boulder’s 303 Vodka. There are some 350,000 people expected to attend this week-long party—dubbed by Maxim magazine as the best Oktoberfest in the U.S. Enjoy non-beer related events such as a 5K race and “wiener dog” competition. oktoberfestdenver.com.

The Denver Beer Fest itself is a collection of events, tastings, food pairings and shows with beer as a uniting theme. If you want to see what makes a brewery tick, check out a tour of your favorite craft brewer or of the massive Coors facility in Golden. If you’re interested in meeting the minds behind your favorite suds, then the “Meet the Brewer” gatherings from 6–9pm on Thursday nights at the Wazee Supper Club are the place for you.

You can start your beer drinking day during the Denver Beer Fest at the historic Capitol Hill Mansion Bed and Breakfast Inn at 1207 Pennsylvania, where they will serve Wynkoop’s Railyard Ale from 7:30–9:30am every morning from Sept. 23–Oct. 1.

Get your hop on Sept. 26 at the Wazee Supper Club with the Attack of the India Pale Ales. Versions of this highly hopped style of ale from Ska, Mad River, Great Divide, Grand Teton, Wynkoop and more will be on tap through the evening. Side-by-side tastings of this popular beer style are a great way to get an accurate take on who does it best.

An excellent way to learn your way around the Denver beer scene is to book a seat on the Denver Brews Cruise. There’s nothing like being driven to the city’s best breweries to taste and tour. Breckenridge Brewery as well as the two newest players in the Denver beer scene, Strange and Renegade breweries. Tours can be booked at brewscruise.com/denver.

But probably the best place to be if you didn’t get a ticket for the GABF is at the Summit Music Hall at 1902 Blake St. in Denver. On Sept. 29–Oct. 1 from 4pm–2am there will be hundreds of beers on tap and in bottles. Put on in conjunction with Boulder’s Reuben’s Burger Bistro—a local mecca for Belgian beers—there will be tappings of one-off kegs from local breweries, specialty brews and Belgian beers never before available in kegs in Denver. Food offerings will also include five kinds of German sausages, soft pretzels and more. Check out summitbeergarden.com for details on what’s on tap and special offerings.

One thing is certain: The Denver Beer Fest makes getting shut out of the GABF much less painful.