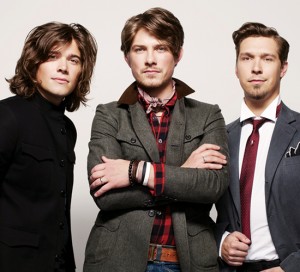 As hard as it may be to believe, those kids from Hanson are all grown up, with families of their own, and some pretty surprisingly solid musical chops. Amidst the band’s Musical Ride Tour, which lets fans choose each night’s set list ahead of time via online voting, lead vocalist Taylor Hanson takes a few minutes to talk about adulthood, surviving “Mmmbop” and his side project with supergroup Tinted Windows.

French Davis: How did the idea for this tour germinate…? Did allowing fans to choose your setlist pose any surprise gotchas on this tour? What have been the highlights/lowlights so far?

Taylor Hanson: The initial idea for the tour was inspired by the concert series Five of Five, which we put together in New York and London. The series was a week-long engagement of concerts where each night we performed one of our five studio albums in its entirety, as a live show. During the second series, which was in London earlier this spring, the idea of performing full albums live on tour began bubbling up. The final tour concept stuck when we settled on the concept of putting the tour in the hands of the fans through nightly voting—that pushed it over the edge.

FD: Of all the charitable causes, what led you toward AIDS/HIV prevention in Africa as what you wanted to champion?

TH: There are many worthy causes, but the issues in Africa regarding HIV/AIDS and extreme poverty resonated for a couple reasons. Firstly, there is no other issue impacting people of our generation in a more devastating way. Secondly, there are real things that can be done about the issues triggering HIV and poverty, that are significant and that make a lasting difference, most of which are simple and tangible…it’s just a cause that needs many champions.

FD: The Tinted Windows project is fascinating, can you talk about how that happened? I can’t imagine a universe where the guy from Hanson and the guy from Cheap Trick happen into each other and decide to start a band.

TH: Tinted Windows was/is an awesome project which, though it could seem far-fetched, was quite organic in its creation. The construction of the band was based on a couple friendships between musicians. Adam Schlesinger and I met years ago in 1996 when we were working on our first record, and many times talked about doing a project together. Years later, Adam and James Iha, who had known one another for some time and started a studio together, asked me if I would be into forming a band based on tight power pop songs and loud guitars. It sounded intriguing and something I knew we could pull off, so I said yes, and we started building an album. Along the way, we reached out to iconic drummer Bun E Carlos to play drums on the record and be a part of the project, and once he heard the songs he agreed … You know, it was about the music (how bizarre). After about three years of on-and-off sessions, we had a completed record, and we found a label that would put it out.

FD: You did “MMMBop” on Dancing with the Stars recently. Do you still enjoy playing the song? There are obviously a ton of benefits of having a popular song, but in retrospect, has having a gianormous hit hindered your careers at all after the shine wore off? Has it made it harder to be taken seriously in other endeavors?

TH: We’re really proud of “MMMBop” and enjoy playing it still after 15-plus years. There’s good and bad to a big hit song, of course. There’s no question you always desire for people to have a wide and varied perspective on your career beyond a few hit songs, but you also have to be proud of anything that can reach millions of people, especially when it is with something that you created and has meaning to people.

FD: You all seemed to escape adolescence without a rap sheet. How does a young celebrity stay out of trouble?

TH: Well, I guess how anyone else stays out of trouble…stay out of trouble. Also, not seeking out the most celeb-popular locations for your entertainment can help, so that your mistakes are done outside of the limelight instead of right in the middle of its beam.

FD: How has growing up and having families changed you as musicians and songwriters? How does being musicians influence how you are as parents?

TH: I think for all of us, it is simply further inspiration in our lives, and something that enhances your view of the world as an artist. We love being dads—there’s nothing better.

FD: What are some of the biggest business differences in the music industry between when you first broke and now? Are things better or worse?

TH: Well, when we started you had to be a mad scientist to get on a computer and find any song in the world for free. Now most anyone can get any media without paying for it and walk around with thousands of them on a mobile device. I would say that is a pretty big difference in the business of music.

FD: Who is on your iPod these days?

TH: Hmm. Some old and new. Listening to the late Amy Winehouse, who was such a sad loss for the music world and for millions of her fans. Also, a couple artists that are on tour with us this fall, Charlie Mars and Meiko, who are both fantastic. Also, Mark Ronson and the Business International who we caught up with in London this last weekend at V Festival.

—Andra Coberly contributed to this story.