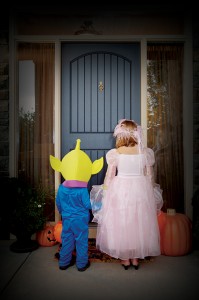 OK, let’s be totally honest. As much as you love candy and dressing up as a princess, this holiday is really for the Dora the Explorer set. It’s play time, and we are your guide to everything that goes bump in the night.

This year, the epic battle continues between monsters and superheroes. Traditional monsters, including zombies and vampires, will still be popular, but add apes and transformers to that list—because of the popularity of classic movies including Rise of the Planet of the Apes and Transformers. As for superheroes, Captain America, Thor and Green Lantern will top the list with their movies out this year, and Batman is still a big hit. For a fun DIY idea, sew some ears and a tail onto a pair of white footie pajamas or longjohns, add a crown, and send your little monster out as Max from Where the Wild Things Are.

Fairies and Barbie are hot this year for girls’ costumes, as is Angelica from the latest Pirates of the Caribbean movie. Characters from the cartoon Monster High—Frankie Stein, Draculaura and Clawdeen—will also surely be popular. Strawberry Shortcake is back, with red wigs and freckles popping up everywhere and—try not to feel too old, mom and dad—the ‘80s are the decade to dress from this year. A fun DIY for a younger girl: start with a pair of pig’s ears on a headband (or make some from felt) then add a red dress and some zebra-stripe tights and your girl can go as Olivia the pig from her popular eponymous picture books.

Pea pods are cute and classic, as are pumpkins—in fact, anything that makes a roly poly baby look even rounder is a winner. Should you happen to have twins, double the fun with classic pairs such as salt and pepper shakers or sushi and soy sauce for adorable combos. If you have older kids (or adults) going as Harry Potter characters, baby can go as Hedwig the owl—costumes and instructions abound online. An easy DIY is a crayon costume; make a tube-shaped shift and cone hat from one color of material and add the requisite letters and black stripes with black felt.

For pups, we love anything food related—hot dogs, sushi rolls, tacos, you get the idea.  A superhero cape turns mild-mannered Fido into Superdog, and you might even be able to recycle one of your kids’ old costumes! If your pup will put up with it, silly hats are easy, affordable and guaranteed laughs whether you go for a cowboy hat, a fez or a crown. To DIY your doggy duds, make or buy a plain doggy T-shirt or cape and add the phrase “Bad Dog.”  You’re sure to get some giggles.