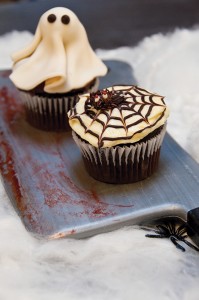 Creepy Cupcakes
by Genny Fetherson
Piece, Love and Chocolates
805 Pearl St., Boulder, 303.449.4804
Both designs can be made from any cupcake base, with a favorite chocolate frosting and white frosting. The ghost cupcakes are made by using white fondant, which can be easily found at any major craft store in the cake decorating aisle.

For spider web cupcake:
Frost the cupcake with white frosting, making the surface fairly smooth. With melted chocolate, make a spiral design starting in the center of the cupcake and circling outward. Immediately draw a toothpick through the pattern, moving from the center to the outer edge. You can make a spider by using a black jellybean (or coffee bean). We covered ours in chocolate and rolled it in sprinkles (to make him hairy!). If you want, make eyes on the spider by using melted white chocolate and legs using dark chocolate.

For ghost cupcake:
Frost the cupcake with either chocolate or white frosting. Place a large marshmallow just behind the center of the cupcake. Roll fondant on a clean, smooth surface (use a bit of vegetable shortening to keep the fondant from sticking). Cut into 4-inch circles. Carefully place one over the marshmallow and sculpt it to create the head and flying body. Add eyes by quickly melting the bottom of a mini chocolate chip and placing it on the ghost’s face, or putting melted chocolate on the bottom of chip to use as glue.

1. In a large saucepan over medium heat, combine sugar, corn syrup and salt. Stir until sugar is dissolved. With a damp pastry brush, wipe down the sides of the pan.

2. Stop stirring, raise heat to high and cook until the temperature reaches 290 F.

3. Pour syrup onto a marble slab or heatproof, non-stick surface, sprayed with nonstick spray. Using a bench scraper, fold the edges of sugar mass in toward the center.

4. While the candy is hot, add extract and color. Don’t worry if the color is not even, when you start to pull, it will smooth out.

5. When the candy is cool enough to handle, wearing latex gloves—sprayed with nonstick spray—pick up enough candy that you can pull but not so much that it’s hard to handle, start pulling the candy into a rope. Once the rope is formed, fold in half and pull again. Continue this for approximately 10 to 15 minutes or until the candy is opaque and very difficult to pull.

6. Pull into a long rope and cut (spray the scissors) into half-inch pieces.

7. Wrap each piece in wax paper. The candy will keep for 2-3 weeks in a tightly covered container. Do not refrigerate.