For the Love of Education 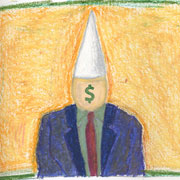 God bless Rollie Heath. Despite having his thoughtful ballot question, Proposition 103, shot down by a 2 to 1 margin, he exhibited something sorely lacking in modern government: leadership and vision. His proposal—to slightly raise sales and income taxes across the state—would have injected much-needed cash into Colorado’s decimated education coffers to the tune of nearly $3 billion in five years.

But the measure failed, thanks in part to the cowardly silence of Gov. John Hickenlooper and a large percentage of lawmakers, both local and state. The fate of the measure was guaranteed by the deafening silence of our Progressive In Name Only governor and his fellow lawmakers.

Given the paltry resources We The People of Colorado are willing to put into our schools (2009 Census figures show we rank 40th in per pupil spending and that doesn’t take into account the past two years of Draconian cuts, which certainly drops us closer to the bottom), our workforce will soon be struggling to qualify for fast-food jobs, let alone the high-tech positions our governor hopes to lure to our state.

A beautiful mountain backdrop, great weather and major league sports go only so far in seducing companies to relocate here. Smart people who can handle the work—not to mention good schools that are up to the standards of the techies who move here—are the key to luring a high-profile, high-revenue company to Colorado.

So if we aren’t willing to spend the money to bring our schools up to even mediocre standards, I have a solution. Funnel all of our transportation money into the education budget. Decrepit roads should be considered a challenge, not a liability, for the ubiquitous sport utility vehicles that are the state car. And when bridges collapse, it’s just that much more of an off-road challenge.

And should some unlucky schmo get beaned with a loose chunk of concrete, they’ll win the failing transportation infrastructure lottery, with the survivors getting a tidy settlement from the state.

I’m only half kidding here. When a state spends (as of 2008, according to the U.S. Department of Justice) more than $20,000 per inmate and less than half that per student, we are seriously hosed. And don’t look for the prison expense to get cut. The prison guards’ lobby has ensured that any reduction in mandatory sentencing and the reduction in costs is off the table.

The only hope we had for sanity in our state spending was Rollie Heath’s Proposition 103. God bless him and the 10s of thousands of petition signers who put the measure before the voters. And shame on Hickenlooper for staying mum on the issue. He, along with many other Democrats, have failed to lead or even speak out for something that we all would benefit from: greater spending on education.

So, let the hand-wringing begin as the legislature gears up to hack even more from the state’s education budget.

It will be interesting to see what happens when the Regional Transportation District’s tax question shows up on the ballot in 2012. Will the usual suspects again be mute and get schooled at the polls or will they show they learned their lesson, demonstrate some leadership and support the measure?

If they continue to fail, we will all pay the price.