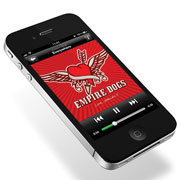 As iCloud rolled out with Apple’s release of iOS5 and the iPhone 4S, one of the things that really started to stand out was how far we’ve come in terms of streaming media; specifically over our cellular networks…and how far we have to go.

I want to basically store as little as possible on my iPhone. It should merely be a conduit to what I need: Internet, chatting, playing Words with Friends, etc. One of the things I like least about my iPhone is having to carry around several gigs of music that I want to swap out every month. I’d like to sync on any machine, not have to decide which device I want to use to listen to music.

Which is why I use Pandora.com so much, but the free version’s catalog is limited and the occasional commercials are blaring. But then the clouds parted and Spotify.com appeared. The streaming-music service has been a Godsend for people like me. Before I committed to the paid version, I figured I’d compare it to similar services. What follows is my analysis, so you can make an informed decision about which you’d prefer.

Spotify.com
Cost for premium: $9.99/mo
Speed: Fast. Pretty much no discernible difference between 3G and Wi-Fi.
Catalog: Giant and growing quickly. More than 16 million tracks; 10,000 added daily.
Supports syncing your own music: Yes
Ease of use: Set up is a little dodgy as the desktop app needs you to first set up an account online then go back and set up the desktop app then set up mobile apps, etc.

Google Music
Cost for premium: Google music is free while it’s still in beta for Google.
Speed: Very fast. Some chugging on the Amazon side on occasion .
Catalog: Limited to what you own, up to 25,000 tracks.
Supports syncing your music: Yes, and that’s it.
Ease of use: As with everything Google, it’s a snap. But this is more cloud-based storage solution with a streaming component than music service. And it’s not iOS compatible.

Amazon Cloud Player
Cost for premium: $20/year
Speed: Noticed some hiccups when I still had three bars.
Catalog: Limited to what you own, up to 20 gigs. However, any tracks purchased from Amazon don’t count against storage limit.
Supports syncing your own music: Yes. You can add tracks you’ve purchased from Amazon.com as well.
Ease of use: It’s compatible through the iPhone’s web-browser interface, so not completely native as in Spotify’s case. Still, pretty easy to navigate the system.

Rhapsody
Cost for premium: $10/year
Speed: Fast. Even down to one bar.
Catalog: 13 million and growing.
Supports syncing your music: Nope
Ease of use: Easy to set up and has iOS support, but it’s a pure streaming solution, meaning you can’t upload your own music

Winner: Hands down, Spotify takes it. It supports your own music collection, streams to unlimited devices, and works fast and seamlessly. Plus, it has the biggest music catalog in the bunch. For the cost of an iTunes album a month? It’s a sweep.