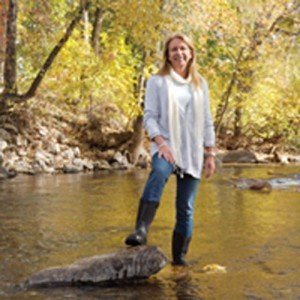 Vicki Nichols Goldstein has always been, what she calls, an ocean junkie. So it only seemed natural to establish an ocean advocacy organization in a land-locked state. Nichols Goldstein grew up surfing the Jersey Shore. She studied marine biology and marine policy and planning. She served as the director of research and policy for Save Our Shores, a marine conservation organization. She joined the National Oceanic and Atmospheric Administration to develop national oil spill contingency plans and worked on Monterey Bay’s National Marine Sanctuary Designation.

She even traveled across New England with a 20-foot-long whale skeleton for a project called Whales on Wheels.

“My true passion is about ocean awareness and citizen involvement and engagement,” she said. “…You don’t have to see the ocean to
protect it.”

So, about a year ago, Nichols Goldstein developed the Colorado Ocean Coalition to educate the community about climate impacts on the ocean environment. She started Blue Drinks, an ocean-focused version of Green Drinks, social meet-ups for those who work in the environmental field. And
in November, she hosted Making Waves in Colorado, which brought together some of the nation’s leading ocean experts for panels, workshops and education on ocean issues. That included speakers such as Sylvia Earl, chief scientist for NOAA and explorer-in-residence at National Geographic.

“I’ve had a lot of support from people across the country,” she said. “There is really nothing like this in the middle of the country. And there is a need.”

The coalition’s goal is to create a supportive ocean movement in Colorado, looking at ocean issues and addressing them. She even took a delegation to the Blue Vision Summit in Washington, D.C.

“We brought a big Colorado Ocean Coalition banner to D.C. with us, and people were like, ‘What the?’”

Now that the coalition has spread information and awareness of issues and grown a network of supporters, it’s time to determine the goals and outcomes for the fledgling organization. She said she’s not sure what exactly it looks like, but Nichols Goldstein sees good in the coalition’s future.

“Colorado residents have an outdoor ethic. People love to be outdoors and they love the idea of protection and conservation,” she said.

On Colorado: “We are a network of ocean-loving people a mile high. …Every week, I get so excited to meet different people here who are linked to the ocean. We can be a powerful force for conservation.”

On her following: “Many people in the area come from the coasts. They have a longing for a coastal connection.”

On conservation: “What we do has an effect on the environment. We need a higher level of awareness.”

Why should Coloradans advocate for the ocean? “If you like to breathe, you care about the oceans. If you eat seafood, you care. …In Colorado, we have direct ties back to the ocean, and a lot of what we do ties directly to the health of the ocean. Even something as simple as how often we use plastics. It’s our lifestyle choices that impact the planet.”