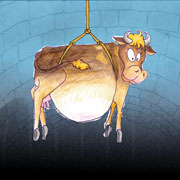 Firefighters rescued a pregnant cow that fell down an Erie well, Lafayette psychic Nancy Marks had herself hospitalized on the day of her fortune-telling fraud trial, and Erie High School students got Halloween day off courtesy of a handwritten bomb threat. The 1993 Longmont homicide of Tammera Tatum was featured on the Discovery Channel’s Cold Blood. CU will soon use poultry feces in lieu of herbicides, and a 5-year-old trick-or-treater suffered facial injuries when she was hit by a truck. A mother/daughter duo was arrested on suspicion of robbing a bank in Westminster, and investigators say Gregory Kotsaftis, owner of Boulder’s Go Motors, defrauded at least eight customers. Boulder police arrested two city employees in connection with a peeping Tom incident, and the Louisville City Council killed an emergency-preparedness measure that would have allowed it to seize private property during crises. Fired town manager Scott Randall filed a suit against Superior over his severance package, and Charles Edward Waters, 56, admitted to stabbing two other homeless men, killing one, in Boulder. A buffalo head found in a Boulder yard turned out to be one of the resident’s souvenirs from Nebraska, and the state Supreme Court declined to assess the mental health of a woman who said she suffocated her 6-month-old son because she thought he had autism.

“We didn’t have anyone indicate to us there was a problem. Now that we’ve got this case, you look back and say, ‘Gee, why didn’t we know?’” —Erie Police Chief John Hall on a case involving a 14-year-old boy who was allegedly locked in his room in squalid conditions. Police responded to 22 calls to the residence since 2008 but said they knew nothing of the possible neglect.

“Higher education is likely to be the target for further cuts. …Higher education funding continues to be vulnerable. It is one of the only flexible components of the state budget.” —CU-Boulder Chancellor Phil DiStafano on Colorado decreasing financial support from 15 percent of the campus budget in 2002 to less than 5 percent this year, making CU the lowest-funded flagship university in the nation.

“He sold our source drugs, who then dealt them in Longmont. Do we have a cartel running around Longmont? I don’t think so.” —Longmont Police Sgt. Sean Harper on Operation Private Dancer—which broke up a cocaine ring of one possible member—which likely put Longmont on the National Drug Intelligence Center’s list of cities with active Mexican drug cartels.

“We will do everything we can to not break any laws. We don’t want to harm anyone, but we feel like we’ve been harmed.” —Sarah Peterson on Crypt’s Garden haunted house, whose owners were forced to move out when Federal Deposit Insurance Corporation took over FirsTier Bank, which had foreclosed on the property and shut the house down.

20
Number of bison CNN founder Ted Turner will donate to the City of Boulder.

3
Millions of dollars the Lafayette City Council approved for a south-side fire station.

1.4
Amount, in millions, it costs to host the Shakespeare Festival at CU-Boulder.

203
Bus route, along with Superior’s Call-n-Ride, eliminated by RTD.