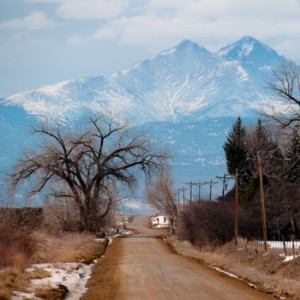 In winter, these normally heavily trafficked routes can be less clearly marked, but topo maps and turn-right-at-the-tree directions abound for this uphill, butt-burning battle. Experienced snowshoers/backcountry campers shouldn’t have trouble finding the gorgeous alpine lakes or a nook to tuck a tent into.

Miracle in the Mountains
Longs Peak

Thirty-fourth Street has nothing on ski mountaineering Longs Peak in the winter. After that miracle, balling out in basic accommodations at the bottom ain’t no thang. Drop the tent at the RMNP Longs Peak campground, forget both amenities and reservations, and party on.

Tucked in the Colorado portion of Routt National Forest, this gorgeous area is great for a weekend of meandering snowshoeing, cross-country skiing and star-lit back-country camping. Less-intense winter campers who still love the view should head to nearby Walden, Steamboat Springs or a Never Summer Nordic yurt in State Forest State Park.

Count on snowshoeing from Camp Dick—Middle St. Vrain Road is closed from late October through late June—then bear left (east) on the Buchanan Pass Trail (the westward St. Vrain Glacier Trail crosses creeks past the Buchanan Pass Trail turnoff that aren’t safe in winter). Red Deer Lake is about 14 miles roundtrip from Dick, so head out early and camp at Dick, or camp in the gorgeous Indian Peaks Wilderness backcountry.

Pack out into the Never Summer Wilderness and hide away in several area yurts (including at the lake and Clark Peak) for a rustic weekend without roughing it. Explore the southwest slopes of Clark Peak by day, warm up by the woodstove at night, and stare at the stars over the lake till sunrise.

Something about this area just grows on outdoor enthusiasts, especially when it’s blanketed in white. The Crested Butte Nordic Center offers amenities aplenty, while rookies test their wings cross-country skiing and snowshoeing to the Magic Meadows
Yurt about 30 minutes from all of the action.

Ski untracked snow while a warm, soft bed awaits at any of dozens of 10th Mountain Division cross-country huts in White River National Forest. Count on miles of trekking or skiing into the forest, but proper planning (or guided trips) can put most hikes within 5 or so miles of both a hut and pristine powder.

Ski mountaineer Red Mountains 1, 2 and 3, play in the pass and Who it up on the whitest red peaks in the state. As the Grinch says, “The sun is bright and the powder’s bitchin’!” so snag a backcountry hut in Telluride or Ouray and spend the holidays in the snow.