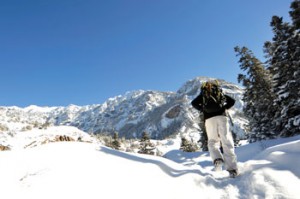 Backcountry at Cameron Pass brings in skiers from throughout the region for steep passages in Nokhu Crags and near Ruby Jewel Lake (with yurts nearby if you just can’t go home). Chill out at Montgomery Pass or risk a little Diamond Peaks’ steep bowl action (avalanche gear recommended).

An easy hike in the summer, snowshoeing Mount Elbert (14,440 ft) in the winter just isn’t for first-timers to do solo, especially when combining the elevation gain with a little rough terrain. With a few sporty cohorts and the proper prep, however, Elbert offers great views of Colorado’s other highest peak, Mount Massive (14,421 ft) and a pretty mellow march to the top.

Explore a new set of powdery paths on roughly 200 ice and mixed climbing routes with the rest of the freaks who celebrate ice at the Ouray Ice Festival. Ouray’s climbing clinics and seminars make even the rock rookies feel like the Italian Stallion of ice. Skip the ski passes and go a few rounds—it’s free and open to the public.

Take nordic a little too seriously, baby those skis with a hot box or a stone grind, then nordic fest it up at Tommelfest. Rent a sled to drag the kids along or take advantage of an advanced technique class before hitting any of the more than 100km of groomed trails.

Field of Dreams (and snow and rocks…)
Mount Bierstadt

Start at dawn and snowshoe the west side from Guanella pass for about a six-mile (roundtrip) snowy summit on Bierstadt. Be a little more badass and take on Bierstadt, Sawtooth Ridge and Mount Evans in one early, hard-hitting day. Although it can be dangerous, Sawtooth isn’t as scary as it looks from Bierstadt.

Christmas or not, dream of White River National Forest with a little help from Vail’s snowshoe, backcountry or skiing tours. Try something new with Telemark or cross-country skiing lessons, or really work those skills with a Skin and Ski Telemark
cross-country tour.

OK, so about the only activity not offered in Redstone is soccer, but when you can’t bend it like Beckham, nothing beats torch-lit ski trails, skate and ski races, sleigh rides and ice climbing. Pick your path, pack your pooch (for the Wiener Run and Doggie Dress-up Parade) or peace out away from the hubbub
for a little snow trek in nearby Maroon Bells.

No Nightmares Before Christmas, Thanks
Beaver Creek

Beaver Creek boasts that its visitors aren’t exactly roughing it and, as it hosts its 2012 Winter Culinary Festival via Food & Wine, we’d have to agree. Meet Helmut Fricker blowing his alpenhorn in lovely, tasteful pair of lederhosen before heading out on a 5K, 10K or combined Snowshoe Adventure (newbies welcome) and live it up at the sponsor expos, plaza parties and post-race meals.

With guided beginner snowshoe tours and free intermediate-level ski or ride tours, Winter Park’s intro to the area covers its huge bases (this is one of the area’s largest ski resorts) while also showing newbies around on sparkly, gorgeous nature trips. Rent gear, snag a map and tramp trails on a self-guided tour.