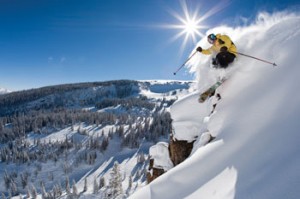 Party on, Dudes
Eldora Mountain Resort
Break the law of gravity with an excellent adventure full of sick action at Eldora’s terrain parks or at the double black diamond Corona Bowl. There’s no sledding or wimpy snowplay here, so strap on skis, a board or snowshoes, or go home. No delicate snow pansies allowed.

Feel the Need
Steamboat
Much like skiing Steamboat, everything else here is a dream, especially for snowboarders. Steamboat’s Mavericks Superpipe is 450 feet of world class riding, and the terrain park features kinked rails, sliders, rainbows, S mailboxes, double barrels, a mini-Mav (no mini-Goose though) and a mini superpipe. Steamboat is a complete mountain range with nearly 3,000 acres of diverse terrain, and its gladed ski runs feature trademarked Champagne Powder snow. Get some.

Meet the Legend
Arapahoe Basin
A-Basin is a throwback to the classics of snowsporting, when everyone cared about powder, people and plunging down the side of mountains at a million miles an hour. It rocks rail jams at its terrain park and more than 100 trails with tough timberline bowls and powdery light paths that promise diamonds black as midnight, black as pitch, blacker than the foulest witch (kudos if you remember The Legend). Oh, and there’s some lighter stuff, too.

Nobody Talks About
Silverton Mountain
Better than Fight Club, the only thing hitting you in the face here is snowy mountainside. Terrain at Silverton is exclusively for the advanced and expert crowd that loves a challenge—including heli-skiing here or in Alaska. The first rule of your next near-life experience: bring avalanche gear.

Get Epic
Breckenridge
With more than 50 percent black diamond or double black diamond slopes, Breck boasts badass snowsports on roughly 2,300 acres, five terrain parks, two half pipes and 155 trails on four peaks. Breckenridge is also home to Colorado’s largest historic district, more than 30 bars and its own, award-winning liquor distillery. May the force be with you.

Shaken, not Stirred
Ski Cooper
Little Ski Cooper is a no-frills, no lines, all-skill levels option for skiing and snowboarding that won’t break the bank. There’s no snow-making here, just 400 lift-served skiable acres, snowcat tours and a groomed terrain park. As it turns out, Mr. Bond, you can have it all—including ski, snowboard or telemark ski lessons with professional instructors.

Bangarang!
Monarch
Everyone at Monarch flies on all-natural, something-for-everybody runs to the same central location so nobody worries or gets lost. Snowcat skiers and riders have access to 1,000 acres, steep terrain and thick powder every season courtesy of Powder Cat snowcat. Revamped terrain parks, and Congo and Safari lifts to kids’ ski runs make Monarch a snowy little Neverland. Children six and younger and seniors 69 and older ski free.

Doggy Paddle
Crested Butte
With a mix of beginner to advanced options for skiing, tubing, snowboarding and snowshoeing, everyone gets a piece of this action—including athletes with disabilities who are well-served at the volunteer-based Adaptive Sports Center year-round. Head to the Adventure Park for ice skating, bungee trampolines, a climbing wall or the lift-served tubing hill, or check out the Crested Butte nightlife, especially the Princess Bar.

Bombs Away!
Ski Loveland
Loveland loves user-friendliness, so whether it’s snowboard practice at the terrain park, telemark ski clinics or the great mix of beginner to advanced slopes, it’s easy to find the right fit. One of the cheaper bets out there, Loveland rents just about everything, making it perfect for newbies and non-committals. Skip the Home Alone sequels this year and staycay in one of Ski Loveland’s cabins or nearby Silverthorne.

Great Scott!
Telluride
One of the top resorts in the U.S., Telluride is lightweight with all of the extras. Forget the flux capacitor, ski or heli-ski 1,700 acres or pound powder at one of the top-ranked terrain parks. Thaw out at the a warming hut, hit the Hop Garden for a beer and partake in a sleigh ride dinner…or any of the other dozens of dinner, booze and relaxation options.