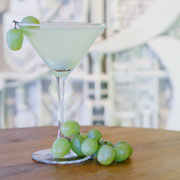 In Spain, revelers eat 12 grapes on New Year’s Eve, hoping to inspire good luck throughout the next year. We wanted to bring some of that New Year good luck to local sippers with a grape cocktail fashioned by the folks at Amaro Drinkery Italia, the modern cocktail lounge nestled between Arugula Bar e Ristorante and Tangerine.

While Challenging Elements is usually all about food, we opted for a cocktail challenge in celebration of the fast-impending New Year and its bubbles and brouhaha. Offering Champagne to any bartender or mixologist would be like giving salt to a chef. So, we went for the next best thing: grapes.

Christian Renault, “The Frenchman,” grew up working the bar in his family’s French restaurant back east, leaving at 16 to tour with the Grateful Dead. These days he tends bar in Arugula and Amaro. I ask him if he prefers the term “mixologist.”

Which, at first, made me a little nervous. If one thing can be said for the recent artisan cocktail movement it’s that drinkers benefit from the re-popularization of carefully crafted concoctions. Amaro’s specialty drink list includes Negroni, Amaretto sour, lots of local brands, house-made sour and the Tipsy Garden, including sauvignon blanc, Belvedere pink grapefruit vodka, fresh muddled arugula, lemon and soda. All of which are positive indications of Amaro’s aptitude.

Then Renault brought out what he calls The Grape Escape, a name I instantly loved due to its puniness. Renault muddles Leopold’s gin (a local) and shavings of ginger with white grape juice and a handful of white grapes and ice. He shakes and pours, making the martini glass glow with a light, opaque green. The Grape Escape is a lovely little drink: crisp and cool and not at all a drink you’d associate with the holidays. But it does remind me of winter and it goes down smooth, so I don’t mind. There is balance and depth. While gin is not my booze of choice, Renault ensures the sweetness of the grapes and spice of the ginger mellow out the juniper in the gin.

“The grape has pretty easy, simple flavors. Vodka would have been too plain, and you probably wouldn’t even be able to taste it. The gin brings something to it,” he said. “It’s very easy to drink, and it appeals to both men and women.”

It all makes me begin to think, who needs bubbles?

You can try out The Grape Escape at Amaro Drinkery Italia through January. Amaro is located at the northwest corner of 28th and Iris at 2785 Iris Ave. in Boulder. Find details at arugularistorante.com/amaro