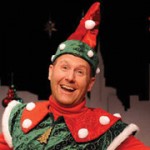 Not yet the tradition A Christmas Story has become, SantaLand Diaries is no slouch. The uproarious Tony-winner from David Sedaris is a regional favorite every year. It centers on Sedaris’ experiences working as an elf in Macy’s SantaLand. In fact, the piece, originally an essay read on NPR in the ’90s, catapulted Sedaris into the national consciousness. This year’s Boulder Ensemble Theatre Company production takes residence at The Dairy Center for the Arts, 2590 Walnut St., Boulder, Thursday–Saturday nights through Dec. 24. Tickets start at $15. Call 303.440.7826 for more information.

New Year’s Eve is typically a let down after a year of prepping and pondering how to close this particular chapter of your life. Because this is possibly the last year of our lives (unless the Mayans just ran out of numbers), expectations are higher. Enter Hotel Boulderado and its Masquerade Ball with two bands, a restaurant and two bars. You could do a lot worse than spending your last New Year’s Eve ever wearing a mask and partying here. Dec. 31. Tickets start at $50, Hotel Boulderado, 2115 13th St. Boulder, 303.442.4334.

Does a Body Good

There are few foods better than piping-hot oatmeal with maple and brown sugar on an icy-cold winter morning. It’s no wonder the Lafayette Quaker Oatmeal Festival is now celebrating its 14th year of combining this tasty breakfast food with its healthy living fair and a 5K fun-run. (Heads up, though, they’ll have no XL T-shirts this year. Yes, we were crushed, too). 7:30 am, 200 E. Baseline Rd., check out lafayettecolorado.com/oatmealfestival.html for more information.

Ever go to a concert featuring your favorite band from college that never tours only to have them refuse to play any beloved hits and instead focus on material from a soon-to-be-released car commercial album? Well, that’s not this. The Lemonheads is on tour once again, and this time, Evan Dando is focusing on music from It’s a Shame About Ray, the 1992 hit Rhino Records reissued in ’08. If you’re a fan, this concert’s for you. At the Fox Theatre, Feb. 3, 8 pm, $15+. 1135 13th St., Boulder, 303.443.3399

Sure it’s New Year’s Eve. But check out all these other awesome things that happened on Dec. 31…

3) 1923: The first time a voice is broadcast over the radio across the Atlantic