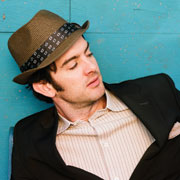 Close to 20 years ago, Garret Dutton and Jeffrey Clemens met Jimi Prescott in a bar in Boston, and shortly thereafter, G. Love and Special Sauce was born. Catapulting into national consciousness with the success of its quirky rap-funk single “Cold Beverages,” the band set out on tour, pretty much never to stop. Frequent Boulder and Denver appearances made G. Love an honorary local over the years. Here, he talks about recording on vinyl, dropping holiday albums and living in a crappy van.

French Davis: It is very interesting that you seem to have a huge built-in fan base here. Why do you think your sound resonates so much in Boulder?
G. Love: I think Colorado as a whole has been historically a live-music haven. There’s a lot of young, freewheeling and open-minded people in Colorado, and since we first dropped in ’94 we have been embraced.  Boulder in particular was the epicenter for our vibration out there and we played the s**t out of the Fox Theater over the years. I’m thoroughly looking forward to coming back for New Years, bringing the blues and feeling that love in Colorado.

FD: Can you tell us about This Warm December… how the project came together? What made you interested in recording a “holiday album?”
GL: This is the second Brushfire Records holiday record. I think now that Jack and I both have families, the appeal to do a holiday record was automatically there. I’ve always thought that caroling is the best part of Christmas. When my family gets together for the holiday, we jam out after Christmas dinner and everyone gets involved.

FD: Last year was the biggest year of vinyl sales since the ’80s, and you chose to offer a vinyl version of this album. What draws you to the outdated technology?
GL: I’ve always been a record collector, a vinyl collector. I’ve pushed hard to have all my records released on vinyl. Shoot, we’ve been around so long our first two records came out on cassette and eight track! (Google it or ask your parents. –FD) Aside from that, I just feel like everything sounds better coming off vinyl and the artwork certainly looks better the bigger it is.

FD: What do you miss most about the way things used to be when you first started out? What do you not miss at all?
GL: I miss the innocence and blindness of how it was when we first started. I mean I was 20 years old, my head was completely up my ass, I thought I knew everything. I was riding around in a crappy van for seven years playing over 250 shows a year. It was deep. It’s still deep now and I still think I know everything, my head’s still up my ass and now I ride around in a tour bus so it’s a bit of an improvement.  A lot has changed and a lot is the same, but I love it all. Do what you love.