If you hadn’t been paying attention, it would be easy to believe that oil and gas companies crept into rural suburban communities like Erie under cover of darkness and drilled scores of wells while no one was looking. In fact, the opposite is true.

“Erie has really grown up around existing oil and gas development,” said Wendy Wiedenbeck, the community relations advisor for Encana Oil & Gas, one of several companies drilling for oil and gas in Erie’s back yards, sometimes literally. “Most people probably aren’t aware that they’re living on one of the most prolific gas fields in North America.”

Community awareness of drilling operations happened seemingly at once, as Encana prepared to open an eight-well drilling pad within a few hundred yards of Erie’s two elementary schools. These wells, and many others, use a practice called hydraulic fracturing—or “fracking”—to extract energy resources that would otherwise be impossible to reach. Well operators love the method, especially in East Boulder County and Weld County, which are situated above the Wattenberg oil and gas field. Extending from Greeley to Longmont to near the northern edge of Denver, the Wattenberg field is the richest oil and gas reserve in the Denver-Julesberg Basin, which extends into Wyoming and Nebraska. Encana alone works 900 wells, which draw 60 million cubic feet of gas per day from depths of up to a mile and a half below the surface.

But the method of extracting that gas has become a major concern to the communities that sit atop it. The Environmental Protection Agency blames fracking for contaminating drinking water in Wyoming with cancer-causing benzene, synthetic glycol and alcohol. Encana, which owns the wells in question, has denied responsibility, calling the EPA report “speculation.” In Pennsylvania, the EPA delivers fresh drinking water to the residents of Dimock, a town where fracking operations are blamed for polluting well-water with methane, causing some wells to explode. Type the words “flammable tap water” into YouTube and you can readily see why homeowners near fracking wells take little comfort in oil and gas companies’ claims that the practice is safe.

Another concern is air pollution. Fracking operations can release volatile organic compounds (VOCs) into the air, vaporous chemicals that can cause an array of health effects if inhaled, including respiratory distress; ear, nose and throat irritation; memory, hearing and vision loss; and other effects that vary widely and depend on both concentration and time of exposure. 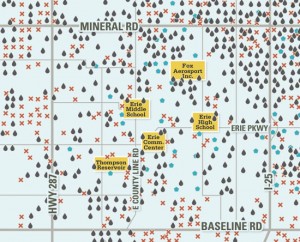 The number of permitted oil and gas wells around Erie. (Wells marked by a water droplet are currently in production.)

Although fracking has been a fact of life in Erie for decades, it wasn’t until Encana prepared to open an eight-well drilling pad within a few hundred yards of both the community’s elementary schools that parents became concerned enough to research the practice. When Angie Nordstrom, a parent with elementary school children in Erie, found a website with the locations of oil and gas wells in Erie, she was stunned by how many there were.

“That was absolutely shocking when you look at those aerial maps and see all those wells,” she said. “It’s alarming.”

In fact, there are 58 well pads within two miles of Encana’s proposed drilling site and each pad can contain as many as eight wells. Wiedenbeck, the Encana spokeswoman, says the community needn’t be concerned.

“We are very heavily regulated,” she said, noting that the Colorado Department of Public Health and Environment requires well operators to capture at least 95 percent of a well’s VOCs and maintain a 90 percent compliance across the gas field as a whole.

Those assurances aren’t enough for concerned residents, in Erie and elsewhere. The Longmont City Council imposed a moratorium on fracking in December, and in early February Boulder County followed suit. Both said they were examining their land use regulations to be sure they provided the maximum protection to human health and the environment as possible. In Erie, Mayor Joe Wilson said he would approach the CDPHE to help design and implement an air monitoring program and take steps to begin monitoring inflows at the water treatment plant for fracking chemicals.

Erie Rising, a grassroots group that formed in early January hopes to raise awareness about the potential hazards of fracking and, if possible, but an end to the practice.

“The fact that they decided to put an eight-well pad directly between the two elementary schools, when they did that it came to everyone’s attention,” said Erie resident Wendy Leonard. “There’s not enough data to prove that it’s safe. … There is exposure and ventilation into the air. How much we’re breathing, they can’t tell us. … So we and our children are guinea pigs. We will be, in ten years, living proof of the impacts of fracturing on our health.”

Nordstrom is particularly aware of the irony that the wells will be located within sight of Red Hawk Elementary School, which has environmental stewardship as one of its primary educational missions.

“Red Hawk is a green school and that kids will be looking outside and seeing this process going on is horrible,” she said. “We absolutely don’t want those eight wells to be built. We don’t want this process to continue in Erie.”

But despite this flurry of activity, there may be little more that can be done about it. Communities can’t permanently ban drilling because regulating is done on the state level.

Gov. John Hickenlooper has said he would fight bills seeking to give local governments more control over drilling, claiming that the state already has some of the toughest regulations in the country and that creating a patchwork of different regulations from county to county would be a hardship on gas companies. Those regulations are overseen by the Colorado Oil and Gas Conservation Commission (COGCC), whose director, Dave Neslin, recently announced that he would be leaving his position to join the legal team of Davis Graham & Stubbs, a law firm that represents many of the oil companies drilling in Colorado, including Encana. (See full story here.)

Still, Wilson said he was going to try to work with COGCC to institute Erie-specific requirements for new drilling permits, including that they contain specialized equipment to further reduce air emissions and that all fluids used in the process be utilized in a “closed loop” system to prevent possible contamination of water sources.

“We would set in Erie a new standard for quality,” Wilson said. “We would be addressing the concerns from all sides.”

But again, the best Erie can do is ask; COGCC isn’t obligated to add these additional requirements to permits issued in Erie. And even if it agreed to do so, it would only apply to new licenses, not the dozens that are already issued.

Erie Rising plans a month-long series of public educational programs around the issue of fracking on Thursdays, beginning with a screening of the documentary Gasland on Thursday, Feb. 16 at the Erie Community Center, 450 Powers St., at 6:30 p.m. For full details of this and other events, click here.