Will the COGCC approve a fracking site the size of five Walmarts?

It is our understanding that the COGCC has not yet approved this well site. This personal blog has a more current status of what is taking place with legal actions around Oil & Gas. Broomfield Concerned also reports as of Oct. 31st, 2019 it is delayed.

*Updates include information on the number of inactive wells in 2015, and statements by the COGCC and CGRS

Tuesday Night, September 12th, 2019 I attended the Erie Oil & Gas Fair.  I had low expectations going in.  Those expectations were met.

Right now there is an onslaught of advertising paid for by the Oil & Gas industry to tell us how wonderful fracking is. However, from our experience we have learned that the information we get from the industry is often misleading, key information is omitted, and sometimes is just wrong.

Today we have over 60,000 active wells, plus another 20,000+ that are inactive but are open for future drilling, with several thousand more applying. Drilling applications have risen (and been approved) by 70% each year since 2016 in Colorado.

We could face hosting one of the worst sites in the state if the Erie Acme Pad gets approved by the COGCC (Colorado Oil & Gas Conservation Commission). New director Jeff Robbins’ allegiance to the community’s Health and Safety and implementation of SB-181 will be tested with this application.

*To date, the COCGG has never not approved an application. Some have been rejected for improper completion, but to date, no application has ever been turned down. 181 is supposed to change that by changing the language from ‘foster development’ to ‘health and safety’.

The Acme site got approved right before SB-181 passed, but the city was being told by Crestone, that if Erie did not approve it and the Operator Agreement, they would bypass the city and get it approved by the state.

For those not aware of the Acme Pad, it is considered the worst site in the state after the Battlement Mesa/Ursa site on the Western Slope, based on proximity to homes and potential impact to nearby residents. The spacing unit for Acme is 36 wells within 500 feet of homes, 100 feet from the airport runway and a few hundred feet from Highway 7—a major thoroughfare for residents and business. This is a MASSIVE site and should concern anyone who lives near it. Erie Thriving, a local group concerned with health and safety has a lawsuit against this project. 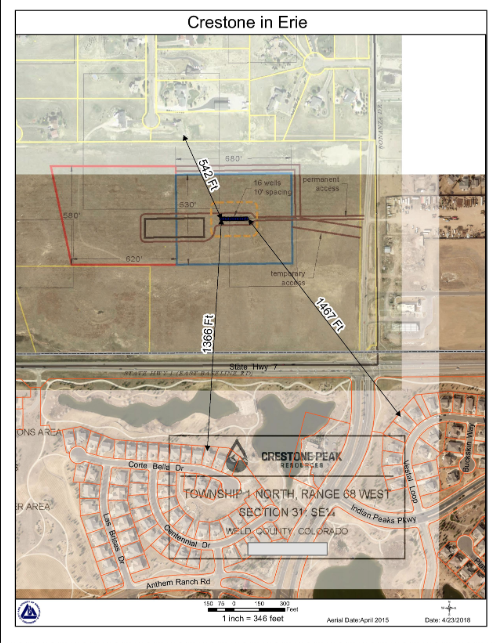 I met with the following people at their respective tables at the Erie Oil & Gas Fair:

I asked a lot of questions and recorded the answers. Here is my summary from this event:

Much of the state now has an “F” rating for air and the data the state is using to demonstrate safety, is outdated.

It is important to note: The tests the Department of Health are using are based on data collected from 2008-2016. However, from 2016-2019, we have seen significant increase in the number of active wells with no current data available.

In short, Erie currently has 149 active wells within the city. Out of Erie’s $106,000,000 budget, fracking generates approximately $800,000 a year. Not much money for the extreme dangers connected to the activity.

We have had three explosions in the area in the last couple years, of which one was deadly, and over 12 spills a week in the state. The IPCC warns we are down to 10 years to get it together.

Overall, the message I walked away with is that this group of experts was there to tell us that fracking is safe, with a small few telling me that O&G essentially has a gun to Erie’s head and there is little they can do even though they wished they could do more.

No one really addressed the Climate Crisis and fracking’s impact on it.

If you would like to contact the COGCC regarding Acme Pad or any other regulatory issue around fracking:

The next commissioner hearing is Sept 25th.