A not so certain climb 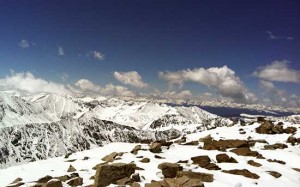 The dictionary defines “quandary” as “a state of perplexity, or uncertainty, especially as to what to do; dilemma.”

Quandary is also one of Colorado’s most well-known 14ers, particularly due to its reputation as an “easy” 14er. I have been gunning for the summit of a 14er since I moved here; however, I had only managed to bag a bunch of 13ers in the Indian Peaks. I am not trying to deny the 13ers their due respect: Some of those peaks are pretty treacherous. But there is an allure to climbing 14ers, especially during this unseasonably hot spring. I’m not a huge fan of heat. So, after one too many days of wishing I could be somewhere cold, I decided perhaps it was time to hit Summit County to chase some snow-covered peaks and frigid blasts of fresh 14,000-foot air.

My quandary: Everyone said there would be way too much snow, and that it’s way too early to climb a 14er. So…should I stay or should I go? I figured Quandary would be the best bet, given her reputation for being fast and easy (sorry, baby, you know I love you). If I was going to have to deal with all sorts of weather situations, it might be smart to tackle something that isn’t known for being insanely steep or ridiculously long. In the end, I resolved my quandary about Quandary by deciding to just go for it, bring some extra equipment, and make sure I was making prudent decisions at all stages of the game.

If you plan on climbing a 14er anytime, but particularly now, do some research. After conducting some due diligence, plan your trip as if the reports are both true and completely wrong.

I failed to do this and paid the price. More on that later.

My research on Quandary the night before said the trail was “clear, aside from a few snowy crossings” and that the weather was going to be cloudy with a chance of thunderstorms around 1 or 2 p.m. I had always been told that danger in the high peaks generally comes from the thunderstorms that roll in, usually around 2 p.m., and that no matter what, I should always plan to be up and back to tree-line before then. I had also been warned many times that if the sky starts showing signs of a storm, turn around no matter how close you think the summit is. If you find yourself trying to navigate, say, a boulder field while lightning is slamming all around you or rain is making footing impossible, you will be in trouble. Toss some cold weather, wind, snow and/or slush underfoot, add mud and you will find yourself in a pickle. And by pickle, I mean a search-and-rescue-broken-bones-head-injury-and-potential-death type of pickle. I assumed the weather report I read was right in line with what I was supposed to adequately prepare myself for, so I prepped for rain, packed a fleece and a down layer, took off early, and left my sunglasses laying on the coffee table.

When I left the house it was 20 degrees and cloudy in Blue River, exactly like the forecast predicted. As I drove through Breckenridge toward the trailhead, I noticed blue sky and…sun? We often assume that when weather contingencies mean the forecast says sun, plan for rain. The reverse is also true. The forecast said clouds, but I was seeing nothing but blue up above.

When I started hiking, it was perfectly sunny and crystal clear. It was cold but not that cold. I realized about a mile in that I had packed way too many layers, and I was going to be lugging extra weight. The trail was also swimming in snow, which would turn into slush and make my descent gnarly.

I meandered through the wooded area of the trail, pretty sure I’d not have to pull out my trekking poles until the very top. The snow on the trail initially was hard enough to walk on, and I wasn’t sliding around too much. I rounded a bend at some point, got a glimpse of the ridge to the summit and thanked God I brought trekking poles. It looked like K2. Totally white.

I will note here that the reason I am alive right now is because I brought trekking poles with me. Do not hike 14ers that are likely to have decent snow coverage without them. They stabilize and assist with balance, especially on the way down. They allow you to test snow-covered areas to see if the snow is going to be deep or, most importantly, if you are about to step on a snow-covered rock.

Hiking in snow is hard. As I ascended, it just got deeper. As I passed tree-line and approached the ridge, which would lead me to an open boulder field all the way to the summit, I realized this was going to be a challenge.

I lost the trail almost as soon as I hit the ridge; however, with the amount of snow up there, it turned out to be a good thing. I was leaving deep footprints to follow back down and not having an inkling of where the trail was allowed me to use my intuition to stick to places where I would have an easier time making it up.

I blazed my own little trail up to the summit. I ran into some tough spots, particularly crossing the boulder field where the snow was knee deep everywhere aside from on the rocks, but all in all the trip to the top was a good test of perseverance, and I never felt completely unsafe or unaware of where I was.

The summit was amazing. I ate a banana looking out at a postcard of the Rockies, snow-covered crags and clouds, and I must say, it was yet another moment where I don’t understand how I waited so long. It was also the absolute best banana I have ever eaten in my life.

The trip down was relatively uneventful. I left the summit at noon and as predicted was hindered by the fast-changing snow conditions. Slush makes everything harder, but my poles saved my life. I was able to follow my footprints back to tree-line without any serious mishaps.

Once I hit the trees again, and the portion of the hike where I actually found and stayed on the trail, I noticed that the snow had almost completely melted. Despite mud, a bit of slush and some tired, tired arms, I was safe and sound at the car, where I proceeded to chug two liters of water without taking a breath.

I felt amazing. I felt…expedition-y. I couldn’t believe I had done it with only a very mildly sprained ankle as an injury.

Or so I thought.

Two hours after I got home, I noticed that my eyes were pretty irritated. Upon inspection I realized they were red. Shockingly red. Eye drops did nothing. I figured the thin air had dried them out, so despite worsening irritation and unstoppable tearing, I figured I’d be fine in the morning and went to bed.

At 8 a.m. the next morning, I woke up and was unable to open my eyes. It felt like the Sandman had come and deposited about 40 pounds of sand under my eyelids. When I finally forced my eyes open I couldn’t see. My vision was so blurry I barely made it to my roommate’s room to beg for a ride to the ER. There was a torrent of tears that I had no control over, and the whole situation was making me feel nauseous and shaky. Not to mention scared.

Nothing will shake you up as much as the mere possibility of blindness or permanent eye damage. At the ER, I was told I had a pretty acute but typical case of snow blindness. In laymen’s terms: I sunburned the hell out of my corneas. The combination of high altitude, bright sunlight and the reflection of the UV rays off the snow had fried my eyeballs to a solid red crisp. Had I been wearing sunglasses, I’d be fine. Had I prepared for all weather conditions, I’d be fine.

Take this piece of advice, if nothing else: Snow blindness sucks. It hurts. A doctor can’t give you anything to make it heal quicker (aside from pain-killers to numb the pain) and you look just plain gross until it heals.

Also, be forewarned, if you plan high-altitude snow hiking, not all sunglasses are going to protect your eyes adequately. Make sure to get glasses with angled lenses that will effectively prevent the light from sneaking in beneath the rims. Generally speaking, hiking in the high peaks is smashing good fun, but your preparation will make or break how far you will be able to get. Always have the essentials listed on the previous page (as well as gloves and, of course, sunglasses), and always leave earlier than you think you should. Now go get some good old-fashioned natural Colorado air conditioning!

View all posts by Allison Perry →