How to predict a drought 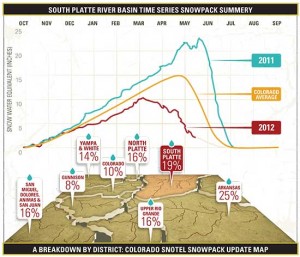 No major rivers flow into Colorado, meaning that all of the water used here—for everything from filling the swimming pool to watering the lawn—comes from the mountain snowpack. But what if, like this year, the normally snowiest month of March is a dud? In that case, we’re likely headed for a drought.

As of mid-May, the statewide snowpack was only at 12 percent of its historical average, a measurement that is taken by hand by water managers on snowshoes from January to April at various sites throughout the Rocky Mountains. The South Platte River Basin, which covers Boulder County, is at 19 percent of average. At this time last year, the amount of snow water equivalent in the South Platte snowpack was around 20 inches; in mid-May of this year, it was closer to 2.5 inches.

The city of Boulder’s water comes from the Silver Lake Watershed, which was around 50 percent of average in early May.

“This is very bad and will have impacts throughout the state,” wrote Boulder City Council member and former chairman of Boulder’s Water Resources Advisory Board Ken Wilson in an email to his council colleagues. “I have never seen this map with such a dismal report, even in 2002.”

That was the year of the supposed “300-year drought,” when conditions were drier than they’d been since 1685.

So why the lack of panic at having 300-year drought conditions a mere 10 years after the last one? In Boulder County at least, part of the reason is that its water storage facilities at Barker and Boulder reservoirs are expected to fill as snow melts. That’s enough of a cushion for the summertime that city officials recently decided against implementing water restrictions.

The real trouble could come next year, Wilson warned.

“The worry is really whether we have low snowpack next winter,” he wrote in his email. “That could be very serious. … We will hope that this very bad snow year is a one-time event and not the start of a multiyear drought.”