The generous monsoon season along the Upper Basin of the Colorado River has been a relief to those who remember recent summers suffocated by wildfire smoke in the American West. But according to Brad Udall, senior water and climate research scientist at Colorado State University’s Colorado Water Institute and former director of the Western Water Assessment at the University of Colorado Boulder, the relief we’re feeling now is a sign of bigger problems for years to come.

“Next year’s runoff will be really interesting to see what happens, it will be a test of this theory of depleted soil moisture,” Udall told a packed room at the Betty Ford Alpine Gardens Education Center on Aug. 19. The theory he referenced examines how the recent precipitation affects the trending drought conditions, drying reservoirs and the lowering state of the Colorado River, which is the primary source of water for over 40 million people spread across seven Western states, over thirty Native American tribes and into Mexico.

Udall’s relationship with the Colorado River goes deeper than just the focus of his studies. He grew up along its banks and worked as a river guide in his earlier years. He also comes from a long lineage of family members who have been influential in the river’s management for more than a century. His father, former congressman Mo Udall, fought to channel river water to Arizona. His uncle, Stewart Udall, was the former Secretary of the Interior who opened the Glen Canyon Dam. And his great great grandfather, John D. Lee, established Lees Ferry in Arizona. “Udalls are, in fact, Lees,” he told the crowd.

With a litany of charts, peer-reviewed studies and side-by-side chronological photographs of depleting reservoirs, Udall’s presentation, titled, “Colorado River Crisis: A Collision of 19th Century Water Law, 20tth Century Infrastructure and a 21st Century Population Growth and Climate Change,” broke down the intricacies of the compact that draws the water rights between these states, while establishing the environmental agitators that have formed, and grown, since the compact was agreed upon in 1922.

No longer calling it a ‘drought’

Merriam-Webster defines “drought” as “a period of dryness especially when prolonged.” According to Udall, we are beyond treating the Colorado River crisis as something that will soon pass, or ever will.

“This isn’t a drought, it’s something else,” he said. “Myself and other scientists are trying to use a different term: Aridification.” 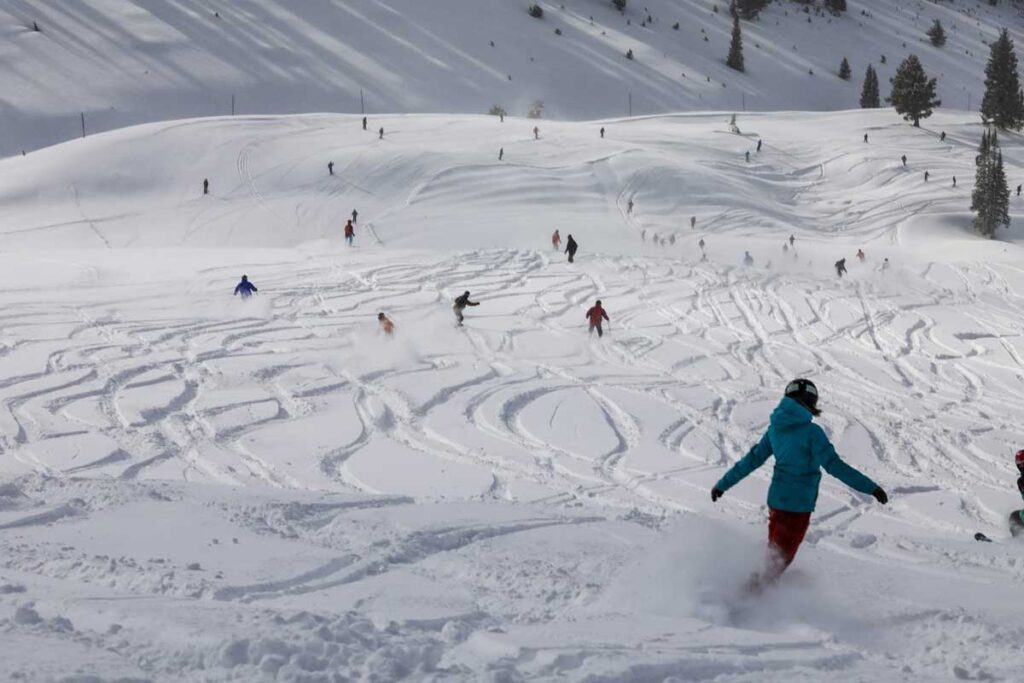 The atmosphere, and the role it plays in our water cycle, is part of the reason for Udall’s skepticism throughout a rainy August.

“This atmosphere, as it warms up it actually wants to hold more moisture. That’s part of also the driving force of why these soils are drier,” Udall said.

Enter rising temperatures, which make soil harder, plants thirstier and standing water evaporate more quickly, and the formula for runoff becomes offset. According to Udall, not only does a hotter climate affect the return we get from our water cycle, but it also explains why flooding can still occur, and even be exacerbated, in drought-stricken areas.

“This warm, thirsty atmosphere is why we get more floods, because when the atmosphere sets up to generate rainfall, it actually has more water vapor in it,” he said.

The extra water vapor is also problematic when calculating snow runoff, which is another issue state climatologists have been trying to decode in the face of shorter winters. “I want to talk about 85 percent of snowpack turning into 30 percent of runoff,” Udall said. “You’d think 85 percent snowpack would turn into 85 percent runoff or 60 percent, it doesn’t anymore … when the snow goes to melt, more of it goes into the atmosphere than runs off into the river.”

According to Udall, as temperatures rise and aridification evolves, the region will see its deserts grow as its most important river shrinks. “The world’s deserts are about 30 degrees north or 30 degrees south of the equator, this is a known aspect of how our climate system works,” he said. “Basically, we get high pressure that descends over thirty degrees latitude. What we think happens is when the climate warms, that high pressure actually moves upward, so in our case, the desert just to the south of us is moving our way.”

Every trend moving ‘in the wrong direction’

As Udall showed a chart outlining precipitation levels over previous decades, showing its decline in the last 22 years, the occasional sprinkles of rainfall occurring outside during the presentation seemed even less significant. 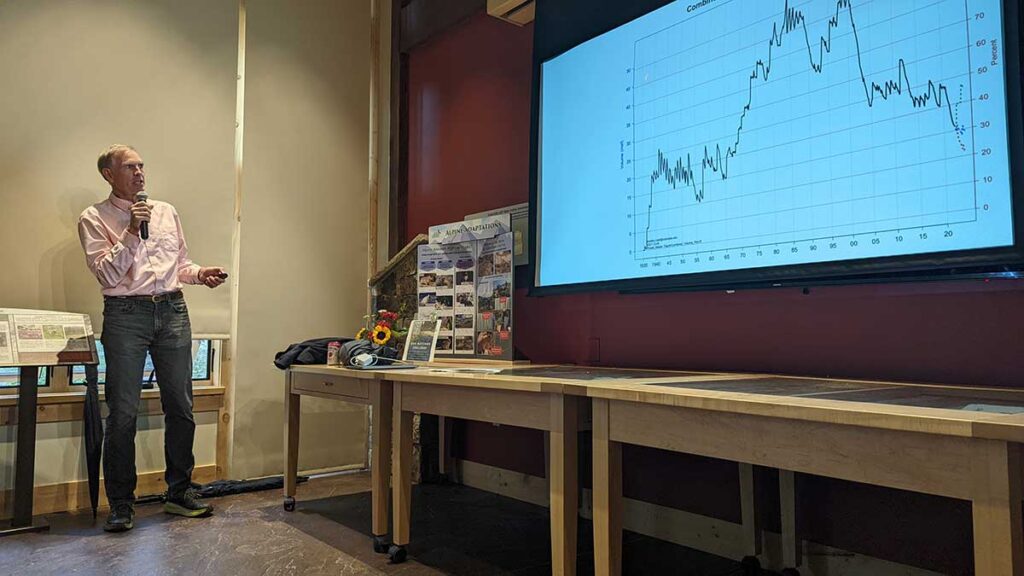 These two trends of low precipitation and high temperatures make the situation along the Colorado River more critical than ever.

“If you took the worst period in the 20th century, the worst 22-year period, if it had only repeated, instead of the 22 years we last got, our reservoirs would be 55% percent full, not 27%. It would be of concern, but it wouldn’t be the crisis that it is,” he said.

While history has repeated itself before, Udall’s presentation suggested to not bet on it. “We’ve got to anticipate flows even lower than what we’ve seen the last 22 years. We didn’t put a number on it, we just said a ‘reasonable worst-case future,’” he said.

As the water supply from the Colorado River diminishes, the demand continues to grow. Population growth has not only filled the major cities that depend on the river’s water, it has also spurred the rise of new cities along its basin, further complicating the debates over how the water is allocated. “We now need to think about how to turn some of this back … we have no control over the supply, so we have to dial back demand,” Udall said.

While Udall maintains that Colorado has been exemplary in managing its water allocations with heightened efforts in engineering and overall communication, there are lessons to be learned with the innovations that are happening across the basin as a whole.

One crowd member asked about the desalination efforts in California, and Udall acknowledged desalination as “part of the solution, but it’s a tiny part of the solution,” citing efforts from Australia in past decades that have come with their own respective challenges, one of the largest being cost. “Ag(riculture) will never be able to afford it,” he said.

Udall then pointed to the reintroduction of beavers in some places as another potential part of the solution. “There has been some interest in reintroducing beavers to places in the High Country to get these wetlands in place where you store water, and you get these sponges that slowly release water later in the year … whether that would work I don’t know, but it’s another idea along the same lines,” he said.

As for switching to crops that use less water, that, too, comes with its own hurdles. “Crop switching is actually pretty complicated, it needs new agronomic knowledge, new production and marketing, new labor and equipment … you need a collective of people in the same area growing new stuff,” Udall said.

Udall gave mention to Arizona’s use of aqueducts and Las Vegas’ innovative water recycling system, while maintaining those conservation efforts, and a more conscious use of water consumption in our daily lives, are still the best ways to buy more time.

“I just feel like we need to get demand off this system and I’m not sure how to do it with the resources we have,” he said.

A view from the top

Colorado’s Upper basin position will give Coloradans an advantageous view of what works, and what doesn’t work, as lower basin states face more urgent scenarios in years to come.

While speaking to a ski-town crowd, Udall was conscious to address what this crisis means for our favorite winter activity and the industry that surrounds it.

“Here’s the good news for people that live in Colorado: so it’s higher and colder in the mid-continent,” he said. “If you had a ski area in the Sierras right now, when it wants to rain in the winter I’d be worried. Anywhere where you have a maritime climate that’s close to the ocean and it was previously 31 (average degrees) in winter and now its 33, you’ve got a huge problem. Colorado is higher, drier and colder and will remain that way. So these ski areas will do better than ski areas anywhere else. It’s raining in the winter here too — and it shouldn’t be ­— so it’s good news and bad news.”

Udall also has a heightened sense of faith in how Colorado is managing its situation. “In general, Colorado of all the Western states has its act together more than any other state. Why is that? Because our water rights system is slightly different, and for better or worse, we put in place a system that has a whole set of separate water rights codes and attorneys that specifically practice in water and engineers that specifically practice in water … so we have records and data and court decrees, we know where our water is used, who owns it, how it’s used … and in that is a system that at least gives us the data to make good decisions.”

“More than any other state, we are better off … but it’s still not great.”