These are not the drones you’re looking for 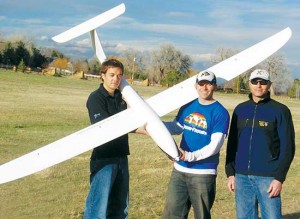 On Monday, May 14, a corporate jet flying 8,000 feet over Cherry Creek nearly collided with an unknown object. The pilot called air traffic control to report that something that looked like a small aircraft passed him going the other way. It didn’t show up on radar and, had it hit the jet, could have resulted in a tragedy.

While the Federal Aviation Administration is investigating this mystery object, Brian Argrow, a professor at the University of Colorado-Boulder is certain of one thing—whatever it was, it wasn’t a drone from CU’s unmanned vehicle research program.

“It wasn’t us,” he says emphatically.

Until recently, not many people realized that CU runs one of the busier research programs in the country that tests and perfects technology used by unmanned aircraft. That technology can be used in everything from scientific research to warfare.

These drones, most famous for their uses on the battlefield, have raised many an eyebrow lately as they’ve been adopted by more and more law enforcement agencies, including the Mesa County Sheriff’s Office. Civil libertarians raise concerns about their potential to spy on Americans and, even more ominously, to fire weapons at them. In Texas, the Montgomery County Sheriff wants to arm one of his department’s drones with tear gas and rubber bullets, even though during a recent demonstration, the drone crashed into its SWAT team’s armored car. Until recently, no one knew where in the United States the FAA had approved drone flights or what agencies were authorized to fly them.

The question was answered last month when the agency, which had been sued for the information by the Electronic Frontier Foundation under the Freedom of Information Act, released a list of 63 organizations approved to fly drones in the United States. Most are expected governmental agencies like the U.S. Air Force, NASA and the U.S. Army, but there were also several universities, including CU, which has been issued more than 60 certificates of authorization (called CoAs) from the FAA to conduct unmanned flights in and around certain areas in Colorado, Kansas, Nebraska and Wyoming. The university had done research and testing on unmanned aircraft since 2000 and established an official program, called the Research and Engineering Center for Unmanned Vehicles (RECUV), in 2003.

Furthermore, he said, no one at RECUV calls them “drones.”

“In the public consciousness ‘drones’ are associated with some sort of military application,” he said. “We have had some military funding to explore some ideas, but we don’t actually deploy military systems. We’re about research.”

Indeed, and that research is sponsored in part by arms manufacturers and private defense contractors like Raytheon and Lockheed Martin, as well as by government entities like the Air Force Office of Scientific Research, the Defense Advanced Research Projects Agency (which commissions advanced research for the Department of Defense) and NASA.

The university’s current set of CoAs allow flights only in specific geographic regions on the northeastern plains and into neighboring states, chosen by meteorologists for their atmospheric propensity to form super cell storms and tornados. RECUV scientists fly unmanned Tempest aircraft—equipped with ad-hoc WiFi to communicate with the ground crew, a video camera, an autopilot node and atmospheric sensors—into violent storms to study tornados. CU also has a few NexSTAR airframes, which look like off-the-shelf radio controlled model planes, and a retired fleet of carbon-fiber Ares aircraft that CU specially designed for an Air Force experiment.

“Some of our first projects were with the Air Force to do mobile ad-hoc networks, voice-over-Internet-protocols using small unmanned aircraft to pop signals through,” he said.

Translated for laymen, the experiment was to provide wireless communication—via what were basically flying WiFi hotspots for both voice and data—to soldiers on the ground in remote areas, such as in Afghanistan.

“Much of the capability that we now deploy for our civilian applications leverage some of the technology that we’ve done for the military,” Argrow says.

And the opposite is true too. The Tempest’s airframe was designed at CU specifically for the storm study, but it’s also been used in experiments by the U.S. Naval Research Laboratory to launch smaller aircraft called CICADAs (which is short for Close-In Covert Autonomous Disposable Aircraft). They’re the size of birds, and because they’re built as gliders, they’re almost impossible to track after they’re launched from beneath the wings of a Tempest. They can be used to deliver remote sensors and imaging equipment to specific targets, capable of landing within 15 feet of their programmed destination—meaning CICADAs are perfect for dropping spy gear behind enemy lines without risking the life of a soldier.

Although CU has flown commercially produced unmanned vehicles known to have been used by the military (such as BAE Systems’ Silver Fox, which has been used in Iraq to patrol for insurgent activity), all of the current aircraft flown by university researchers were built and designed at CU. The current focus of CU’s fleet is on storm chasing.

“We work as part of a team of hundreds of scientists with over 40 vehicles that were coordinated to go out and roam the Great Plains and intercept these storms,” Argrow says. “We intercepted six super cells between May 2010 and the last intercept on 10 June, 2010, in Kansas, Nebraska and Colorado.”

Flying an unmanned vehicle involves some red tape, which is why Argrow is so sure it wasn’t a CU aircraft involved in the close call over Cherry Creek. For one thing, none of CU’s unmanned vehicles can stay airborne long enough to travel from even the closest approved flight area to where the unidentified object was spotted. Air traffic control is notified of a planned flight and CU also issues a “notice to airmen,” alerting all general aviation pilots to the date, time and location of the flights. The FAA also requires operators to maintain visual contact with the aircraft at all times. Were an unmanned vehicle to become lost or lose touch with the ground crew, they’re designed to return to a predetermined flight path after a certain amount of time without communication.

“Part of our mission is to enable scientists and others to acquire the data that they need,” Argrow says. “If they need to make a measurement to enhance a model or help with their understanding of how things work, our job is, ‘How do you do that?’”

Argrow admits many of the technologies RECUV develops could be used by law enforcement agencies for the sorts of things that make drone critics nervous. But he’s quick to add that that isn’t the program’s focus.

“We don’t have any contracts or anything where we’re working directly with law enforcement,” he said. “But the systems that we’ve developed would be applicable for law enforcement if there were interest to do it. There are commercial solutions to that.”

One of those commercial solutions was spawned from the work RECUV has done. Jack Elston, a CU graduate who developed four unmanned aircraft systems for the university’s program, heads the recently started Black Swift Technologies, a private company that will develop unmanned vehicles for “a host of end-user applications such as large scale agriculture, livestock ranching, and disaster relief,” according to its website.

It’s a safe bet Black Swift’s customers won’t be calling them drones, either.