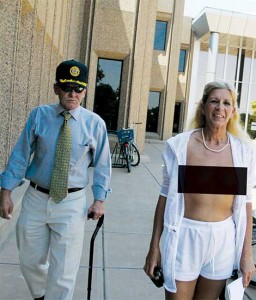 To hear Bob Pierce describe it, the scene inside the Boulder County Courthouse on Tuesday, July 19, was pretty bizarre. It all started when his wife Cathy was prevented by a sheriff’s deputy from entering the courthouse. She was clad in sneakers, shorts and, on top, nothing but a see-through mesh sun top.

“He said, ‘You’re dressed inappropriately,’ and I said, ‘How?’” Cathy recalled a few days later. “He said, ‘I can see your nipple.’”

By now, Cathy’s nipples have been seen by an untold number of people and, like the deputy that day, not all of them have been happy about it. As long-time nudists and naturalists, Bob and Cathy see nothing wrong with showing a lot more skin than others are comfortable with, but as long as they’re indoors, no one cares what they do. The trouble is that one of their main hobbies is gardening. And their yard has no fences. And it’s a block away from the K-12 Shining Mountain Waldorf School.

Bob and Cathy have lived in their North Boulder affordable housing community (which is managed by Boulder Housing Partners) since 2001. In the first several years, there were no complaints: Bob gardened in a thong, Cathy in a small bikini. But in 2009, Bob encouraged her to go au naturale from the waist up. That’s when the trouble started.

It began, predictably, with a concern for the kids — police received complaints about the nudists from concerned parents. But the Pierces say the kids themselves were more of a problem than they were; they say they were peeped at through their windows, and subjected to prepubescent jeers and shouts. They suspect the kids’ parents not only allowed the harassment, but encouraged it.

The Pierces held their ground because they knew they’d done nothing wrong. In Bob’s words, “Breasts are legal in Boulder.”

More to the point, baring them is legal. It’s one of those “only in Boulder” sorts of things that most other communities never have to grapple with. Since the 1980s, women can walk around topless in public, just as men can. But as the Pierces discovered, even some cops aren’t aware of it and they found themselves citing the law to more than one person with a badge. Police asked her to consider the kids at the nearby school and put on a shirt while gardening. She considered it and decided
not to.

With the lines thus drawn, the Pierces say the harassment continued. This time, it took the form of police cars parked across the street for hours at a time and days on end, even though there’s a local police substation just a few hundred yards up the street. The Pierces videotaped the cops and, on occasion, noticed the cops photographing them. Cathy said neighbors would drive slowly around the neighborhood, over and over, when she was outside tending to the magnolias near the curb, making her feel uncomfortable and vulnerable. On one occasion, the garden was vandalized. Fox pundit Bill O’Reilly even called her a “pinhead” on the air after they spoke in opposition to City Council’s plan to amend the nudity law to require women to cover their breasts (the measure was dropped). She and Bob say they felt intimidated and threatened.

So they decided to sue, alleging ongoing harassment, stalking and conspiracy against at-risk adults (Bob has PTSD and disabling back pain requiring him to walk with a cane; Cathy has injuries from various car accidents over the years). They sent the city a notice of intent to sue, naming the city, the police department and several individual police officers as defendants. Cathy says they want $100 million in damages. Then they headed down to the county courthouse to get the necessary paperwork.

That’s when things got weird.

When the deputy spied Cathy’s see-through shirt, Cathy says he originally threatened to charge her with indecent exposure if she tried to enter the courthouse. But indecent exposure only applies to the exposure of genitalia. Then they threatened to arrest her for trespassing. Bob demanded the Boulder police be called, and he said they responded in force, showing up in four or five vehicles. While Cathy waited outside to see if she’d be allowed in, Bob, who was fully clothed, entered the building and removed his shirt in protest, continuing to argue with the deputies. Anyone with business at the courthouse that day must have surely been baffled by the heavy police presence, a half-naked woman and a raving shirtless man with a cane at the clerk’s counter.

The Pierces eventually left, but they tried again the next day, with Cathy dressed as before. She didn’t make it through the metal detectors, threatened this time with disorderly conduct.

“Her breasts are not going to start a riot,” Bob said on the third day, as Cathy prepared again to get past the deputies on duty. “They’re not going to cause a child to go mentally insane. It’s the human body.”

Still, though Cathy said she fully expected to be arrested on her third try, she wasn’t backing down.

“They’re denying me the right to go in there and get the paperwork I need to file the lawsuit,” she said, flatly refusing to wear something more modest than the white mesh sun top. Because it’s not really about her nipples, the Pierces say; it’s about knowing your rights and being willing to fight for them.

“I know my rights,” Bob said. “And I know that if you take them away from me, you’re not going to get them back.”

Sgt. Thomas McGrath knew the Pierces were coming for a showdown. As the sheriff’s deputy responsible for courthouse security, McGrath had never encountered a situation like this before. Although many of the judges have dress codes for their courtrooms, there are no laws, rules or ordinances that say how (or how skimpily) people can dress in the common areas like the corridors and the lobby of the clerk’s office. But McGrath was pretty sure that a semi-nude woman walking the halls would cause a significant enough disruption to courthouse operations that he should find a way to stop it.

“Though the city doesn’t have an ordinance or law that they would cite you for being topless, to me it would still create a disruption,” he says. “For that we have laws under unlawful conduct, or disorderly conduct. We were looking at trespassing and then obstructing government operations. We were looking at a number of laws that for her to come in topless would, in and of itself, cause a disruption inside
the courthouse.”

Cathy’s near nudity commanded a lot of resources. McGrath said he’d been in email discussions with Sheriff Joe Pelle, the county attorney’s office and Chief Justice Roxanne Bailin about what to do. The judge, the lawyers and the cops had reached a decision just 10 minutes before the Pierces showed up to test the government’s resolve to keep them from entering the building.

McGrath met them in the courtyard.

“What’s your plan?” the buzz-cut sergeant in his heavy body armor asked the petite, nearly-naked 54-year-old woman. Another officer looked on near the door, thumbs hooked in his utility belt.

“I plan to go in there and get the paperwork I need to file my case.”

Cue the far-off cry of a hawk as everyone imagined Cathy getting cuffed and tossed in a squad car, all because of her nipples. But the decision reached just moments before did not involve tossing her in jail.

“The sheriff’s suggestion was that there really is no law out there that addresses this and it was his suggestion that we let them in the building,” McGrath said later. “Judge Bailin agreed with that. …As for the mesh top, I appreciate the fact that they gave at least that much respect to the court, but if it hadn’t been there, I would have been between a rock and a hard place.

“It’s a public building, and their beliefs on how they want to live their lives on the outside is one thing, but here inside the building, it can create a conflict,” he continued. “It’s not for me to interpret the law, I’m just here to uphold it, but I also have to maintain some kind of peace within this building.”

In the end, McGrath escorted her inside and she stood at the counter like every other customer that day, even though she was the only one shadowed by cops who looked ready to pounce as if she were an Al Qaeda leader.

Leaving with her paperwork, she flashed the V for victory sign.

But in a subsequent voicemail to Yellow Scene, Bob Pierce said it was no such thing. He doesn’t consider it a victory to be escorted through a public building, and he promised that the confrontations aren’t over yet.

Considering that Bob has yet to file the lawsuit he has planned — which will require at least one more trip to the courthouse — that seems obvious.

As for how he’ll handle future encounters with the Pierces, McGrath is going to take it one bared breast at a time.

“I’ll cross that bridge when we come to it,” he said.